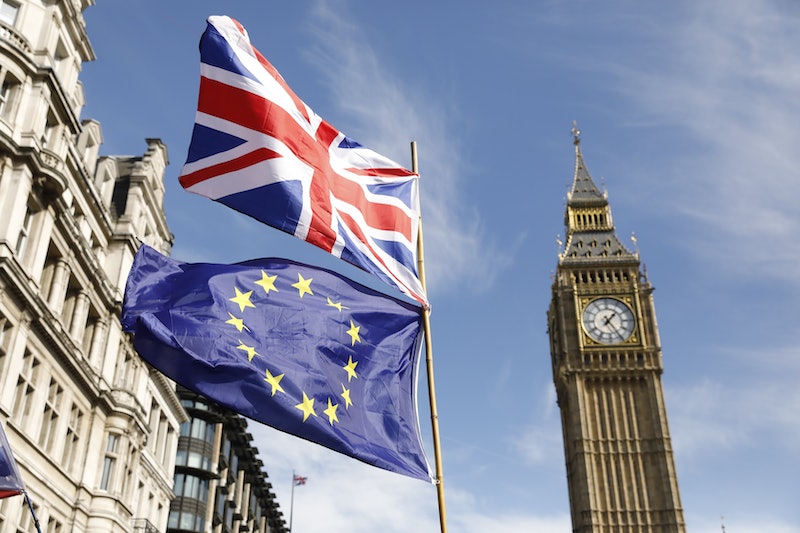 On Monday night, the Guardian and various other news outlets reported that the Labour party has called for the House of Commons to vote on whether or not a second referendum should be held. For some, the prospect of a second referendum has them wondering: what would a people's vote ask? Understanding the ins and outs of a possible people's vote — another name for a second referendum — may seem a little daunting at first, but once you manage to break through all the Brexit jargon, it's actually pretty simple. Here a brief overview.

First off, it needs to be noted that, even though it appears that Labour are in support of the possibility of a second referendum, this does not guarantee it will happen. The party are actually just asking for a Commons vote about whether a public vote should take place. And this will have to be carried out in the Commons extremely soon, as the Article 50 deadline is only a couple of months away (Mar. 29), as the BBC reported back when it was triggered in 2017.

If you're not as clued up on Article 50 as you'd like to be, don't worry. In short, it's part of the Lisbon Treaty, which is an agreement that was signed up to by all EU member states in December 2009, the BBC reports. Article 50 asserts that, if a member state wants to withdraw from the EU, it "must notify the European Council and negotiate its withdrawal with the EU," the BBC writes. Article 50 gives the parties involved a period of two years to reach an agreement (unless there is a unanimous decision between all the EU member states to extend it), and it disallows the exiting state to partake in EU internal discussions about its departure, according to the BBC.

No country has ever triggered Article 50 before, hence the constant air of uncertainty surrounding the Brexit process. There is no blueprint to follow when it comes to exiting the EU in this manner. Anyway, if no deal is reached between the EU and the UK by March 29, the 21-month transition period (initially planned to take place between the signing of the agreement and the actual enactment of its terms) may not come into play. This would mean that "consumers, businesses and public bodies would have to respond immediately to changes as a result of leaving the EU," according to iNews.

Despite the fact that there is a very short amount of time between now and the deadline for an agreement, there is still a chance for a second referendum to take place.

While a people's vote would certainly not be as simple as the first referendum, it would probably follow the same principle. So much so that the People's Vote Campaign has put together a handy table on page 13 of their Roadmap To A People's Vote document that details the possible questions that could be on the ballot.

Compiled by the UCL Constitution Unit, the table suggests that voters could be faced with the following options:

However, even if a second referendum is somehow miraculously put on the table before the March 29 deadline, I can already sense that Brexit is going to end up being Britain's very own Groundhog Day (*sigh*).