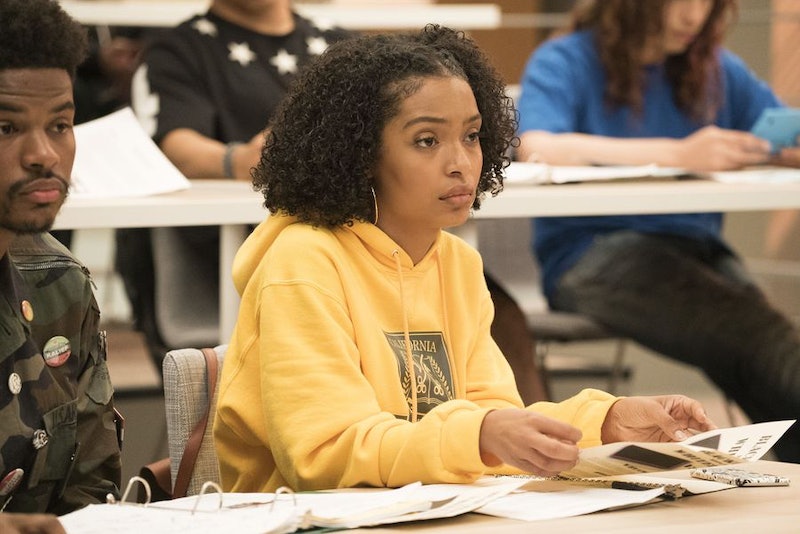 Attention, black-ish fans — grown-ish is nearly here (airing on Feeform on Jan. 3), and with it comes a whole new set of stories for Zoey Johnson, the eldest child of the Johnson clan. She’s all grown up now (well, ish), and she’s off to college. The show is about Zoey’s experiences dealing with school and coming into her own, but where would she be without a little help from her parents every once in a while? Will Zoey’s black-ish family be on grown-ish? We’ll be seeing the Johnsons here and there and probably on Parents’ Weekend, too.

Zoey is the eye-rolling, says-what-she-means teen of the Johnson family, and she’s probably in a for a rude awakening when she shows up at school (as most freshmen are). College is a transformative experience, but sometimes, you just need a little help from your parents, and a little bit of parental cash never hurts, either. Fans of Dre and Rainbow are in luck, because Zoey’s parents will indeed be on grown-ish. As grown-ish star Yara Shahidi told the New York Times, “Yes, you do see my TV parents, and you see me on black-ish as well. grown-ish is very distinctly Zoey’s journey, but it’s not as though she is some lost child.” She has to do laundry some time, you know?

That being said, grown-ish is not a watered-down version of black-ish. Zoey will have her own experiences, both good and bad, and Dre and Bow won’t always be there to rescue her. As Freeform president Tom Ascheim told The Hollywood Reporter, "In this one, the students are at the center of the show. It's Zoey's story and there's this other great cast around us that are part of her story." And that story is different than the one that black-ish fans would be used to, explains Shahidi.

“It's edgier. It's not what we're used to seeing of Zoey or many kids. What I really loved is that it allowed us to relish our youth in a way that isn't usual on network comedies. Because [Freeform is] so aware of their demographic, we were allowed to tell those storylines without so much [interference].”

And that lack of interference will lead to much more interesting plots, because Zoey and her friends tackle issues like drugs, parties, sex, midterms, love, and politics, all through the lens of a younger person. The world is hard, and there are no concrete answers, even for grownups. “Our cast is extremely diverse, not only in ethnicity, but in terms of [ways of] thought, and it’s allowed us to have a lot of fascinating conversations,” Shahidi told Vanity Fair.

“I realized for most of my life I’ve had to relate to white men, to see myself in Holden Caulfield — to say I understand him as a character. [With grown-ish] we have characters [where] you can’t help but relate to at least one of them. I feel like that’s really important in terms of setting precedent.”

By going to college, Zoey's worldview is likely going to shift and she’ll be in for a lot of lessons. grown-ish creator Kenya Barris says that’s the goal. “[Sitcom] A Different World, for me, was in a lot of ways responsible for me going to college,” Barris told Vanity Fair. “I wanted to go to a black college, and I wanted to get out of Los Angeles. It’s just a natural part of all of our journeys, that idea of leaving home.”

All in all, Zoey will tackle college on her own, getting by with a little help from her friends, but she’ll need her parents occasionally, too — and you can expect to see them all at times on grown-ish, starting Jan 3.