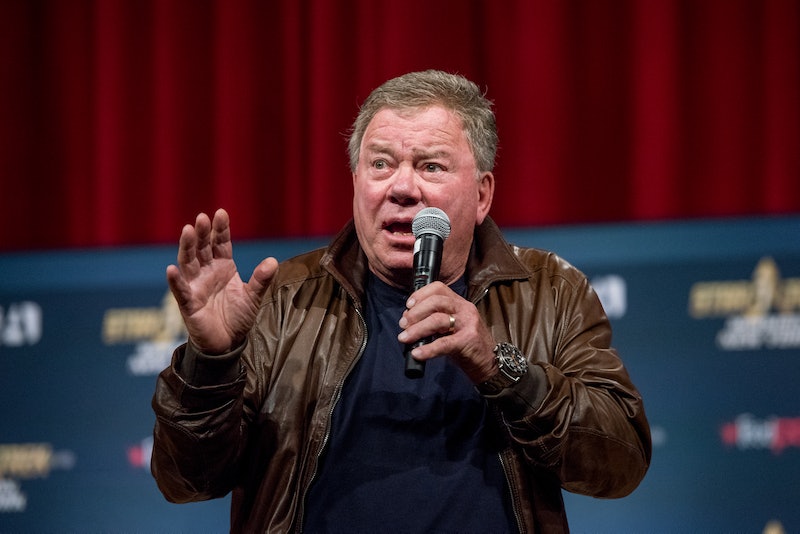 They may have been universes apart on camera, but William Shatner and Carrie Fisher shared a real-life experience that sounds like it was one for the history books. On Monday, a Twitter user @area_matter_mk3 tweeted at the star (no pun intended) of the iconic Star Trek series, Shatner, asking, "Has anyone ever brought star wars stuff for you to sign?" The actor tweeted back, responding, "Carrie Fisher wanted me to sign one of her slave Leia photos. Does that count." Shatner didn't explain how his encounter with Fisher unfolded, but fans are rejoicing at the fact that it happened... even if they do have questions.

Perhaps the most pressing question fans on Twitter have is: Did he sign it? Assuming he did, hopefully he'll provide Twitter users with the closure they're looking for. Seeing as how Shatner was one of the iconic faces of Star Trek, and the late Fisher was a key part of the Star Wars franchise, it seems peculiar that their worlds would overlap in this way. But when you take Fisher's notoriously dry sense of humor into account, it actually makes perfect sense.

Fisher became a feminist icon for her role as Princess Leia in the iconic movie franchise. Her sexy slave costume, referred to as her "metal bikini" in 1983's Return of the Jedi, instantly became a classic pop culture fixture as well. Needless to say, fans are loving this little story, as ambiguous as it is.

But still, we need to know...did he sign it or not?

Shatner, who famously played James T. Kirk in the Star Trek series from 1966 to 1969, actually has an interesting tie to the Star Wars franchise. In 2016, Shatner admitted Star Trek existed because of Star Wars, as reported by io9. As shocking as the revelation was for die-hards, it could've actually brought the two fandoms together.

At a Star Wars convention in Las Vegas, the actor said, "Star Wars created Star Trek. You know that?” Shatner explained the series owed its success to the original 1977 film Star Wars Episode IV: A New Hope, even though Star Trek was released nearly a decade prior. But the Star Trek series was originally cancelled after three seasons with little promise of being revived.

However, Shatner explained its eventual comeback with Star Trek: The Motion Picture in 1979 (two years after Star Wars) because of fans' reignited passion for sci-fi. "Every year, there was the threat to be canceled. The third year, we were canceled, and everybody accepted it," he reportedly explained at the convention. "At Paramount Studios, they were running around bumping into each other. 'What do we got?! What do we got to equal Star Wars?' There was this thing that we canceled, under another management, it was called Star Trek? Let's resurrect that!"

Still, he acknowledged how the two franchises differed, at least from his point of view. "Star Trek, at its best, tells human stories," he explained. "Star Wars was grand, like opera. It was huge with great special effects. It was a marvelously entertaining film, but it wasn't specifically about people the way those Star Treks were.”

In light of Fisher's untimely death at 60 in 2016 due to cardiac arrest, Shatner paid tribute to her on Twitter. "I'm deeply saddened to learn of the death of Carrie Fisher," he wrote. "I will miss our banterings. A wonderful talent & light has been extinguished." In a heartbreaking turn of events, Fisher's iconic mother Debbie Reynolds passed away just a day later at age 84.

Fisher's legacy will never be forgotten, with or without that iconic photo that might just sport Shatner's autograph.