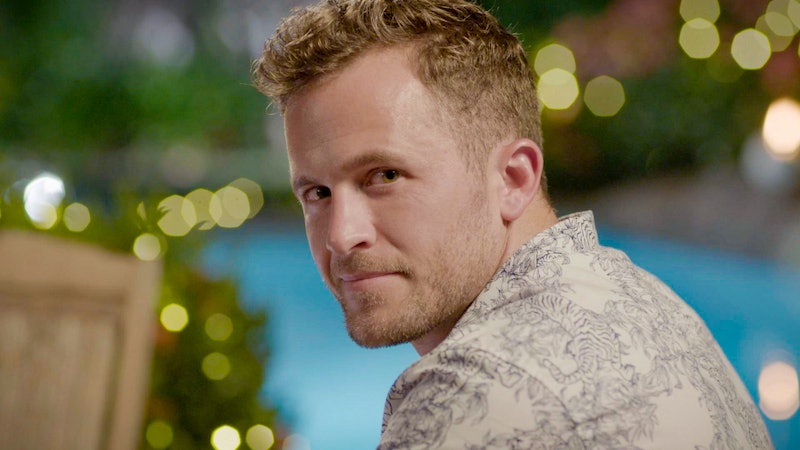 After a devastating double elimination on Love Island, the Islanders could use some time to rest and recover. Unfortunately for them, there's already a new man wheeling his suitcase into the villa. Big Brother alum Winston Hines is Love Island U.S.'s newest addition, and he's ready to shake things up.

Hines competed on Big Brother Season 20, which is why the Love Island narrator referred to him as a "familiar face." Upon his arrival at the villa, the Kentucky native wasted no time in making big moves, inviting Kyra — who's currently in a pretty solid couple with Cashel — on a date. We'll have to wait until Thursday night's episode to see how that plays out, but it seems like Winston won't be the only former Big Brother guest making an appearance. His fellow Big Brother 20 pal Brett Robinson has been teasing heavily on Instagram that he'll be joining the show, too. "Who wants to see your favorite dynamic duo in the @loveislandusa villa....? Premiers at 8pm ET tonight. Stay tuned for some exciting new" Brett captioned a photo of him and Winston lounging on two beach chairs at what looks like the Love Island villa earlier this month.

Outside of the CBS reality television family, Hines works in pharmaceutical sales, lives in Kentucky, and has a very cute dog. In his Big Brother bio, he described himself as "active, ambitious, and passionate" and said he enjoys "hiking, long walks or driving with my dog, working out, and watching movies."

According to social media, Winston was previously "#lookingforwifey" at Chili's, but apparently he didn't find that special someone. Hopefully he'll have more luck at the villa. Kyra and Cashel have been pretty into each other since coupling up, but Cashel came on pretty strong to Christen when she arrived, and Kyra has expressed hesitation about letting herself fully open up to Cashel. So, there could be an opening for Winston to break up one of the villa's strongest couples.

Plus, as a CBS alum, Winston is bringing more than just good looks and Southern charm to the show. He already knows how to play the game. Big Brother is all about strategy, maybe even more so than Love Island. Winston understands the importance of forming alliances and winning over everyone in the villa, not just the girl of his dreams.

That being said, he also has the audience to worry about. This week's final (or so we think) elimination will be chosen by the fans at home, who don't really know much about Winston yet or have a big reason to root for him. Could Winston be out as soon as he's in? Or could the audience punish Yamen for breaking Alanna's heart, and dump him on her behalf? Could Cashel's shady behavior be exposed by the voting? It's up to us this time. Winston arrived on Love Island to some metaphorical stormy weather, and let's hope for his sake that his navigational skills are where they need to be to stick around.