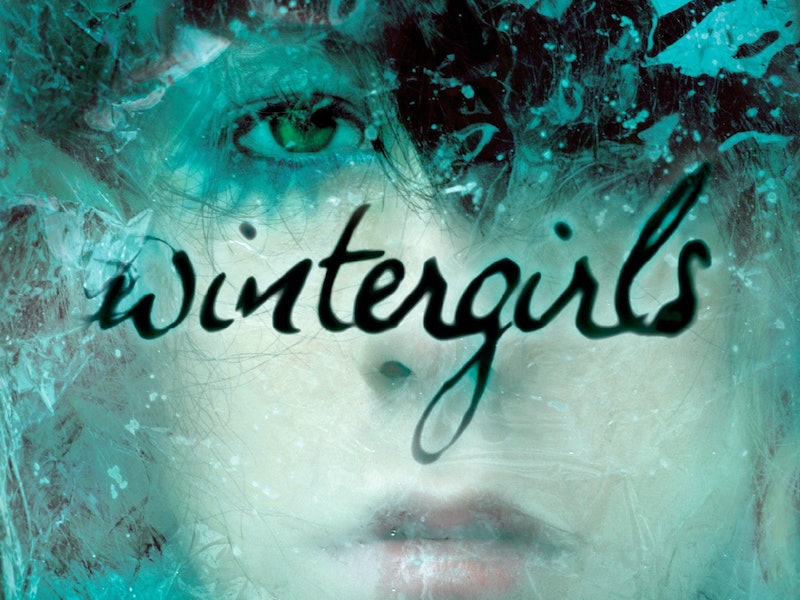 "I’m worried about you. I’m scared that you’re getting sick," a friend texted me, what seemed like a lifetime ago. After my first major breakup, my chronic depression was at its worst. I lost weight, my appetite was gone, and I started and ended every day with my head in the toilet. “There’s a great book about eating disorders I think you should read called Wintergirls by Laurie Halse Anderson,” she told me.

Warning: This article contains information about eating disorders, suicide, and self-harm, which some may find triggering.

I finished a digital copy of the book in a day. I adored the imagery and the prose, and I was infatuated with protagonist Lia Overbrook: Why couldn’t I be as thin as her? Why didn't I have the willpower to be her size?

Wintergirls was published in 2009 by the acclaimed author of Speak, a novel about sexual assault; it was a New York Times best-seller, and it received glowing reviews, including one from The Guardian that described the book as an “intoxicating story for teenagers.” The story centers on 18-year-old, Lia Overbrook whose struggles with anorexia and self-harm become even more challenging after her best friend Cassie, dies as a result of complications from bulimia.

It was one of my favorite books — yet, the weight loss methods, calorie counting, and goal weight tracking that are mentioned frequently in the novel took over my life. Soon, I began mimicking Lia's methods of losing weight. From Wintergirls, I learned how to cut myself, and I learned how to hide it from my family and friends. I haunted the same websites Lia did. I counted calories like she did. I became a “wintergirl” — a girl "who is half alive and half dead."

This is why books about eating disorders are needed: To increase awareness of a deadly disease. But, if written without sensitivity, books also have the power to do just as much harm as good.

I have no doubt that Wintergirls was written with the best of intentions. According to a Q&A published on her website, author Laurie Halse Anderson wrote the book after receiving letters from readers with eating disorders. She says she was also encouraged by her friend, a doctor, who “felt that there really hadn’t been a good novel written about eating disorders.” (Bustle reached out to Laurie Halse Anderson via her publicists at Penguin Random House, but did not receive a comment as of publication of this article.)

But, if written without sensitivity, books also have the power to do just as much harm as good.

One of the fatal flaws of Wintergirls may be that it’s too well-written. I was certainly enthralled by this "fairy tale" about a fragile, porcelain girl on her quest to become “the skinniest girl in school.” It is easy to forget that you are reading about a person with an eating disorder, especially while reading lines like “I am the space between my thighs, daylight shining through," or “Adrenaline kicks you in when you’re starving. That’s what nobody understands. Except for being hungry and cold, most of the time I feel like I can do anything."

Anderson also uses stylized text to illustrate Lia’s disordered thoughts. She covers multiple pages of the books with slogans like “Empty is good, empty is strong” and “I must not eat." She strikes out the words “I must eat."

While this is an unusual and interesting way to illustrate intrusive thoughts, without proper context, these pages function as a collection of destructive mantras with no counterpoint. For me, the experience of reading this book was akin to the experience of reading "thinspo." Short for "thinspiration," thinspo is used to describe photos, blogs post, quotes, and diet tips that are meant to “inspire” someone to become dangerously thin. Thinspo can be found on Pinterest, Instagram, Tumblr, and personal blogs. While no studies have been conducted on the effects of thinspo, an eating disorder treatment center in Chicago says that “30–50% of its teen patients used social media as a means of supporting their eating disorders.”

Certainly, I used social media and books as a means of supporting my own eating disorder. I even used the same mantra as Lia: "Empty is good, empty is strong." I'm not the only one who did so.

Blogs devoted to promoting anorexia (called "pro-ana" blogs) use direct quotes from the novel as thinspo, like the quotes I have mentioned above. One post on Tumblr — which I will not link to here — shows a woman with a flat stomach, her ribcage clearly visible through her skin. The image is accompanied by a quote from Wintergirls: "I keep thinking that I could just unzip my skin, step out of my body, then I would see who I really am."

Eating disorder specialists, including Julia Valente, a primary therapist at Futures Recovery Health Care, disagree with Wintergirls' romanticization of eating disorders. "I don’t know, as a licensed therapist, that I believe [young adults] don't yet have the cognitive stability, experience, or intellectual discernment to be able to sort through what’s really happening in that novel," Valente tells Bustle. "I think that a young girl who has all the parameters for developing an eating disorder can be deeply disturbed and allured by it at the same time.”

"I think that a young girl who has all the parameters for developing an eating disorder can be deeply disturbed and allured by it at the same time.”

I spoke to other women who were personally affected by Wintergirls, including 23-year-old Camille, who has anorexia. She tells Bustle that she was 14 years old and in the beginning stages of her eating disorder when she read the book.

“There were so many details," she says. "Smartphones weren’t as big, so dieting and calorie counting apps weren’t accessible for me. It read similarly to how pro-ana and mia blog (pro-bulimia) tips do. There were things that would have never occurred to me if I hadn’t read them. Plus, the way it was written it seemed like Lia only failed because she got caught, but it also told you how she got caught. It was very romantic — even with the bad parts.”

Camille believes Wintergirls made her eating disorder worse. “It probably would have just stayed as a little insecurity but reading the book amplified it and made me go looking for the mentioned online groups and things like that," she says. "Everything spiraled.”

Valente has also noticed this effect. "I see it in therapy and have had conversations with young interns, who themselves have struggled with an eating disorder, about how the strong imagery and viscerally disturbing representations in this novel negatively affected them," she says. "I have spoken to adults who are in recovery or recovered from their eating disorder who have also talked about their emotionally negative experiences with Wintergirls."

In the years since Wintergirls' publication, the National Eating Disorder Association (NEDA) released tips for responsible media coverage, which state: “Don't focus on graphic images or descriptions of the bodies of eating disorder sufferers. Research proves that coverage dramatizing dangerous thinness can provoke a ‘race to the bottom’ among other sufferers." It adds that writers should not mention numbers. These guidelines are also standard practice in eating disorder recovery groups.

Valente adds that she believes Wintergirls has promoted a false stereotype about who suffers from eating disorders and what the disease looks like. “One of the reactions I have to Wintergirls is that it increases our cultural misrepresentations of eating disorders," Valente says. "We think of a young, white, affluent woman — and that couldn’t be further from the truth. It also perpetuates the cultural stereotyping of what eating disorders are."

According to the NEDA, black teenagers are 50% more likely than white teenagers to exhibit bulimic behaviors and Latinx are more likely to suffer from bulimia than non-Latinx. Additionally, 10 million men in the U.S. alone suffer or have suffered from eating disorders at some point of their lives.

Alex, a 19-year-old with anorexia, says that she has a hard time relating to the book because it doesn’t represent her experience. “I’m not white or rich and my family isn't supportive," she says. "I don’t have the money for treatment. I also have PTSD, depression, and social anxiety on top of anorexia. Almost no one with anorexia is just a one-dimensional person who has an extreme case of this illness and a perfect life otherwise.”

Laurie Halse Anderson, in contrast, believes her book has helped readers, and perhaps it has. On a Q&A published to her website, she says, "And I’ve heard from countless readers who said the book finally helped them understand that anorexia is not cool and starving is not beautiful – readers who have decided never to become wintergirls."

Valente, however, thinks the dangers of the book outweigh the positives. “It may jolt someone back into reality, but it could also propel someone further over the edge as well," says Valente.

So, is it possible to write a book about eating disorders without it being triggering? "Instead of focusing on the drama issue and the graphic nature, show what it actually looks like underneath the skin, in the psyche, and what the pain actually looks like emotionally, how it actually developed, the diversity of it," Valente says. "The hope afterwards — that is what I would like to see."