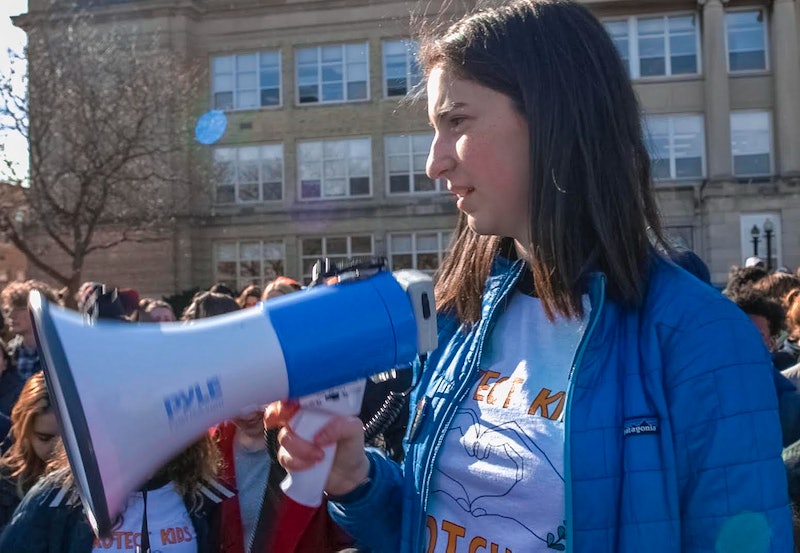 Katie Eder and Alemitu Caldart don't want the swell of gun control activism to end when the national March for Our Lives concludes Saturday evening. So the following day, the students at Shorewood High School, in a suburb of Milwaukee, Wisconsin, will join their peers from around the state to march 50 miles from Madison to Janesville, the hometown of the U.S. House speaker. They want to send a message to Paul Ryan that he has two options: take action on gun reform, or prepare to be voted out of office.

"We can vote him out," Alemitu Caldart, a freshman and an organizer of March for Our Lives: 50 Miles More, tells Bustle. "So if he's not going to do the things that are needed to have a safer community for everybody and to keep children safe in their own schools, he needs to understand that our lives matter way more than any gun."

Caldart, 15, is frustrated that she won't be eligible to vote for a few more years. But many of the teenagers who took up gun control activism in the aftermath of the school shooting that killed 17 people in Parkland, Florida, last month will be eligible to vote come November — and those too young to cast a ballot this year won't be far behind.

Caldart recently bought a new pair of red and white Rod Laver Adidas after Eder, an 18-year-old senior also organizing the march, told her she couldn't walk 50 miles in her Converse (although Caldart jokes that she still might try). An estimated 50 students will walk 13 miles a day for four days and sleep in local high schools along the route before reaching Traxler Park in Janesville, where they'll hold a closing gun reform rally on March 28.

The Wisconsin teens have the same demands as the national March for Our Lives: a ban on military-style assault weapons; universal background checks; and a ban on accessories that allow semi-automatic weapons to do more harm. The 50 Miles More marchers also want to enact a four-day waiting period on all gun purchases and raise the minimum age on all gun purchases nationwide to 21.

Ryan has the power to push forward these gun reform measures as speaker of the House. And Caldart and Eder want to signal that his job will be in danger if he doesn't. Ryan received more money from gun rights groups than any other member of the House in the 2016 election: $171,977. (Ryan's office did not return Bustle's request for comment.)

Although these Wisconsin teens haven't witnessed a school shooting themselves, they've grown up doing lockdown drills in preparation for one. As Eder points out, the deadly shooting at Columbine High School happened 19 years ago, but America's gun laws haven't been updated to stop further tragedies. Since Parkland, there've been nine other school shootings that involved at least one person being shot.

"The fact that we sit in our classrooms and think what would happen if somebody walked in here with a gun, or we walk down the hallway and say, 'Where would I go if I heard gunshots,' that is why this issue matters to us and why we want to fight to make a change," Eder says.

The student organizers took inspiration from the civil rights movement, particularly the 1965 marches from Selma to Montgomery in Alabama. The many similarities between the two movements isn't lost on them, either. Not only are the students marching 50 miles and then ending by crossing a scenic bridge into Traxler Park, but their march begins on the same day that the last Selma-to-Montgomery march ended 53 years ago. Young civil rights activists also were told their goals for racial equality were impossible to achieve, and Eder says that's exactly what's happening now to student gun reform advocates.

"People are saying it's impossible. Gun reform is never gonna happen. Gun violence is never going to end," she says. "And we're here. We're young people saying that it is possible, and that we're going to make it happen — just like they did in the '60s."

And just like the civil rights movement, the organizers of 50 Miles More want to show that gun violence transcends geographic boundaries. Shorewood, Wisconsin, may be 1,400 miles away from Parkland, but the fear of school shootings crosses state lines.

Eder says the first thing that went through her mind when she heard about the Valentine's Day shooting was, This could have been 17 kids at our school.

"We want to feel safe," Eder says, "and we’re going to fight to make that happen."

More like this
Buckingham Palace Aide Resigns Over “Unacceptable” Comments To A Black Guest
By Shahed Ezaydi
Joe Lycett Just Took HIs David Beckham Qatar Protest To A Whole New Level
By Sophie McEvoy
Iran Has Issued A Death Sentence Over Mahsa Amini Protests
By Catharina Cheung, Darshita Goyal and Maxine Harrison
What To Know About Martin Bashir After Watching 'The Crown'
By Bustle UK
Get Even More From Bustle — Sign Up For The Newsletter