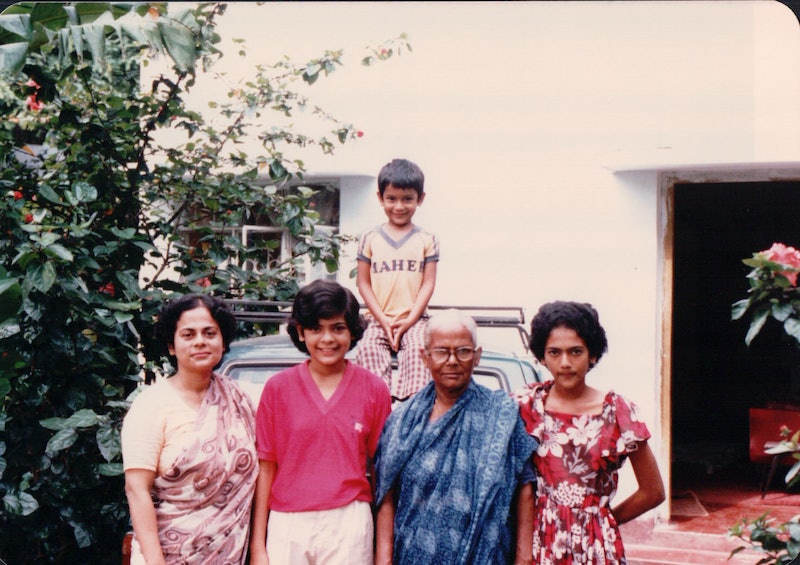 In 2005, when I was living in the Bay Area, my aunt emailed me a copy of a manuscript titled Recollections. It had been written in longhand by my late maternal grandmother, Meherunessa Islam, the first feminist I knew before I understood what feminism was. Part historical record, part memoir, her manuscript included both sweeping political statements and intimate personal anecdotes about growing up in British Raj India and becoming a working wife and mother post-Partition.

As a child, I didn't know what feminism was, but I knew early on that there was such a thing as a women's movement. More than this, I knew that uplifting girls was a mission. It had been the center of my grandmother's lifelong work.

But I didn't know the girl-woman in the manuscript. I only knew my Nanu, my tiny, dark-skinned, white-haired, globe-trotting grandmother, a School Inspector in now-Bangladesh who oversaw the education of girls, and who was always going off to a global conference about women.

In between her conferences, Nanu would visit us in Nsukka, Nigeria, bearing presents for me, my little sister, and baby brother: little wooden toys and jewelry, and clothes that smelled like her, of fennel and betel leaves and ironed cotton saris, and airplane snacks that we found exotic and exciting.

Nanu continued to visit us over the years, from Nsukka to Pittsburgh, where our family immigrated in the late 1980s. She kept our ever more-tenuous connection between continents alive. And she told us remarkable stories: of elephants that carried her across rushing rivers to inspect remote schools in united Bengal. Of visiting pre-civil-rights-America and her hosts having to get permission for her to use the whites-only bathrooms in the conference center. And of the Dhaka city girls she ushered to school in horse drawn carriages with the curtains tightly drawn so no one would know the travesty of female education.

Everyday, I would observe the girls reaching school, throwing the black coverings [burkahs] off and flying about the school compound like joyful free birds. — Meherunessa Islam (1921-2002)

When I started college, in Philadelphia, it was fashionable in certain sets to say you were a humanist rather than a feminist, the '90s prequel to All Lives Matter. I myself had a hard time explaining why women should get an extra word, a separate movement, despite knowing how vital my grandmother's work had been in Bangladesh.

Nanu may have never said the word feminism to me (although it appears multiple times in her manuscript), but my grandmother's very existence seemed to suggest opportunity, accomplishment, meaning. And certainly, in my highly privileged life, my progressive parents had never held me back, had imagined everything possible. I was not born the fourth girl of 13 children, like Nanu, with the words put salt in her mouth so she'll die lingering in the air.

It would take years to articulate my gut feelings about feminism. Gender discrimination and patriarchy is so encompassing and ingrained, women live in a completely different world than men. It's similar to how African Americans walk different streets than white Americans. And it starts early, sometimes even at a salt-mouth birth.

The events that have shaped the fate of history for centuries have totally left out the women who played a part in its making. Women are the product and the producers of history, but unfortunately their contributions have not been recorded. They have remained nameless and untraced. — Meherunessa Islam (1921-2002)

When I received Recollections, I was working in human resources at a university to support myself through writing school. I came across statistical reports that showed where affirmative action worked (more under-represented groups in entry-level jobs), and, perhaps more critically, when it didn' t (the failure of those programs to support and promote people to senior and tenured positions).

It reminded me of Nanu's sly and sweet description of her bridegroom-to-be:

A suitor who was agreeable and courageous enough to marry an educated working woman. — Meherunessa Islam (1921-2002)

It's not just affirmative action that we need. We also need allies, at home, on the streets, and in the workplace and government. It's the only way we might tackle the tremendous burdens of Nanu's startlingly prescient term the double shift women: Modern women who had merely multiplied their tasks by working outside the home.

I am laid low by how little I knew of my grandmother's storied life, visible only in bits and pieces in her manuscript. I could have asked her so many questions about her younger self, her early fears and ambitions, and what it felt like to be a woman, a Muslim, a working professional in the Subcontinent in the 1940s and onwards. And I wonder how much earlier I could have been a force for girls and women if I had known her longer, been around her more, instead of a month here and there, years apart.

What I have instead is no small treasure: her confident and clear spoken history of the women's movement in Bangladesh, unpitying and hopeful in equal measure. It even contains gentle marching orders any woman could (and should) follow.

While my personal account may not be very entertaining, it may encourage others to remember, research, and write their own personal accounts in order to become part of the social history of women, which is very much needed now. — Meherunessa Islam (1921-2002)

Without This Woman, I Wouldn''t Have A Closet Full Of Trophies (Or The Confidence To Win Them)