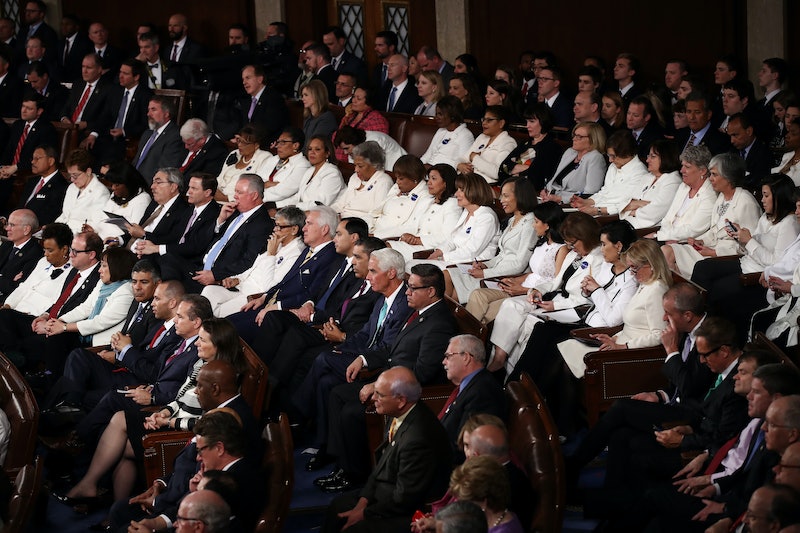 On Feb. 5, Donald Trump will deliver his second State of the Union address — and some in the audience will be making a statement as they watch. Notably, women lawmakers attending Trump's 2019 State of the Union have been invited to wear white to show solidarity in their support of women's issues. Indeed, wearing white clothing represents a tradition going all the way back to the women's suffrage movement, the Baltimore Sun noted.

CNN reported that the House Democratic Women's Working Group is organizing the white clothing initiative, which is open to members of both parties. Florida Representative Lois Frankel, the chair of the working group, described the symbolism behind the color to CNN. As Frankel told the outlet:

Wearing suffragette white is a respectful message of solidarity with women across the country, and a declaration that we will not go back on our hard-earned rights.

The Democratic Women's Working group also invited women representatives to wear white at Trump's 2017 joint address to Congress, CNN noted. At the time, NBC reported that Frankel said the color was intended to demonstrate congressional willingness to push back against Trump administration initiatives. "We wear white to unite against any attempts by the Trump Administration to roll back the incredible progress women have made in the last century," Frankel said in a statement via NBC.

Other prominent political figures have also worn white to important events, with many perceiving their clothing choice as a nod to women's rights and the women's movement. For example, as Vox reported, Hillary Clinton wore an all-white suit to Trump's inauguration after she was defeated by him in the 2016 presidential election. The New York Times noted that Clinton also donned white when she accepted the Democratic nomination for president — becoming the first woman to receive this title. Moreover, the paper reported that many of Clinton's supporters wore white outfits to the polls on Election Day as a means of showing support for her candidacy.

CNN reported that New York Congresswoman Alexandria-Ocasio Cortez wore white as she was sworn-in as a member of Congress on Jan. 3. In commenting on her outfit choice, Ocasio-Cortez acknowledged the history behind the color. As the congresswoman wrote on Twitter:

I wore all-white today to honor the women who paved the path before me, and for all the women yet to come. From suffragettes to Shirley Chisholm, I wouldn't be here if it wasn't for the mothers of the movement.

Indeed, as Vox described, the symbolism of the color white is rooted in the women's suffrage movement, during which women were seeking to secure their right to vote. Purple, gold, and white were the colors of the American suffragist movement and of the National Women's Party that was formed in 1916, Vox reported. The outlet noted that the Congressional Union for Women's Suffrage's statement of purpose indicates that purple symbolizes loyalty and gold symbolizes "light and life." Vox reported that the statement also reveals that white represents "the emblem of purity, [and] symbolizes the quality of our purpose.”

Overall, it's clear that, for many female politicians, acknowledging the history of the women's movement and working to ensure that women's rights are respected and promoted is an important part of their work. Many will choose to show their solidarity with each other and these issues by donning white as they gather in the House chamber for the State of the Union address on Feb 5.