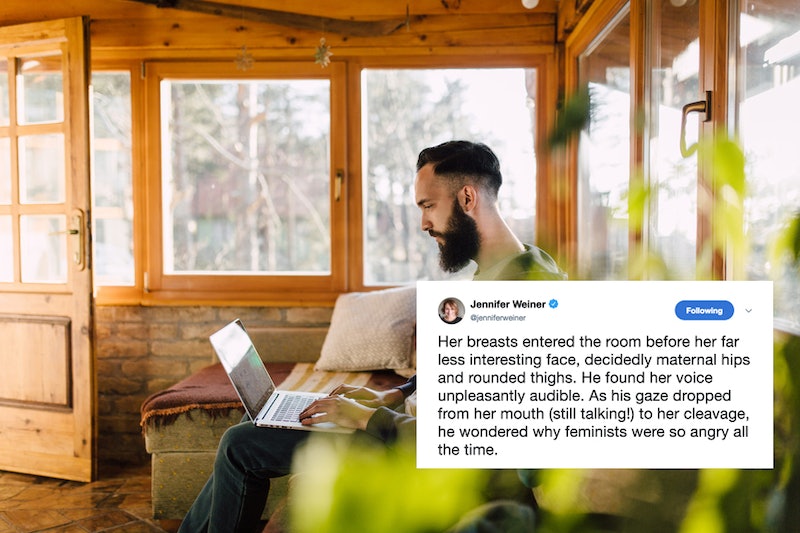 OK, so sometimes Twitter is a dumpster fire, but other times it really is pure gold. March went out like a lion this year, with book nerds and writers on the platform discussing how to describe yourself like a male author would, because, let's face it, a lot of male writers struggle with writing female characters.

Whenever the "men can't write women" topic comes up, I feel compelled to share this story. I once read a book by a man in which the two female leads, both in their 20s, went to the drugstore to buy a pregnancy test because one of them was late getting her period. That's a totally normal thing that people do, and even do together. But both women got flustered when the pharmacist commented on their purchase, and made up an excuse for buying the test, saying it was — I am not kidding here — for their dog. Every woman I know has had at least a few pregnancy scares by the time she's hit 25, so the pregnant dog excuse was not only unnecessary, but also, to me, a clear sign that the author did not know how women's sex lives work.

Twitter got on board with this after Among the Red Stars author Gwen C. Katz pointed out a different male author who claimed to have written "an authentic female protagonist," but whose description of said protagonist read like, well, just read it yourself:

"I sauntered over, certain he noticed me. I'm hard to miss, I'd like to think — a little tall (but not too tall), a nice set of curves if I do say so myself, pants so impossibly tight that if I had had a credit card in my back pocket you could read the expiration date. The rest of my outfit wasn't that remarkable, just a few old things I had lying around. You know how it is. [Emphasis mine.]"

If that excerpt reminds you of that one post about a female character who "breasted boobily down the stairs," it's because satire doesn't usually fall far from the reality tree.

Katz's tweet prompted podcaster Whit Reynolds to call for male-writer-esque descriptions of women, and boy oh boy did women respond. There were lots of boob jokes:

There was also some commentary on race (and more boobs):

And a reminder that all women are basically monsters:

Men cannot write me for the lizard person I truly am.