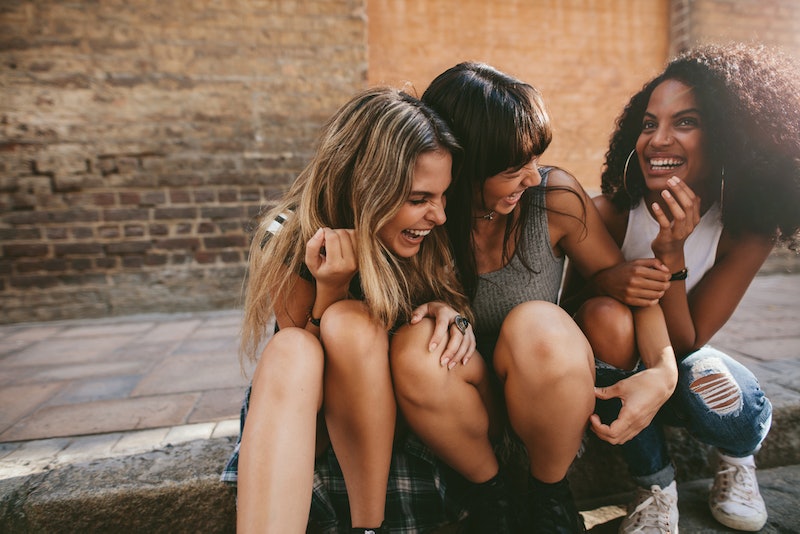 It's true. Your friends probably know you better than anyone else. They're the ones who have been there through all the breakups, first kisses, embarrassing encounters, as well as your favourite memories. After all, there's a reason the Spice Girls sang "If you wanna be my lover, you gotta get with my friends," because quite often, they're the ones who come first. And when your man does come along, and your friends approve, they still might offer you things that he can't. That might be why, according to a new study, women prefer their friends to their husbands.

In a study conducted by Champney's Health, 44% of the 1,517 women polled said they had things they could tell their friends but couldn't tell their husband. The ladies reportedly gave reasons like "we can talk about everything" and "she listens more" for picking their bestie over their man. And when quizzed on who they'd rather take on a boozy brunch, 30% reportedly picked their pals over their hubs. And, to top it all off, these ladies allegedly said that they'd have a better time if weren't any men around at all.

It's worth mentioning that only heterosexual women were polled. I wonder how the results would differ if women across the sexuality spectrum were polled. Who knows? This could just be a men specific thing, or maybe friends trump partners of any kind. And that definitely shouldn't put you off. Having close connections with your friends isn't just essential for you, it's vital for your relationship too. A study conducted by the University of Texas at Austin found that friendships can help improve our romantic relationships.

Their research concluded that “spouses who reported being more satisfied with the availability of friends and family, whom they knew they could connect with during times of marital conflict, experienced conflict as less physiologically stressful," which in less fancy language basically means that married people who have friends on hand during the hard times in their relationship experience less stress. I mean, it makes sense. If you're going for a rough patch with your partner, you'll probably get better advice from your pals than the person you're going through that tough time with.

There have been plenty of other studies that echo these findings — friends always come out on top. As Time magazine reported back in June 2017, a research paper in the journal Personal Relationships found that "Friends become increasingly important to health and happiness as people age". William Chopik, who led the research, said that "the really surprising thing was that, in a lot of ways, relationships with friends had a similar effect as those with family—and in others, they surpassed them.” So, don't forget 'em. Friends won't just be there to laugh at you through your grossest moments, they're also there to increase your general wellbeing. Now might be a good time to book that boozy brunch.