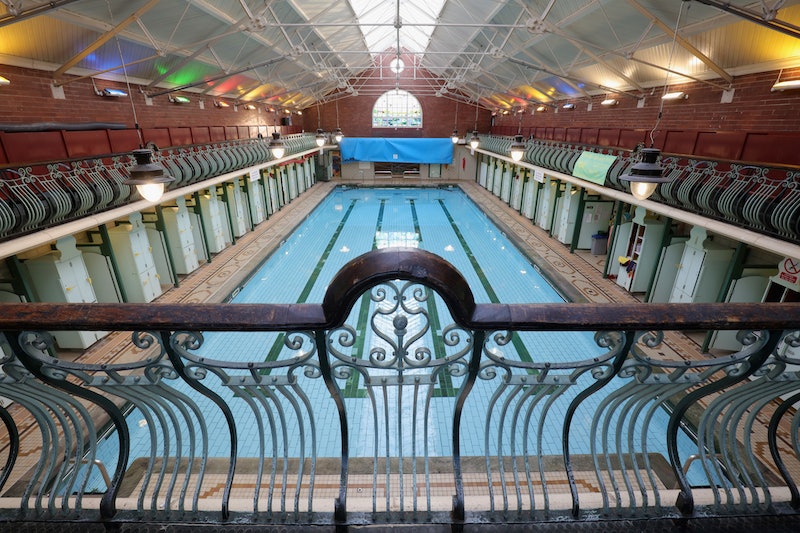 While speaking with The New York Times on Monday, women senators brought up the Senate pool, something you probably have never thought twice about. But who's historically been allowed — and not allowed — in it is pretty troubling. While senators have their very own gym, it wasn't until recently that women had equal access to its facilities. Up until 2009, in fact, it was essentially a boys' club.

This isn't the first time such concerning trends have been covered by the media though. Back in 2015, Politico reported on the oft-difficult and uneven political terrain that American women in the Senate face. Although former Sen. Kay Hagan of North Carolina was an avid fan of swimming, the outlet noted, her hobby came to a halt when she learned the Senate pool was reserved for men. Believe it or not, that didn't change until 2009.

It took the efforts of both male and female senators to change the exclusively-for-men nature of the pool. Senators like New York's Chuck Schumer, presiding over the Rules Committee, joined Hagan in pushing for switching things up and opening the pool to female senators as well.

With the focus on allowing female senators to swim too, it seemed like the Senate pool became more than that; it morphed into a symbol for newly-achieved equality between men and women on Capitol Hill. The New York Times noted that when Hagan lost her Senate bid in 2014, for example, her female colleagues gave her a farewell party by the very pool she once wasn't allowed to swim in.

While speaking with The New York Times, Collins was joined by a bipartisan panel of colleagues such as Democratic senators like Amy Klobuchar of Minnesota and Heidi Heitkamp of North Dakota as well as Republicans like Joni Ernst of Iowa. The panel discussed the various microaggressions women in the American Senate face.

Klobuchar shared a personal incident and said that a male senator, who she didn't name, once sternly told her that the elevator she was using at the time was only for senators. Klobuchar said, "I looked at him and I said, 'And who are you? I am a senator.'" Sen. Heitkamp detailed a similar incident from 2013 when her identity was questioned also. The North Dakotan Democrat said that a transit guard asked her if she was the wife of a senator to which she said, "I went, 'No, I am the United States senator from my state.'"

In 1932, Democrat Hattie Wyatt Caraway became the first American woman to complete an entire term in the Senate. Yet in spite of that monumental achievement, it's still more difficult for women than men to break into the world of politics. Sen. Collins told The Times that when it came to competing for a seat in the Senate, women were more likely to doubt themselves compared to their male peers. Collins said, "I have never, ever had a man say that to me, that he wasn’t quite ready. I think there’s a self-doubt and a hesitancy to take risks that we need to overcome." Given the way men have dominated the Senate — and the Senate pool — it's not hard to understand that hesitancy.

While the Senate's attitudes on women may be evolving over time, it still lags behind in equal representation. According to the Center for American Women and Politics, women represent only 21 percent of the United States Senate. The rest of it, for now, is a man's world. But with more and more women running for office, that's bound to change.

More like this
It’s Official: 'The Bachelorette' Is No Longer A Fairy Tale
By Samantha Allen
We’ve All Had Bad Sex. Nona Willis Aronowitz Is Talking About It.
By Sophia Benoit
The 5 Best Underwear For Preventing Wedgies
By Lisa Fogarty
Beyoncé & Madonna’s “Break My Soul” Remix Honors A Group Of Black Icons
By Stephanie Topacio Long
Get Even More From Bustle — Sign Up For The Newsletter