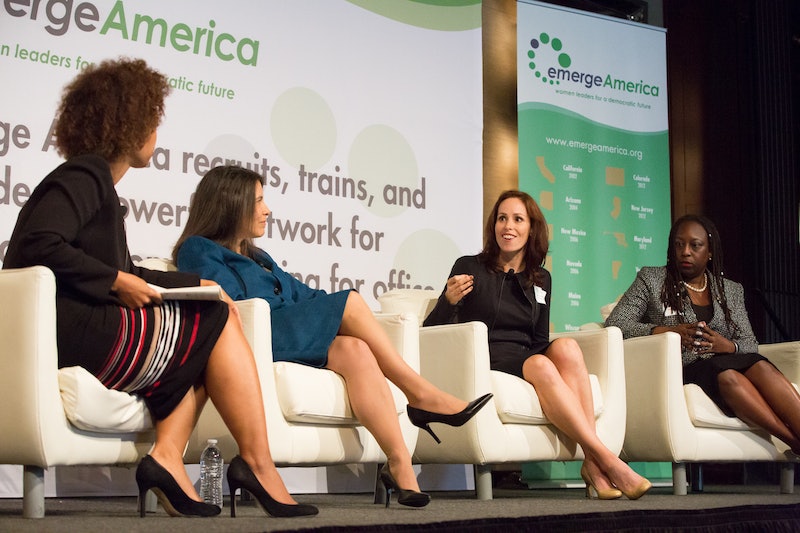 In the past six months since Donald Trump's presidential victory, an increasing number of women are determined to continue Hillary Clinton's legacy. As a way to create the political shift they wish to see in the United States, more women are planning to run for office, according to a number of recent reports. As public radio station KQED noted in a February report, "Early signs from the groups that work with women considering a bid for office suggest a level of intense interest not seen in at least a quarter century."

One organization that directly supports women looking to run for office is Emerge America, which provides 70-hours of training classes to Democratic women planning their campaigns. According to A'shanti Gholar, the political director for Emerge America, many of the 18 states the program reaches saw the number of people registering for classes in the days following the election not only increase, but double. Gholar believes the classes are critical not just from a pure educational perspective but for helping women develop the confidence to jump into the world of political campaigning.

"Typically, what's holding women back is they think they need more education, that they need to have a certain type of family dynamic, that they have to have a particular job," Gholar tells Bustle. "A lot of the women do want training, and [it] makes a lot of women comfortable when they know they can come to Emerge and get the training and interact with a lot of other women who have the same ambition and goals as them."

While many women have been motivated to run because of the example set by Clinton, shooting for races in the national spotlight isn't necessarily the best route. Gholar says that when it comes to shifting the political landscape, getting involved locally is the way to go. Because even if you don't personally run for office, you'll still be supporting the women that reflect your values.

"I think the first thing to know is to evaluate the political terrain before you run for office," Gholar says. "Is it the right race to run in? [T]he right time? Is it the right community to run in? The next part is to get involved in your community. You need to get yourself on a local board, start to volunteer, support elected officials in your area."

For Stephanie Martins, an Emerge America member whose running for Everett City Council in Massachusetts, the concept of preserving her local community is what drives her campaign. She shares with Bustle how the primarily white male city council — all but two of the 11 members are men — doesn't reflect the demographics in her community. "I think we need people who can identify with the issues that are happening with the community," she says, "and there isn't a lot of representation around here, or at the statehouse."

Martins also believes that adding new voices to local politics can not only shift the status quo, but also, hold career politicians accountable to the communities they represent.

"There are a lot of issues specific to the city, but the main thing that inspired me to run was to be the voice of the people," says Martins. "So much of the leadership has been in their positions so long [that] it's more about their title than listening to people. I also felt like the city was disconnected, and whatever happened in City Hall wasn't necessarily engaging the whole city. So, I wanted to give a voice to more people."

Lindsey Davis Stover, a member of Emerge Virginia recently declared she's running for Congress in Virginia in 2018. Stover tells Bustle that a desire to work on the local level and be involved in her community have built her political drive.

"Serving my community and my country has always been important to me." she explains. "After graduating from college, I served in the AmeriCorps VISTA program and still work hard to give back to my community. I teach Sunday school at my church, I coach my daughter's soccer team. I've created STEM programs for high school girls and have worked closely with veteran organizations to care for America's heroes."

"Today, more than ever," Davis Stover emphasizes, "it is important we all stand up and answer the call to serve our communities, our schools, places of worship, and our country."

When it comes to her campaign for Congress, Stover shares that her focus is on holding the government accountable to the diverse communities in Virginia.

"This campaign isn't about me. It's about working together to put the people of Virginia's 10th District and its communities first. That means working families, educators, veterans, farmers, small business owners, entrepreneurs — everyone," she says. "This campaign is about courage, the courage to fight for our future and put government back to work for us."

All of these women are showing how important it is to run for office. Breaking the glass ceiling can start in your own backyard.