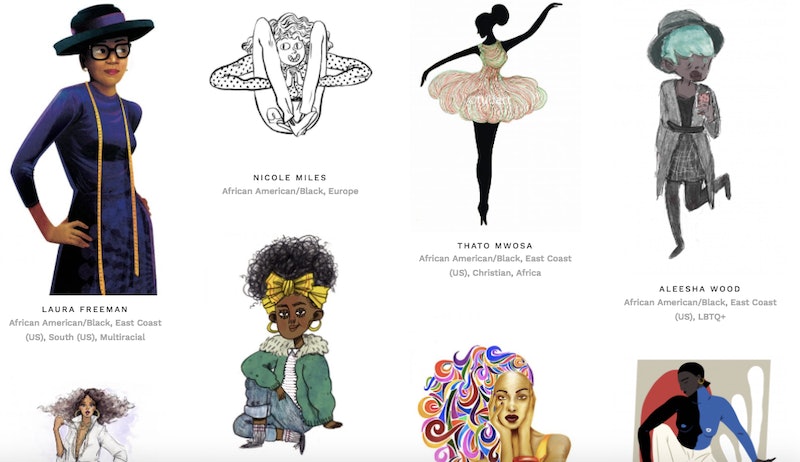 After a "soft launch" in December, Women Who Draw, a site dedicated to showcasing the work of under-represented artists and diversifying illustrated images of women in our media, has fully arrived — and its official launch at the beginning of January was so explosive that it literally crashed due to the number of eager visitors flocking to the site. "We received 1200 [submissions] in the first 24 hours and had to close," Women Who Draw co-founder Wendy MacNaughton tells Bustle. If that isn't an indication of how much representation matters, I don't know what is. In the days immediately following the January launch, MacNaughton, fellow co-founder Julie Rothman, and web designer Jenny Volvovski rebuilt the site so it would be able to sustain more artists — and with "over 1,500 submissions and counting" according to MacNoughton, here's hoping this is the beginning of a major movement.

Women Who Draw is described as "an open directory of female* professional illustrators" — the asterisk being especially important, as Women Who Draw bills itself as a platform for women, female-identifying, and LBTQ+ artists to connect with each other and find work. "It's important that art from all different kinds of people show up on magazine covers, in newspapers, on shirts or signs or wallpaper or whatever," explains MacNaughton. "Lesbian, Bisexual, Transgender, [and] Queer+ artists are less visible just due to general marginalization of the LGBTQ community, and sometimes, like any minatory group, they're pigeonholed by their identity."

That's where Women Who Draw hopes to help: Says MacNaughton, "By amplifying the voices of LBTQ+ artists — in this case, illustrators — people can simply learn more about these artists work and the diverts that exists within this group, and hopefully create more opportunities for LBTQ+ artists to be hired [and their] work to be seen."

The Women Who Draw site directory makes it easy for other artists and potential hirers to find and locate new talent with search functions under "race/identity", "religion," or "location" There's also a mini-interview with a chosen artist under the site's "featured" section; at present it's The New York Times art director Alexandra Zsigmond.

Simply put, this kind of visibility matters — a lot. A 2010 survey by 3x3 magazine discovered that of 527 women illustrators living in the United States the UK, Canada, Europe, and Asia/The Pacific all made less than their male counterparts on average — a gender wage gap no doubt helped along by a lack of visibility. And when it comes to artistic representation, unsurprisingly, male images dominate our magazines and media, too. For example, Sabrina Scott, a PhD student at Toronto's York University, analyzed how men and women female were represented in nearly 3,000 images from 2008 to 2015, according to the BBC — and found that white men appear in 55 percent of American Illustration (AI) award-winning illustrations on average, whereas the seven-year average for women of color was just four (four!) percent.

But there's hope, thanks to projects like Women Who Draw. In just its brief time fully launched, McNaughton tells Bustle, "We've heard back from quite a few participating artists who said they've already gotten jobs from the site." She continues, "As of right now, there are 875 artists on the site, and there will be more. We hope art directors, creative directors, editors, designers, and anyone else who hires illustrators and artists will use Women Who Draw as a resource for finding great talent."

Here's hoping the success of the site's launch is indicative of a turning tide in the illustrating world — because really, it's long overdue.