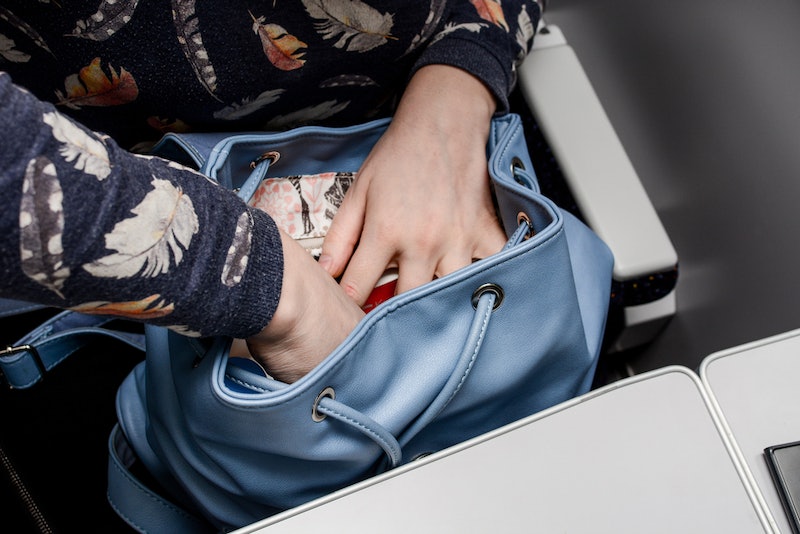 The first time that Whitney, 25, found herself in a psychologist’s office awaiting testing for attention-deficit/hyperactivity disorder (ADHD), she was just 7 years old. She tells Bustle she patiently sat in the waiting room, but as the appointment time came and went, she and her mom never actually saw the counselor.

“My mom suspected I was ‘different’ in first grade, but the psychologist dismissed it, and blamed my issues on my mom’s depression,” she says. It wasn’t until the fall of 2018, at 25 years old, when Whitney finally received a diagnosis of ADHD — along with the appropriate treatment that she’d been waiting 18 years for.

Many conversations about ADHD tend to focus on children, especially young boys, and how this disorder can negatively impact them at school. (While many people may think of ADHD as a learning disability, it is actually considered a mental illness because of the way ADHD can impact every aspect of someone's life.) Like Whitney, there are thousands of girls and women affected by ADHD long into adulthood, but the sexism and stigma that still surrounds ADHD often leads to a delayed diagnosis — which keeps many from receiving the mental health care they need.

While the organization Children and Adults with Attention-Deficit/Hyperactivity Disorder (CHADD) reports that an estimated 129 million children worldwide live with ADHD, it’s not a health issue that people simply “mature” out of.

“It used to be thought that adults grew out of their hyperactivity, but more recent neuropsychological testing demonstrates this is not the case,” Gary Kanter, M.D., an associate professor of psychiatry at the University of Florida, tells Bustle. “The hyperactivity is just less obvious, and characterized by fidgeting and moving in a chair, rather than the dramatic physical hyperactivity of childhood.” In fact, around 4% of adults also have ADHD, according to the National Alliance on Mental Illness.

ADHD is a chronic condition that “includes a combination of persistent problems, such as difficulty sustaining attention, hyperactivity, and impulsive behavior," according to Mayo Clinic. According to the American Psychiatric Association (APA), there are three types of ADHD: inattentive type, hyperactive/impulsive type, or a combined type. Inattentive symptoms include difficulties paying attention, avoiding longer tasks, disorganization, being easily distracted, or losing and forgetting things easily, while common impulsive or hyperactive symptoms of ADHD include fidgeting, interrupting conversations and activities, and constantly talking.

Another issue with adults seeking diagnosis is that many people — including mental health professionals — assume ADHD almost exclusively affects boys and men. Understood, an organization that raises awareness around learning disabilities such as ADHD, reported that not only are boys three times more likely to diagnosed with ADHD than girls, but they are diagnosed five years earlier than girls on average. Studies have also shown girls are less likely receive appropriate treatment for their ADHD (that is, if they are diagnosed and treated at all). It's also important to note that while non-binary people also live with ADHD, studies on how this disorder affects people who don't identify as male or female are limited.

I remember, as early as second grade, feeling shame for having to teach myself everything after the teacher explained it.

So, why the gender disparity? Kanter says, “Hyperactivity is more prevalent in boys, and inattention is more common in girls.” As VeryWell reported, girls with ADHD often have memory problems, trouble focusing, listening, paying attention, or staying organized. But these symptoms tend to be overlooked, because they aren’t as disruptive as symptoms like impulsivity or constantly moving, which boys typically present with. Some studies have also revealed girls with ADHD try to mask their symptoms by pouring extra hours into schoolwork (or work, as adults), and doing all they can to "fit in."

Alesia, a 45-year-old clinical social worker, is just one of many women who waited decades to receive a correct diagnosis of ADHD — despite displaying ADHD symptoms in elementary school that she says teachers, family members, and medical professionals routinely failed to take seriously. She was 35 when she was first diagnosed with ADHD while going through a stressful divorce.

“I remember, as early as second grade, feeling shame for having to teach myself everything after the teacher explained it. Paying attention was so rare, that I actually remember the few times I did [...] I was known as 'smart,' but a 'dingbat,’” she tells Bustle. Instead of hyperactivity, Alesia explains that constantly talking, spending money impulsively, and disordered eating were some of the ways her disorder manifested. She says growing up with undiagnosed ADHD was “emotionally painful.”

It’s also not unusual for women with ADHD to be misdiagnosed with another health condition altogether. “Depression and anxiety have symptoms of attentional difficulties, and may often be confused with ADHD,” Kanter says. ADHD also shares symptoms with autism spectrum disorder (ASD), substance use disorder, trauma, and even some endocrinological disorders. As Healthline reported, an estimated 60% of people with ADHD also have a co-occurring mental illness, and around 20% of adults with ADHD specifically have an anxiety disorder. Some research has indicated that women with ADHD are more likely to have co-occurring health conditions than men with ADHD.

Considering all these factors, receiving a correct diagnosis of ADHD, along with appropriate treatment, can be a long and difficult process for many women. Eight years before Alesia finally received her ADHD diagnosis, she was misdiagnosed with an anxiety disorder at 27, and prescribed an antidepressant. While she explains being on an antidepressant did help manage her ADHD a bit, her clinician’s decision to prescribe her a stimulant (a common medication used to manage symptoms of ADHD) in her mid-30s was life-changing. “I was shocked at how quiet and calm it was in my head. For me, living with ADHD was like having a radio station on static in my head, and Adderall turned the dial to a clear station,” she says.

Similarly, Whitney grew up attributing many of her ADHD symptoms — like impulsivity, inattentiveness, and interrupting people — solely to being autistic. It wasn’t until she received a dual diagnosis of autism and ADHD this past fall that Whitney began to make more sense of her symptoms from when she was younger. “Looking back, I now see the differences between my autism and [my] ADHD.”

Though diagnosing women with ADHD in adulthood does not come without its challenges, it’s far from impossible. “The diagnosis involves a detailed history from childhood on, and the impairments detailed throughout the person’s life," Kanter says. "Often helpful are the corroborative observations of family, and significant others.” Further, he explains that evidence-based screening tools are also available for clinicians to confirm a patient has ADHD. Once diagnosed, there are many treatment options proven to be highly effective for ADHD — including cognitive behavioral therapy (CBT), psychiatric medication (for some people), and coaching programs, which teach people with ADHD organizational, planning, and time management tools.

Receiving a diagnosis can be overwhelming, but it can also provide so much clarity and relief to women silently struggling with ADHD.

Mental health professionals have some resources at their disposal to ensure women with ADHD receive proper care, but ultimately clinicians need to listen to — and believe — girls and women when they talk about mental health symptoms they are experiencing. (The American Psychological Association recently updated its Guidelines for Psychological Practice with Girls and Women, which is meant to help mental health providers more effectively treat female patients, to emphasize the importance of validating and their medical concerns.)

Given gender bias in healthcare is well-documented, this is a big step. As HuffPost reported in March 2019, a growing body of research has shown that women are less likely to have their health concerns taken seriously by doctors. However, treating ADHD as early as possible is crucial to overall health in the long run. A study published this past January revealed that untreated ADHD in childhood reduces life expectancy by the time one reaches adulthood. Further, Ari Tuckman, a psychologist and author of More Attention, Less Deficit: Success Strategies for Adults with ADHD, told Healthline in 2015 that adults with untreated ADHD are more likely to struggle in the workplace than their colleagues, earn less money, and get divorced.

Receiving a diagnosis can be overwhelming, but it can also provide so much clarity and relief to women silently struggling with ADHD. Alesia successfully graduated from both college and graduate school, but she says “it wouldn't have been quite so painful if I had understood why I never paid attention.” For Whitney, if the psychologist wouldn’t have dismissed her symptoms as a young child, she believes she would have been able to learn management skills earlier in life that would have helped her throughout school, and beyond. While both these women have successfully found ways to manage their ADHD in adulthood, there are many more women who remain undiagnosed, and untreated because many stereotypes around what ADHD is "supposed" to look like still persist.

Though ADHD is thought to be less common in women, it is no less serious. Women with ADHD face the same challenges as men, they need the same support, and they deserve the same quality of care. The sooner women with ADHD can receive the correct diagnosis — and the appropriate treatment for their mental illness — the sooner they begin to manage it.