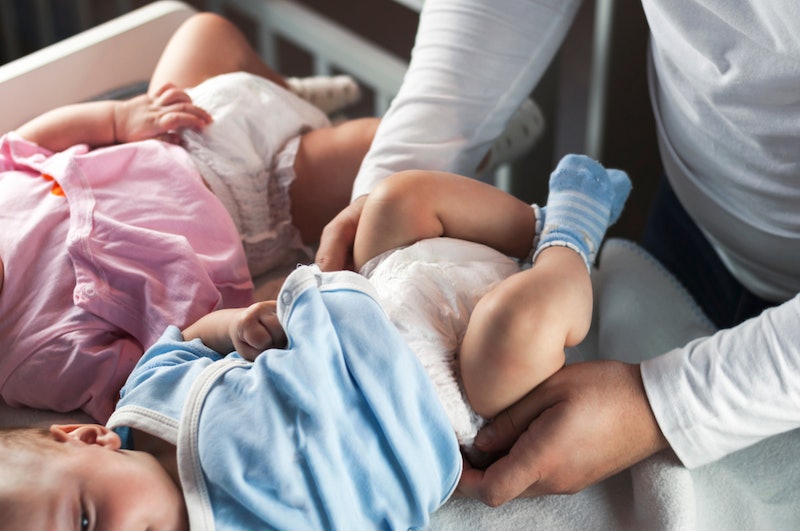 A lot of our life outcomes might be determined from birth — more than we'd ever realized. A new study on fraternal twins suggests that women with fraternal twin brothers might be more likely to make less money or not graduate high school, and it all depends on who they shared a uterus with.

Fraternal twins occur when two fetuses from two separate fertilized eggs share one uterus. They're distinct from identical twins, where twins, always of the same sex, share the uterus and have identical genetic material. It turns out that for fraternal twins of different sexes, sharing a uterus might mean that girls lose out long-term.

The new study was published in the Proceedings of the National Academy of Sciences, and focused on 13,800 twins, or every twin birth in Norway between 1967 and 1978. That included both identical and fraternal pairs. When the researchers tracked the twins through their lives, they found a distinct pattern. If a girl had shared a uterus with a brother co-twin, they had a higher likelihood of losing out on a host of different experiences, like having kids, going to college, and earning well over their lifetimes.

"Females exposed in utero to a male co-twin have a decreased probability of graduating from high school (15.2 percent), completing college (3.9 percent), and being married (11.7 percent), and have lower fertility (5.8 percent) and life-cycle earnings (8.6 percent)," compared to women who shared a uterus with a female twin, the scientists wrote. The study didn't look at women who weren't twins, so we don't know how fraternal twins fare compared to them.

The scientists behind the study think these outcomes have something to do with testosterone exposure in the uterus in fraternal twins. "Typically, about [eight to nine weeks] into gestation, a male fetus begins to produce massive amounts of testosterone," Michael Price, writing for Science, explained in response to the findings. "In male-female twins, though, small amounts of the male fetus’s testosterone can seep into the female twin’s separate amniotic sac." That testosterone exposure, according to the scientists, might explain why women with twin brothers could see long-term differences in how their lives turn out.

The study authors offered further proof of this through another bit of analysis: They looked at the 583 Norwegian women in the study whose male twins died before the age of one, and the 239 women whose male twins passed away in the first month after birth. If the effects of their study had to do with being raised with a male sibling, not sharing a uterus with one, these women shouldn't have shown any change — but their outcomes were exactly the same as women who had grown up with twin brothers. Men, meanwhile, showed no effects from having a female or male twins.

The researchers think that female fraternal twins are caught in a unique double bind. "Women exposed to testosterone have some of the educational challenges more frequently associated with men,” lead study author and economist David Figlio told The New York Times. “However, to the extent to which labor market discrimination exists in society, they don’t have the discriminatory benefits that men enjoy.”

If you're a fraternal twin, though, you should know that the study only looked at Norwegian people in a very specific cultural context, and the percentages in the study weren't huge. Fraternal female twins are only less likely to experience these things, not completely blocked from them. We also don't know precisely what happens in the uterus to create these outcomes.

Fraternal twins are becoming more common in Western countries; between 1980 and 2011, the U.S. saw a 76 percent spike in fraternal births, in part because using in vitro fertilization (IVF) carries a higher likelihood of having twins. It's not clear what happens to fraternal twins in the uterus to create these outcomes. It could be testosterone, or some other process we don't yet understand. If you have a fraternal twin brother, they may have affected your life since before birth — though it's too soon to say exactly how that might be.

More like this
Help! My Boyfriend Won't Tell Me Why He Stopped Going Down On Me
By Sophia Benoit
10 Ways To Be More Empathetic To Your Partner
By Raven Ishak and Lexi Inks
The Differences Between Kinks & Fetishes, Explained
By Lexi Inks
8 Signs Your In-Laws Might Be Toxic
By Kat Kuehl
Get Even More From Bustle — Sign Up For The Newsletter