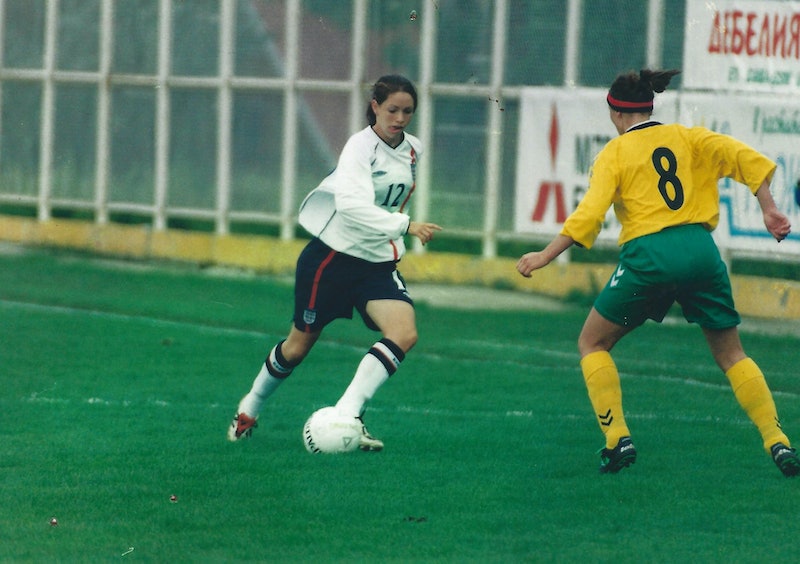 Football is a part of who I am. No sooner could I walk than I was kicking a ball. With three football-mad older brothers, the majority of my early memories are of the four of us having a kickabout in the sleepy little cul-de-sac where we grew up, much to the annoyance of our neighbours. When I was old enough, I joined my primary school team. This was back when it was still rare for girls to play and, at matches, I would hear the opposition laughing and making snide comments about me. So winning became something that was twice as satisfying; not only was I beating the other team, but I was proving them wrong — girls can play football.

Spurred on by the sexist attitudes I encountered in my early years, I got pretty good. By the time I was in my mid-teens, I was playing in what was then the top division, the Women’s Premier League (WPL). And, as time went on, I came to realise that, in the team I played for, there were a number of lesbians, and even a couple of couples, which was all very new to me. I grew up in the late nineties/early noughties and I didn’t know any gay people. It’s almost hard to believe now, but at the time that wasn’t particularly unusual. Compared to today, many more gay people were still ‘in the closet’ for fear of prejudice (or worse), especially in small towns like the one where I lived.

My teammates became women I looked up to; they were funny, confident, good at football... and they just happened to be gay.

As a teenager who was starting to question her own sexuality (triggered by what I have now come to realise was an unhealthy obsession with Rachel Weisz in The Mummy), being in an environment where gay women were largely able to be themselves on the pitch, regardless of who they had to be off of it, was formative. My teammates became women I looked up to; they were funny, confident, good at football... and they just happened to be gay.

While there have been dramatic societal shifts since my time in the WPL, homosexuality remains a controversial subject in football. Well, in men’s football. Despite high-profile inclusion campaigns, there isn’t a single professional footballer in the UK’s top men’s divisions who openly identifies as gay or bisexual. But in women’s football it’s a different story. The team I played for in the WPL wasn’t an anomaly, and in recent years, as the women’s game has grown in stature and garnered media attention, top players have been open about their sexuality. Most notably, Casey Stoney came out publicly in 2014 while she was captain of England, saying “I’ve never hidden it within football circles because it is accepted.” She’s currently the manager at Manchester United WFC.

There isn’t a single professional footballer in the UK’s top men’s divisions who openly identifies as gay or bisexual.

As a teenager, I had been confused by my own burgeoning feelings, and certainly not able to articulate them. But with hindsight, I can appreciate that my experiences of being part of that team laid the foundations for me to accept my own sexuality, and I eventually came out in my early twenties. By that time, I was no longer playing football. I had decided to stop shortly before university, predominantly because of the pressure I felt playing at an elite level, but also because I wanted time and energy to pursue my growing passion for filmmaking. It was the most difficult decision I’ve ever made — more difficult than coming out! — and almost a decade passed before I felt ready to lace up my boots again.

My return to the game was chiefly motivated by a desire to reconnect with the feelings of enjoyment and belonging I’d experienced through football growing up. By that time I was in my late twenties, and realised that I’d never felt that unique sense of belonging in any other aspect of my life. I didn’t want to play in an ultra-competitive environment again, so opted for a five-aside league. The match-day emotions (a cocktail of excitement and nerves) that were so familiar from my younger years soon came flooding back. It was a competitive league, but the games were played in a good spirit and — to my relief — no one took it too seriously. Just like when I’d played as a teenager, there were both gay and straight women, and an inclusive atmosphere across the league. I felt like I was back where I belonged.

Being part of that team laid the foundations for me to accept my own sexuality.

Even now, not all the lesbians that play in that five-aside league are able to be ‘out’ the rest of the week. But on a Sunday afternoon, kicking a ball about with friends, they can be. I’m proud that women’s football — at every level — is an arena in which women are able to be their authentic selves without fear of being excluded. Football is a part of who I am. And I feel lucky not to have to hide any part of who I am, including my sexuality. I hope one day that is true for everyone in the game.