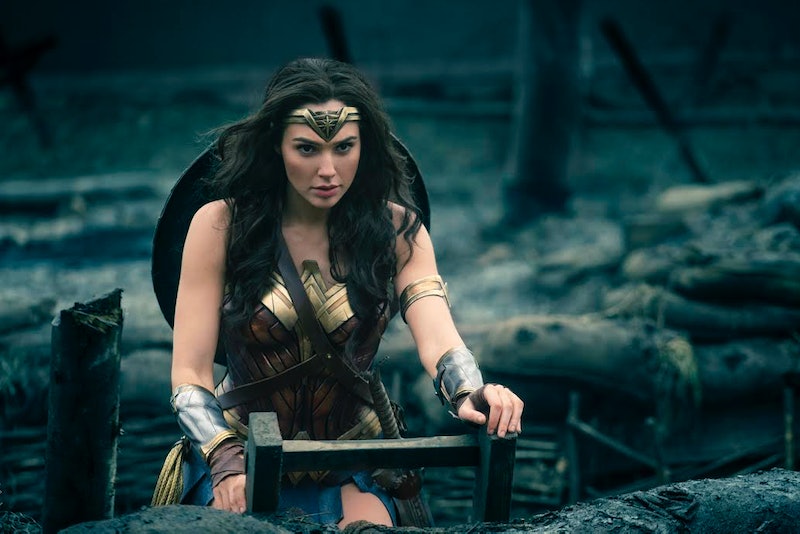 From the moment Gal Gadot walks onto the London set of Wonder Woman, it's clear she's the right woman for the part. Not only is she as tall, athletic, and striking as the comic book character is on the page, but she's tough — really tough. The scene she's filming today requires her to be running through a forest while deflecting bullets with her metal bracelets. That requires a bit of CGI, so she's spending several hours, practically nonstop, sprinting on a treadmill while thrusting her fists in the air. Her stamina is impressive as hell, but perhaps not surprising. When speaking to reporters on a rare treadmill break, Gadot shows herself to be as inspiring as the superhero who, she tells us, she wishes she had as a role model growing up.

Now, though, she's grateful that her daughter, 5-year-old Alma, has Wonder Woman to look up to and emulate. Recently, Gadot recalls, she was reading Alma a bedtime story featuring The Little Mermaid and asked her daughter to describe the characters. Alma noted the princes as being "very strong" — but the princesses? Not so much. Yet when Gadot pushed, her daughter acknowledged that the women of her stories should be as powerful as the men — and that, the actor says, makes the need for a movie like Wonder Woman all the more clear.

"I feel very proud that, finally, this movie is being made, because... boys always had a figure to look up to, whether it’s Superman or Batman or Spider-Man," Gadot says. "They always had heroes to look up to, and for girls, it’s always the princesses are being saved or being passive."

But not Wonder Woman. "She’s fearless, she’s proactive, she believes in herself," Gadot says of her character. "She believes she can do everything, and that’s a true woman for me."

In the movie, out Jun. 2, Gadot's Diana Prince leaves her home of Themyscira to help stop World War I after an American pilot, Steve Trevor (Chris Pine), fills her in on the events. Unlike the hero seen in last year's Batman v Superman, this Wonder Woman is more naive and less experienced, still very much in the process of discovering the extent of her full powers. For Gadot, the character is her "dream role," a woman who is both physically and emotionally strong.

"Somehow I think that I always wished to play Wonder Woman, without even knowing it myself," she says. "Eight years ago, when I just became an actress, I used to travel to Los Angeles and take general meetings with different producers, writers, directors, and they kept on asking me the same question over and over again: 'What's your dream role?' And I kept on saying, 'I’m open to all genres as long as the story is interesting enough, but if you’re really asking what would I like to do, it's to show the stronger side of women,' because I feel that there’s not enough stories being told about strong women, and independent women."

"And little did I know," she concludes with a grin, "that five years later, I’d land the part."

Although the physicality of the role is "challenging," Gadot admits (and those treadmill hours certainly back up this up), she seemingly couldn't be happier to be playing such an iconic character. "I really, really love Diana. I love everything about her," the actor says. "I love the story. She has a heart of a human being, powers of goddess and a very wise brain. She’s everything."

Gadot and her peers may not have gotten to have a big-screen version of the character as their role model growing up, but for a new generation of little girls, this complex, powerful hero will be a major force in all of their lives.

More like this
Gabby & Rachel Reveal How That 'Bachelorette' Rose Ceremony Twist Happened
By Grace Wehniainen
Christina Perri Had No Idea Her 'Twilight' Song Is On YouTube's Top 100 Chart
By Radhika Menon
At 14, D'Arcy Carden Was Sneaking Out To Parties & Crying Over Kurt Cobain
By Ivana Rihter
In Rap Sh!t, Social Media Has Main Character Energy
By Aramide Tinubu
Get Even More From Bustle — Sign Up For The Newsletter