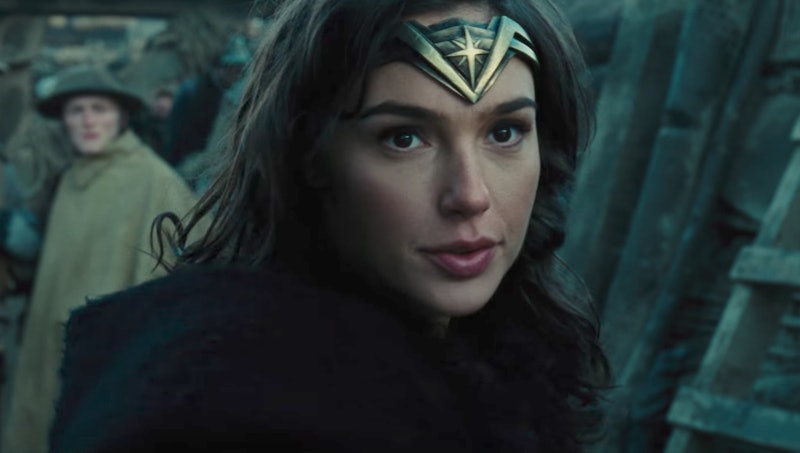 Wonder Woman is breaking a lot of superhero barriers. With a female director at the helm and a woman as the lead character, the film has already cemented its spot in Hollywood history. But there's one other way in which it is changing the narrative: sex. Wonder Woman is a sex-positive hero, the likes of which we've never seen before in comic book-centric movies. She's comfortable with sex and her sexuality, and, as the film makes very clear in one scene, doesn't feel that she has to rely on men for pleasure, either.

When we first meet her in the movie, Diana Prince is an Amazon Princess who has never seen a man in her life. Her lack of interaction with men has allowed for her sexuality to develop without the presence of the male gaze. In fact, she asserts her sexual identity early on when she mentions to Steve Trevor, the first man she interacts with, that she has read theories that men are not necessary for female pleasure. He's taken aback when she says this, but Diana is unfazed, as to her, it's just a simple truth of life.

Diana isn't shackled to male-dominated ideas of sex and sexuality, and it's a refreshing change of pace from most superhero movies, especially considering how different Diana was when she made her big screen debut in Batman v Superman: Dawn of Justice. In that movie, Diana used her sex appeal to her advantage when interacting with characters like Bruce Wayne. But in Wonder Woman, she doesn't really know how to use her womanly wiles to manipulate men, which means two things: that the first modern female superhero star doesn't depend on her sex appeal to save the world, and that her sexual curiosity is all her own.

When she first meets Steve, for example, and walks in on him bathing, her fascination with his body is unashamed. She isn't embarrassed due to patriarchal notions of female modesty. Meanwhile, Steve, who has grown up in a culture that celebrates the sexual prowess of men, assumes that Diana shouldn't see him naked. He covers himself up when she walks in and later insists that he is an above "average" male specimen.

There is a unique power to Wonder Woman's sexuality in the film, because it isn't impacted by male desires. She is completely in charge of her own sexual journey, one that culminates in the film with her (spoiler alert) spending the night with Steve. Diana's curiosity, coupled with her initiative, signals a turning point in the portrayal of on-screen female superheroes, who tend to be defined by their sex appeal in relation to men. Instead of seeing a woman seduce a man on screen to get something from him and further the plot (like Black Widow in Iron Man 2), viewers seeing Wonder Woman will watch as a superhero explores her sexuality without shame. And that is pretty wonderful.