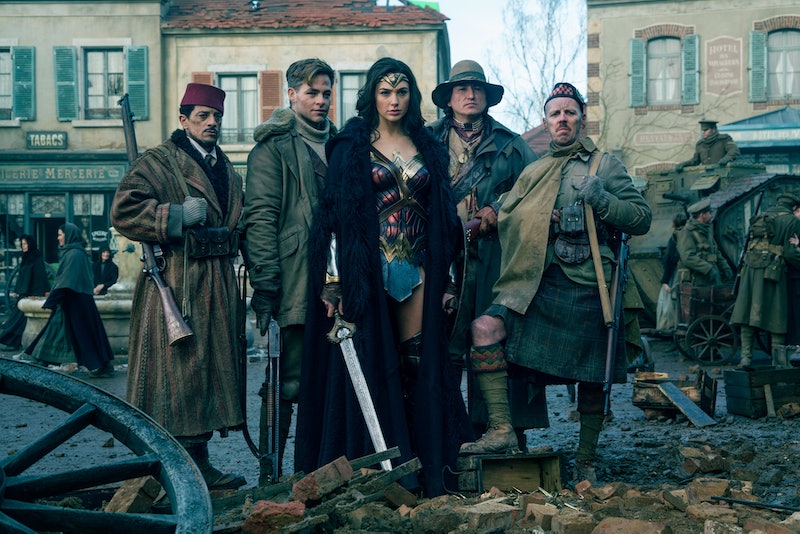 In the riveting opening battle of Wonder Woman, Steve Trevor, played by the charming Chris Pine, looks up at the horde of female Amazonian warriors standing on a cliff, ready to battle the German soldiers attacking them on the beach below. He senses that the women are fierce, capable warriors, but he also knows that the soldiers will have guns — and the Amazons' arrows and swords can't measure up. Yet as the outcome of the fight proves, it's not weapons that make a person or team strong — and, as Wonder Woman states, realizing you don't need them might be the more powerful move of all.

That understanding doesn't come easy, though. In the movie's big fight, the soldiers' guns prove to be a new kind of weapon that the Amazons have never before seen. And while the ladies do manage to win the battle on the beach, their victory doesn't come without casualties, and the deaths are emphasized by the method in which they take place. As Diana (Gal Gadot) watches the battle in awe, a bullet flies by her face in epic, slow motion and digs its way into the gut of an Amazon warrior, shocking our hero. What is this thing that has suddenly taken a life from so far away? Then, Diana's mentor Antiope, a warrior so powerful she flies off of a horse and drives three arrows into their enemies in one move, is grounded by a single bullet to the heart. The Amazons have seen guns in action, and they're horrified by what they can do.

In the ancient methods of battle in which the Amazons have trained, the men normally wouldn't have stood a chance against these women, who are trained in close, hand to hand fighting and sword battle. It's their guns that give them strength, but without them, these men would have been walloped by these women. And Wonder Woman makes this very, very clear. The movie criticizes all weapons of modern warfare, especially those, like guns, to be considered by many to be "manly" or "strong," both in today's society and back in the time of the film's setting.

Guns may be prevelant in warfare today, but history tells us that World War I, during which Wonder Woman is set, was a game changer in terms of faceless battles. Soldiers hid in trenches and weapons were launched across empty fields. Machine guns, mustard gas, and bombs made killing enemies not only easier, but allowed it to be done faster, and without ever seeing who you're going up against. Not facing her enemy head on is the biggest thing that Diana questions and criticizes when she first visits the trenches. So she opts to head out across No Man's Land on her own, taking action into her own hands and engaging in the type of battle that she's more used to.

Wonder Woman's origin in the DC comics was set during World War II, but the change to WWI here does more than just separate the movie from being too similar to films like Captain America: The First Avenger. By setting Diana's story during a time in which even humanity was shocked by its own ability to create devastating weapons and kill each other en masse, the movie highlight its hero's personal discomfort. The evils of mankind are manifest in weapons that can take numerous lives in seconds, causing death to enemies that those fighting will never see. It's a style of war that Diana and the Amazons aren't used to, and one that Diana isn't sure is worthy of her power. In her culture, you face your enemy head on, not from across a mass field, and you certainly don't level an entire village with poisonous gas.

The message here is that while the ownership and usage of weapons may, in our modern society, be seen as a symbol of strength, it is actually, often, a weak move. Owning a gun might make one feel "strong" and "in control," but this isn't necessarily true, as Diana and the Amazons know. Just take what happens with the character of Charlie, the Scottish sniper; brought aboard for his renowned shooting ability, he can't pull the trigger in the end, leaving his skill useless. And Diana, who put her faith in a weapon as well (the God Killer sword), discovers that relying on a physical weapon won't always guarantee victory, either. True power doesn't lie in guns or swords, but in the strength of brave fighters.