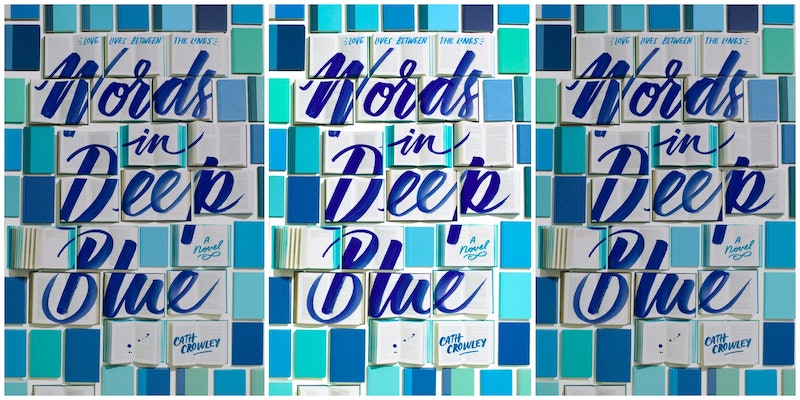 If you enjoyed Graffiti Moon and A Little Wanting Song, you're going to love this news. Cath Crowley's new novel, Words in Deep Blue, is the story of a bookshop romance between two former besties. It's out this summer from Knopf Books for Young Readers, but Bustle has got an excerpt for you to enjoy below.

Before she and her family moved away, Rachel tried to tell Henry how she felt about him. Henry spent Rachel's last night in town with someone else, and nothing ever came of their potential romance.

Now Rachel's moving back to the Melbourne suburbs, and everything is different. Her brother has drowned, she's failed her last year of secondary school, and she wants nothing to do with the sea she once loved, the sea that took her brother away. She'll be working in a hospital café, and Henry, ever the book-lover, helps to run the local bookstore, where he invites patrons to leave notes and letters in the pages of their favorite titles — letters like the one Rachel left him all those years ago.

Cath Crowley's new novel, Words in Deep Blue, is sure to delight any fan of Jandy Nelson, Jennifer Niven, or John Green. Read an excerpt from the novel below, and share your thoughts with me on Twitter! Words in Deep Blue comes out on June 6 from Knopf Books for Young Readers.

I’m leaving this letter on the same page as “The Love Song of J. Alfred Prufrock” because you love the poem, and I love you. I know you’re out with Amy, but fuck it — she doesn’t love you, Henry. She loves herself, quite a bit, in fact. And I love you. I love that you read. I love that you love secondhand books. I love pretty much every­ thing about you, and I’ve known you for ten years, so that’s saying something. I leave tomorrow. Please call me when you get this, no matter how late.

I open my eyes at midnight to the sound of the ocean and my brother’s breathing. It’s been ten months since Cal drowned, but the dreams still escape.

I’m confident in the dreams, liquid with the sea. I’m breathing underwater, eyes open and unstung by salt. I see fish, a school of silver-bellied moons thrumming beneath me. Cal appears, ready to identify, but these aren’t fish we know. “Mackerel,” he says, his words escaping in bubbles that I can hear. But the fish aren’t mackerel. Not bream, not any of the names we offer. They’re pure silver. “An unidentified species,” we say as we watch them fold and unfold around us. The water has the texture of sadness: salt and heat and memory.

Cal is in the room when I wake. He’s milky-skinned in the darkness, dripping of ocean. Impossible, but so real I smell salt and apple gum. So real I see the scar on his right foot—a long-healed cut from glass on the beach. He’s talking about the dream fish: pure silver, unidentified, and gone.

The room is dark except for the moonlight. I feel through the air for the dream, but instead I touch the ears of Cal’s Labrador, Woof. He follows me everywhere since the funeral, a long line of black I can’t shake.

Usually, he sleeps on the end of my bed or in the doorway of my room, but for the last two nights he’s slept in front of my packed suitcases. I can’t take him with me. “You’re an ocean dog.” I run my finger along his nose. “You’d go mad in the city.”

There’s no sleeping after dreams of Cal, so I pull on clothes and climb out the window. The moon is three-quarters empty. The air is as hot as day. I mowed late yesterday, so I collect warm blades of grass on the soles of my feet as I move.

Woof and I get to the beach quickly. There’s almost nothing between our house and the water. There’s the road, a small stretch of scrub, and then dunes. The night is all tangle and smell. Salt and tree; smoke from a fire far up the beach. It’s all memory, too. Summer swimming and night walks, hunts for fig shells and blennies and starfish.

Farther, toward the lighthouse, there’s the spot where the beaked whale washed ashore: a giant at six meters, the right side of its face pressed against sand, its one visible eye open. There was a crowd of people around it later — scientists and locals studying and staring. But first there was Mum and Cal and me in the early cold. I was nine years old, and with its long beak it looked to me like it was half sea creature, half bird. I wanted to study the deep water it had come from, the things it might have seen. Cal and I spent the day looking through Mum’s books and on the internet.

The beaked whale is considered one of the least understood creatures of the sea, I copied into my journal. They live at depths so deep that the pressure could kill.

I don’t believe in ghosts or past lives or time travel or any of the strange things that Cal liked to read about. But every time I stand on the beach, I wish us back — to the day of the whale, to any day before Cal died. With what I know, I’d be ready. I’d save him.

It’s late, but there’ll be people from school out, so I walk farther up to a quiet spot. I dig myself into the dunes, burying my legs past my hips, and stare at the water. It’s shot with moon, silver leaking all over the surface.

I’ve tried and tried to stop thinking about the day Cal drowned, but I can’t. I hear his words. I hear his footsteps through the sand. I see him diving: a long, frail arc that disappears into sea.

I’m not sure how long I’ve been here when I see Mum walking over the dunes, her feet struggling to find traction. She sits on one side of me and lights a cigarette, cupping it from the night.

She started smoking again after Cal died. I found her and Dad hiding behind the church after the funeral. “Don’t say it, Rach,” she said, and I stood between them and held their free hands, wishing Cal had been there to see the strangeness of our parents smoking. Dad’s a doctor; he’s been working with Doctors Without Borders since the divorce ten years ago. Mum’s a science teacher at the high school in Sea Ridge. They’ve called cigarettes “deathsticks” all our lives.

We watch the water without talking for a while. I don’t know how Mum feels about the ocean now. She doesn’t go in anymore, but we meet at the edge every night. She taught Cal and me how to swim, how to cup water, how to push it back and control its flow. She told us not to be afraid. “Don’t ever swim alone, though,” she said, and apart from that one time, we didn’t.

Tomorrow I leave Sea Ridge for Gracetown, a suburb of Melbourne, the city where my aunt Rose lives. I’ve failed Year 12, and since I don’t plan to try again next year, Rose has gotten me a job in the café at St. Albert’s Hospital, where she’s a doctor.

Cal and I grew up in Gracetown. We moved to Sea Ridge three years ago, when I was fifteen. Gran needed help, and we didn’t want her to sell the house or go into a home. We’d stayed with her every holiday, summer and winter, since we were born, so Sea Ridge was like our second home.

Maybe it’s not, but before Cal died, I had my life planned. I got A’s, I was happy. I sat on this exact spot last year and told Cal I wanted to be an ichthyologist, studying fish like the Chimaera, which evolved 400 million years ago. We both tried to imagine a world that went that far back.

“I feel like the universe cheated Cal and cheated us along with him,” I say now.

Before Cal died, Mum would have explained calmly and logically that the universe was all existing matter and space — 10 billion light-years in diameter, consisting of galaxies and the solar system, stars, and the planets. All of which simply do not have the capacity to cheat a person of anything.

Tonight she lights another cigarette. “It did,” she says, and blows smoke at the stars.