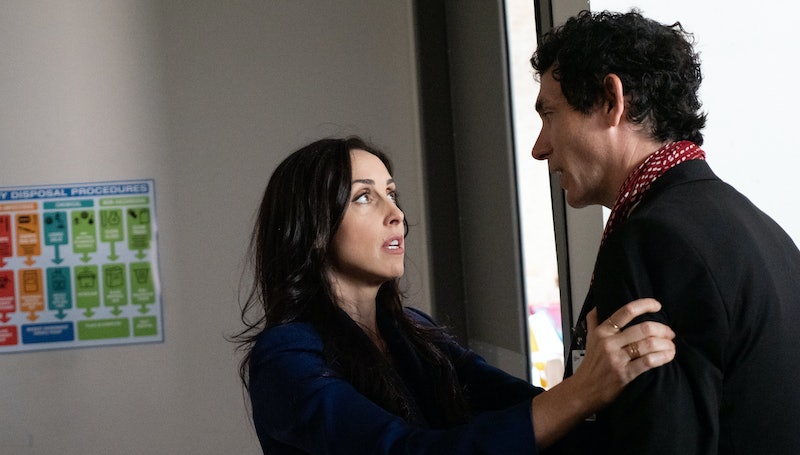 The working moms are back to working, because Workin' Moms has been renewed for Season 5. Though the fourth season hits Netflix on May 6, it's already been out for a while in Canada. The show originally airs on the Canadian channel CBC, where Season 4 played from February to April 2020. Shortly after its finale, creator and star Catherine Reitman announced the renewal news on a Canadian talk show.

Reitman said that she's been running the writers room remotely out of her home since April. "It's been kinda cool, all the writers get on Zoom ... and we talk out big ideas and we've been actually reviewing drafts," she said.

Season 4 of the show began taping in July 2019, which is potentially still a feasible timeline for Season 5, depending on how the coronavirus pandemic restrictions are loosened or tightened before then. There may need to be a slight delay in filming, which could potentially push the premiere date a bit. Usually new seasons air first in Canada around January or February, so if everything goes according to plan, fans could see an early 2021 premiere date for Season 5. Then, Netflix usually gets the new season anywhere from three to seven months later, so American fans may be able to watch Season 5 around summer 2021.

There's another potential snag in that scenario, though, which is that CBC has been re-evaluating its Netflix partnership. "A number of countries have done deals, as we did, with Netflix," CBC Television president and CEO Catherine Tait said in October 2019 according to Digital Spy, "and over time we start to see that we're feeding the growth of Netflix, or we're feeding the growth of Amazon, rather than feeding our own domestic business and industry." She added, "We're not going to do deals that hurt the long-term viability of our domestic industry."

However, since that conversation took place last October and Workin' Moms Season 4 is still hitting Netflix this May, perhaps that show partnership is still solid and CBC will continue to let Netflix air the episodes later on.

Usually Workin' Moms seasons are 13 episodes long, but Season 4 was only eight. It's unclear if Season 5 will also be shorter, but having less to marathon on Netflix is going to make the wait feel even longer. At least when viewers stream the final episode, they can feel good knowing that not only is Season 5 a go, but the writers are already working on scripts. That way, when production can safely resume, they can all hit the ground running and get new episodes out ASAP.

More like this
Does 'Locke & Key’s Ending Mean There Could Be A Season 4?
By Sophia Moore
‘Squid Game’ Creator Hwang Dong-Hyuk Just Dropped A Major Season 2 Tease
By Brian Anthony Hernandez and Bustle Editors
Everything To Know About Netflix’s 'Never Have I Ever' Season 4
By Jack Irvin and Gabrielle Bondi
'Stranger Things' Season 5 Will Echo Season 1 In A Key Way, The Duffer Brothers Confirm
By Kadin Burnett and Sophie McEvoy
Get Even More From Bustle — Sign Up For The Newsletter