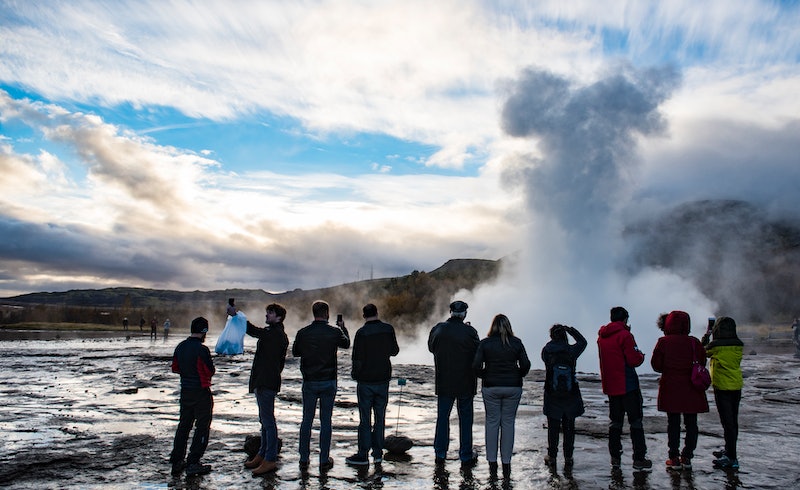 If you haven't been the magical fairytale land that has almost 24 hours of daylight during the summer, now is your chance: WOW air is having a serious sale for flights to Iceland — we're talking $69 from major U.S. cities to Reykjavik. Travel Pirates reported that some flights are as low as $69 each way, and most are below $99. This means you can get to Iceland for far less than a ticket to a major city in the U.S. The deal is good as gold if you plan to travel in May or June, or in September and October.

Are you packing your bags yet? Before you hurry to the airport for your Icelandic adventure, there's a few things to know. Your full-size carryon will cost an additional $39, while a checked bag costs $49 and up depending on how much it weighs. You'll also want to make sure you bring books or your tablet because there is no free in-flight entertainment on WOW, though you can rent an iPad. Additionally, make sure you board the plane with your own water and snacks because these necessities will also cost you extra.

What's more, while it's cheap to get to Iceland, it's expensive once you arrive if you don't do your research ahead of time. I suggest buying your wine, liquor, and plenty of snacks at the duty-free airport shop once you land. That being said, the opportunity to frolic in the geothermal energy center of the world is pretty boss, and you can spend all of your time lounging in hot springs and hiking around beautiful glaciers. Just don't forget to bring a sleeping mask because the sun literally never sets during the summer in Iceland. Hotels can also be a bit steep, but this is a country where it's totally cool to stay at a hostel.

If you're bringing your squad, pool your money and rent a car instead of taking pricey guided tours to some of the natural wonders, like the ever-erupting geysers. Also, avoid expensive bottled water — bring your own water bottle and fill it up with tap water, which is totally safe to drink (and more eco-friendly, to boot). You also might be tempted to stop at the famous Blue Lagoon when you're going to or from the airport, but it will cost you. However, fear not because you can save big bucks by opting for some of the less touristy lagoons and hot springs.

The website Intrepid Travel suggests cashing in on as many free activities as you can, which is where that rental car comes in handy. "Arguably one of the best experiences for traveling Iceland on a budget is hunting down the incredible waterfalls across the country," Julie Faye Germansky wrote. "Contrary to the popular song lyrics 'don’t go chasing waterfalls,' we don’t take the advice literally and recommend quite the opposite. One of many natural beauties is Seljalandsfoss waterfall, where you can walk behind the thundering falls and witness a misty rainbow."

What's more, while a lot of places claim to have temperamental weather, in Iceland the saying "if you don't like the weather, wait five minutes" is actually true. Make sure you pack for all types of weather, even in the summer. While I went to Iceland in April, a 15 minute time span brought whipping wind, snow, rain, and blazing sun. It was totally bananas, but it makes sense if you remember that Iceland is a frozen rock in the middle of the North Atlantic Ocean. If you're already planning to book a trip to Europe this summer, then you can take advantage of WOW's stopover special, which allows you to treat a few days in Iceland as a layover. So, as they say in Iceland, Áfram með smjörið. Translation, on with the butter, which means move your butt, aka book your flight right freakin' now.