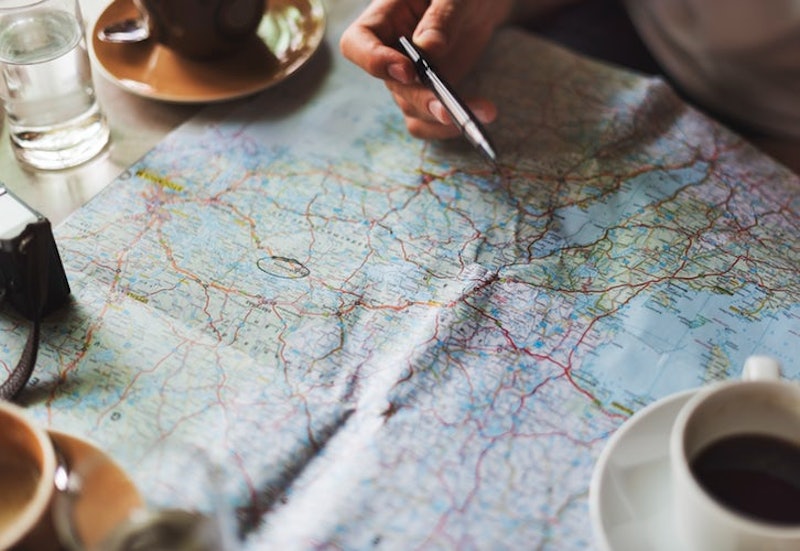 That toaster oven you've been eyeing isn't the only deal you're going to get this week. For Black Friday, WOW Air is offering flights to Europe for $99 — which, if you've never flown to Europe, is a major bargain. And before you start getting suspicious, let me be clear: you get an actual seat on the plane. And not the toilet seat. For just $99. Bargain! As you might've guessed, though, there are a few conditions.

For starters, these are one-way tickets, and there are only 1,500 spots available, which means that if you want a shot at getting one, you're going to have to be one of those crazy people who sits by the computer waiting for the sale to drop and doesn't even walk away from the screen to go pee. Secondly, of those 1,500, only 1,250 of them are available for $99.99 from Boston, Chicago, and Pittsburgh to Reykjavik, Iceland; Amsterdam, Netherlands; London, England; and Dublin, Ireland. The remaining 250 seats are available for $129.99 from Los Angeles, San Francisco, and Miami to the same destinations as the previous seats. You must additionally book a return flight in order to grab one of these deals; so if you planned on fleeing the country on a budget, now's not the time. You have to come back. Sorry.

These flights run from December of this year through May of 2018.

Even though the $99.99 only covers one way, rest assured you're getting a hot deal regardless. According to Travel Insurance Review, the average round-trip ticket to Europe ranges from $1,000 to $1,500 during the most expensive season; at the cheapest, they'll still set you back around $500, at best. Either way, WOW Air is handing out flights at a fraction of the typical cost. That sounds like the best holiday present ever.

And the destinations they offer are nothing to scoff at either; in fact, you can even visit these cities on a budget, to go with your oh-so-affordable airfare. For instance, in an article earlier this year, Thrillist Travel named Dublin one of the top cities in Europe to visit for cheap. Hotel prices are reasonable, along with private hostels; you could easily find accommodations for between $40 and $80 a night. If you plan on doing a lot of sightseeing, purchase the Dublin Pass, which gives you admittance into every attraction but Trinity College for a better daily flat rate.

Dublin's not the only promising destination on WOW's list. You could go with pretty much any of those locations, and be perfectly happy with your choice.

CNN Travel voted the Netherlands the sixth happiest country in the world, and Iceland the third happiest country. Amsterdam is a tourist hotspot, packed with art, culture, and history. The capital of Netherlands often tops lists and one of the most livable cities in Europe and even in the whole world, and it's a hub for environmental friendliness and global innovation. Similarly, Reykjavik, Iceland is a top destination, what with its natural hot springs (like the Blue Lagoon), frozen waterfalls, and Bankastræti — the main street in the city center.

And then, we have London. While the city has been named one of the most expensive in the world, believe it or not, you can travel to London for cheap. By swapping out pricey hotels for Airbnb or Hostelworld, and purchasing day or weeks passes for the Tube (as opposed to a one-use pass), you will leave lots of extra cash comfortably sitting in your wallet.

This isn't the first time WOW has offered insane deals. In January, they had one-way tickets to Europe for $69. In June, that had a sale for trans-Atlantic tickets at $55. This Black Friday, be prepared to plan your next big getaway.