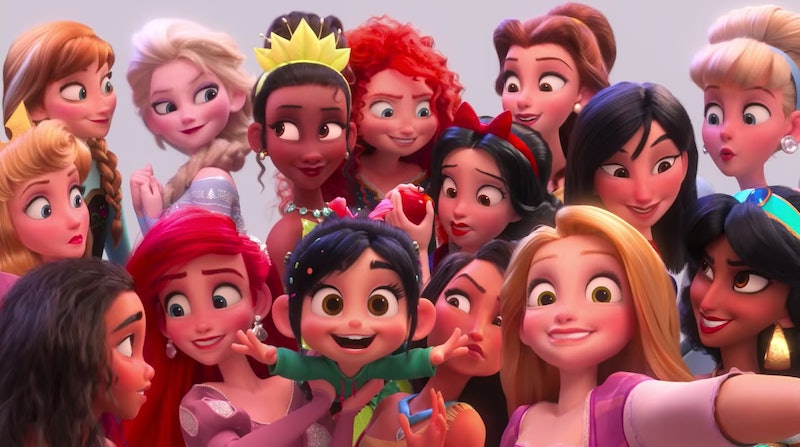 In response to waves of criticism, Wreck-It Ralph 2 has changed Princess Tiana's skin tone and features, re-animating her with darker hair and skin tone, and a wider nose. After fans got their first look at Princess Tiana in Ralph Breaks the Internet: Wreck-It Ralph 2, they immediately took to social media, accusing the studio of attempting to whitewash Tiana's look. These complaints from fans, as well as the advocacy group Color of Change, were heard all the way to Disney, according to The Wall Street Journal, and they actually did something about it. According to the report, the studio went so far as to reanimate portions of the film in which Tiana appears, and released the first images of the redrawn character in a new trailer, to many fans' delight. Obviously in an ideal world, a situation like this one would never arise, but given the circumstances, this is a pretty huge win for representation.

The controversy started this past summer, when Ralph Breaks the Internet: Wreck-It Ralph 2 released its first teasers. The followup to the popular 2012 film portrays modern depictions of a wide range of Disney princesses from Moana, to Snow White, to Mulan, to Rapunzel, but one character in particular stood out. Fans noted that Princess Tiana's appearance had been altered pretty significantly since her debut in 2009's The Princess and the Frog. Namely, critics pointed out that the first — and only — black Disney princess' skin had been lightened, and the bridge of her nose narrowed, choices that left fans both bewildered and frustrated. And they weren't shy about sharing their critiques of the character's alleged whitewashing.

And it's a good thing they spoke up, because all that clamoring paid off. The WSJ reported that Disney's animators set up a meeting between Anika Noni Rose, who voiced Tiana in the original and will do so again in Wreck-It Ralph 2, and Color of Change, the organization that has made a name for itself advocating for diverse representation in Hollywood. And apparently it went well; on Sep. 21, Color of Change tweeted: "Huge win for Black girls who look up to Princess Tiana! After conversations with @Disney & @DisneyAnimation about the character's appearance in #WreckItRalph2, they addressed our concerns and restored Tiana to her original depiction."

In the new images, Tiana's complexion, eyes, and hair appear to have been darkened, while the bridge of her nose has been broadened, and her lips have been redrawn with more fullness. In short, she looks much as she did in the 2009 film, and fans have been expressing their delight and appreciation all across Twitter.

After the debut of the adjusted character, COC released a statement, via USA Today, calling the new alterations to Princess Tiana a "victory" for black audiences:

"Disney’s decision to restore Princess Tiana’s image to that of an unapologetically Black princess with full lips, dark skin and dark hair in Ralph Breaks the Internet: Wreck-It Ralph 2 is a victory for Color Of Change members, Black children and their parents, and Black audiences who want to see the variety of shades, shapes and sizes of Black characters accurately represented in the arts."

Disney did not comment for the WSJ report, but even if it doesn't speak up about the change, this is exactly how seriously concerns of this nature should be treated. As one Twitter user, @JennE_Penny, pointed out above, Disney made this adjustment just months before the film's premiere, which is an incredible demonstration of their commitment to representation. Now, if they could just remove the need for such last-minute scrambling altogether and make sure other studios follow their example, we'll really be getting somewhere.