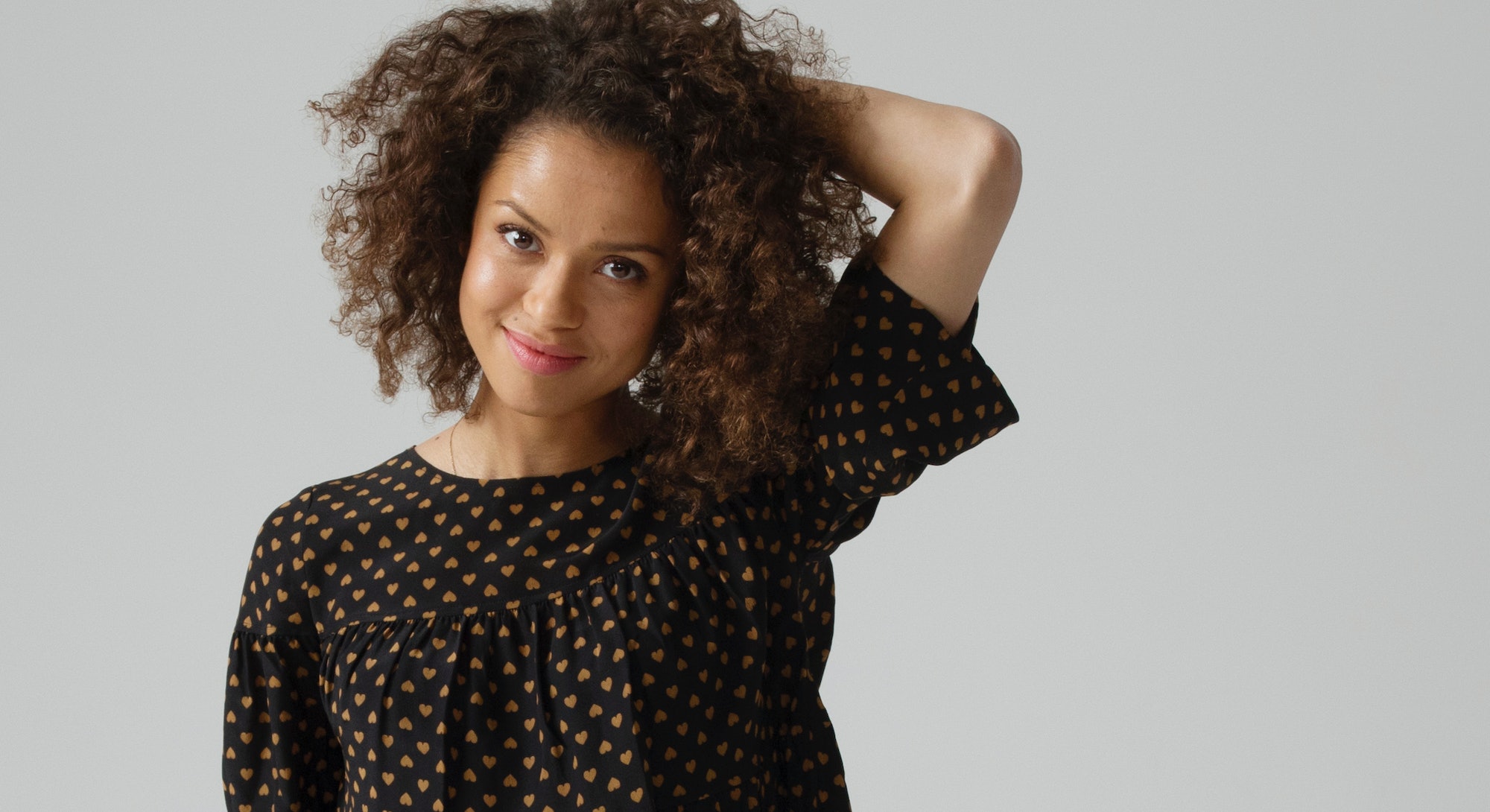 For most people, Friday, Feb. 16 was a relatively normal day, if a slightly busier one than usual. The night before, Black Panther hit theaters to much fanfare, and many of us were gearing up for a sunnier-than-normal winter weekend. But for Wrinkle in Time actor Gugu Mbatha-Raw, Feb. 16 had a special meaning. It was the day she decided that after years of standing back and watching everyone else speak up, she wouldn't — she couldn't — stay quiet any longer.

"With everything that’s going on in the world, I felt galvanized and inspired by Time's Up, and I was starting to question whether I was using my voice as efficiently as I could," she tells me, when we speak shortly after she joined Twitter, Instagram, and Facebook in one fell swoop. "I think as an actress, I’ve always believed maybe an old-fashioned idea that mystique was valuable and all of that stuff in terms of your career and acting," she continues. "But I just couldn’t deny that what was going on in the world, with the women’s movement especially... it’s better to contribute than shy away and stay silent."

As one of Hollywood's most prolific yet enigmatic actors, Mbatha-Raw has spent her career disappearing — into roles, into costumes, seemingly into thin air the moment she's done promoting a project. Despite her near-constant presence on-screen (in the last five weeks alone, she's starred in three new movies), fans know little about who she actually is. What she likes, what she believes, what she wants to share with the world have all been a mystery. As her lack of social media showed, there's long been a thick, impenetrable veil between the actor's performances and her personal life.

And that's been no accident. A clear introvert (despite giddily dancing to disco music that plays in the background of our chat) Mbatha-Raw says she stayed off Instagram and the like out of fear. "I think I was always afraid of social media because I was concerned that it was a narcissistic place and a toxic place," she explains. But recently, with everything happening in the world, she had an epiphany. "I think I just realized that we actually have the power to change that in ourselves," she says now. "You can sort of shy away from these things because they can be toxic, or you can try and put some positivity out there and try to shift that balance. Maybe that’s idealistic, but that’s what I decided."

As a biracial woman, Mbatha-Raw long ago learned that her presence on-screen matters to countless viewers. "It’s wonderful to be a part of something that feels historic," she says of A Wrinkle in Time, which stars a black teen girl and is directed by a black woman, but the same sentiment can be said about many of her projects. For years, the actor's name has been synonymous with movies and shows that start conversations, from Belle (about the titular biracial woman in the 1700s who helped abolish British slavery), to Black Mirror's "San Junipero" episode (the Emmy-winning hour about queer women falling in love in an '80s beach town).

And Mbatha-Raw is well aware of this. "The choices that I’ve made and the types of projects and messaging that they include," she says, all have to do with "positive steps to help our culture evolve." But up until recently, her reticence to share her life with the world felt at odds with her choices on-screen. Her roles made her the center of essential talks on race and gender, yet barring a few interviews, her own thoughts stayed mostly unknown.

But now it's all changing, albeit slowly; in the weeks since Mbatha-Raw joined social media, the most personal thing she's posted has been a thank you to fans for welcoming her to Twitter. "I’m still a private person," she tells me, but, she adds, "it’s nice to have the channel open now." Although she tells me that she's still figuring out how she wants to use her new platforms ("It’s like learning a new language," she says with a self-deprecating laugh), there's a clear theme to her posts: speaking up and sharing news about issues that matter, like Time's Up and #MeToo.

"I'm excited by the conversation and the unity that women are having in the industry and the world at large, and I think it’s important to keep that conversation going," Mbatha-Raw says. Already, she's been inspired by people like Reese Witherspoon, Oprah Winfrey, and Ava DuVernay, her Wrinkle in Time co-stars and director, respectively, for how they've used their own social media. "It’s always focused towards the work and focused on bringing positivity out there, bringing, specifically, women together," the actor says.

Using Instagram and Twitter for good isn't the only way Mbatha-Raw is echoing her peers. At 34, she is on the verge of superstardom, having spent the last few years winning raves for roles as varied as a D.C. lobbyist and an 1800s slave. Sure, she's been on the rise for awhile now, thanks to acclaimed films like Belle and Beyond the Lights, but it's only been since late 2016, with Black Mirror and Beauty and the Beast (she voiced Plumette, the feather duster) that most people took notice.

And now there's A Wrinkle in Time, out March 9, a sure-to-be-blockbuster that is bound to shoot Mbatha-Raw even further into the mainstream consciousness. "The budget of the movie, the fact that Ava [DuVernay] is directing it as a woman of color... I think there’s going to be a whole new audience of people that are discovering the story fresh, and I’m really excited to be part of that," she says with a smile.

In the film, Mbatha-Raw plays Dr. Kate Murry, the scientist mother of preteen Meg (Storm Reid) and wife of the long-lost physicist Alex (Chris Pine). It's a supporting role — the movie is focused on Meg's tumultuous journey to find her father — but for the actor, that just makes it all the better; she gets to help usher in "the next generation," like Reid, Levi Miller (Meg's friend), and Deric McCabe (Meg's little brother), who, Mbatha-Raw says proudly, are "kind of coming up and killing it." One gets the sense that if she had her way, this would be how every movie she was in worked; she'd get to have her moment, show off her skills, and then fade into the background, letting others take the lead and get all the attention.

But alas, that's not how it goes. Mbatha-Raw may only now be getting comfortable with the spotlight, but her work is too good to ignore. It's not just the quality, though few would dispute that the actor is extremely talented. It's the choices she makes, not just with the messaging behind each performance but the people she chooses to work with on-set. As Mbatha-Raw herself puts it, there's a "strong female voice" in so much of what she does, both in her characters and behind-the-camera. From DuVernay to Irreplaceable You's Stephanie Laing to Belle's Amma Asante to several others, female directors have helmed a strikingly high percentage of the actor's projects.

At first, this pattern wasn't on purpose. "Initially, it was just women that were giving me the best roles," Mbatha-Raw explains, referencing Belle and Gina Prince-Bythewood's Beyond the Lights. Later, though, the actor began to explicitly go out of her way to take on projects with female directors. "I feel like we’ve got to support each other and I think that’s how change really happens in the industry," she says. "You have to invest in your women and support each other."

Mbatha-Raw says that she's thinking about eventually making the transition to directing herself, following in the lead of her mentors. "I think sometimes if you’re seeing a gap, or you’re not seeing the kind of work that you want... you do have to tell your own stories." She's not looking to make the switch anytime soon — "work and life is my film school," she says with a laugh — but she's inspired by the women, like DuVernay, who are making films telling stories not typically seen on-screen. Right now, "women are really feeling like they’re awakened and empowered to grab their moment," she explains. "That shift is really happening."

Women are using their voices to speak up — and Mbatha-Raw, now in ways both on screen and off, can proudly count herself among them.