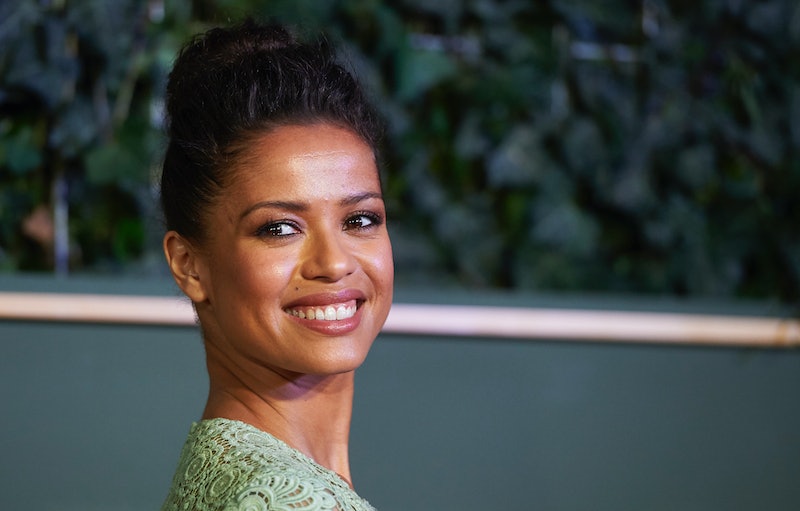 The breakout star of 2014's runaway hits Beyond the Lights and Belle, Gugu Mbatha-Raw certainly fits the bill of an up-and-comer. Yet with her most recent role playing opposite Will Smith in the acclaimed Concussion , the actor proved that she's here to stay — and while in Hollywood, she's going to change the nature of what we see on-screen. Mbatha-Raw is half South African and half white, and as a biracial woman, she fails to fit neatly into Hollywood's pre-determined ethnic and racial roles, a truth she learned quickly when she first starting acting in the U.S.

"When I first came to America, it was a bit of a shock to the system in terms of some of the... labels that I felt were being applied to me that I felt I didn't necessarily identify with myself," Mbatha-Raw, who's British, tells Bustle. She points to her first major American project, a starring role in JJ Abrams' 2010 series Undercovers, as an example; the show was hailed at the time for featuring African-American leads, a rarity on TV, and yet Mbatha-Raw tells Bustle that she never identified herself as "African-American," as neither she nor her co-star Boris Kodjoe were born in America.

And while she's happy as an actor to portray experiences that are not her own, the star says that it is important for her to also be truthful in her work to her experience as a biracial woman. "I think it's great to not have to choose to be black or white, but to be your complex, wonderful self... for me, it's all about being able to be who you are," she says. The importance of viewers being able to see their experiences reflected onscreen isn't lost on Mbatha-Raw, either, and while taking home the Essence Black Women in Hollywood Breakthrough Award in 2015 for her work in Beyond the Lights and Belle, the star used her speech to note the "responsibility" she feels she has to audiences.

That said, the actor won't let her heritage limit her work or keep her from playing a character with a different ethnicity. Instead, she purposefully incorporates her own background into her work. "For me, being biracial of mixed heritage, it's who I am. So, of course, I bring that to every role in some respects," she says.

It's rare to see interracial identities explored in a Hollywood that tends to favor simple labels like Black and White, and the opportunity to play complex, biracial women in both Beyond the Lights and Belle isn't something Mbatha-Raw takes for granted. However, that's not to say she is only set on playing biracial characters, or that she should be. Concussion, now out on DVD/Blu-Ray, is a prime example: in the film, Mbatha-Raw plays Prema, an African immigrant. And in Free State Jones, out June 24, she'll play a freed slave who falls in love with a white man (Matthew McConaughey) at the height of the Civil War; in Beauty and the Beast, set for release on March 17, 2017, she'll play a feather duster, Plumette.

"The whole #OscarsSoWhite controversy really blew the lid off something that's maybe been simmering for a while."

Actors don't have to play out their own lives, and Mbatha-Raw's varied career proves she's not interested in portraying one specific ethnic experience on-screen. However, it seems impossible to be a working actor in Hollywood and not feel somewhat boxed in by ethnicity. Many film scripts are written with physical descriptions of a character in mind, oftentimes including race, and while some producers have made efforts to participate in what is known as "colorblind casting" (a technique famously used in Lost or any number of Shonda Rhimes projects), much of Hollywood appears to abide by the unwritten rule that main characters must be white.

And when white actors are the only ones being celebrated for their work, as seen at this year's Academy Awards, it confirms these long-standing biases. Speaking on the #OscarsSoWhite controversy and Concussion's role in the movement, Mbatha-Raw tells Bustle she's happy to see the beginnings of change in the industry. "I think the whole #OscarsSoWhite controversy really blew the lid off something that's maybe been simmering for a while," she says, noting it as a call for "more opportunities for people of every background, ethnicity and gender."

Having a greater diversity of perspectives in Hollywood is something Mbatha-Raw clearly feels strongly about. It's telling, then, that her two breakout films, Beyond the Lights and Belle, happen to be directed, and written by, women — Gina Prince-Bythewood and Amma Asante, respectively. Though the actor insists she didn't actively seek out female directors on those films, she does find herself attracted to films that offer a female point-of-view over the male gaze traditionally seen in Hollywood. "You can do a wonderful part in a film, but if the point of view is ultimately not from a female's perspective, there's only going to be a limited amount of elements that you can play in that role," she says.

Mbatha-Raw, though, doesn't just talk the talk; it was recently announced that she will be reuniting with Prince-Bythewood on an adaptation of Roxane Gay's highly acclaimed novel An Untamed State . The film, about a Haitian-American woman who is abducted, is sure to bring a whole new facet of non-white womanhood to the big screen, with Mbatha-Raw right at the heart of it.