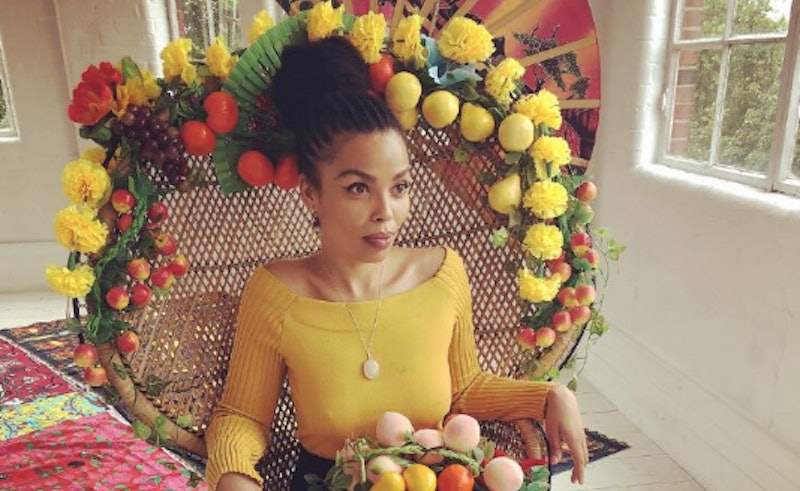 When I sit down with Emma Dabiri in her home in east London, I am fan-girling just a little. I finished her book Don’t Touch My Hair a few weeks before meeting, and I was blown away by the incredible level of detail in her writing, and the breadth of her sources. Emma Dabiri's book is academic but the writing goes far beyond the scope of Western analysis. It’s also pithy, personal and extremely poignant. To be quite frank, black hair history has never looked so good.

“Thank you” Dabiri says as we curl up on her sofa. “I think because of the internet, for all its pluses there's also a real tendency for regurgitating the same material, and I have little interest in just repeating the same things” she says. “I’m a total history nerd but also really enjoy contemporary pop culture. I teach African studies [at London's SOAS] and have access to a wide variety of sources, so it made sense to be able to bring a historical perspective to conversations about things that are topical today, and to be able to introduce material not easily available online.”

Indeed, the discourse around black hair has enjoyed a resurgence in the past few years. We’ve seen an increased visibility of curls, coils, and (some) kinks online with the natural hair movement, and in films like Black Panther. We know more about the ills of cultural appropriation than ever before, and hair discrimination is now illegal in some US states.

But academic and broadcaster Dabiri proves that there’s so much more to comb through. In Don’t Touch My Hair, she gets to the root of how and why, black hair been stigmatised, politicised and misunderstood for hundreds of years, taking us on an incredible journey which covers Latin America, pre-colonial Africa, and hair entrepreneurship in the States, which is interspersed with Dabiri’s own reflections from her upbringing. She talks of being influenced by radical book shops in Dublin, and by her father’s thinking. “I think I was about seven or eight when he gave me a young person's guide to communist Cuba.” she says. “I was just like, what the hell is that? But those ideas were introduced to me quite early” she laughs.

Born to a white Irish mother and Nigerian father, Dabiri grew up in '90s Dublin, with spells in Atlanta during her teens and early childhood. Being mixed-race, she was something of an anomaly in both spaces and walked a racial tightrope between fascination and fetishisation. In her book she describes how a nun pulled back her lips as a child, (“‘‘your people have such beautiful teeth!’”), and of white boyfriends who tried, and failed, to run their fingers through her tightly coiled hair (“black men usually knew better”). Today she speaks with the self-assured confidence of a woman who knows herself, but as a child she was acutely aware of not fitting the narrow, cookie-cutter ideal of a mixed-race woman. Black people expressed disappointment that she did not sport the ringlets often synonymous with those of a similar “yellow-bone” skin tone. White people told her she was “pretty for a black girl.”

Like many of mixed-heritage, I can really relate to the existential experience of dealing with multiple projections of yourself from those around you. Although I grew up in the UK, I also have a white Irish mother and have occupied white spaces most of my life. I ask Dabiri how she dealt with being the only mixed-race girl in her communities in Atlanta and Dublin. “In Ireland I was very much under scrutiny. I was somebody that people really stared at, like open-mouthed” she says. “I wasn’t considered pretty as a child and I felt very self-conscious.” She explains when a black friend’s mother first braided her hair at 14, that was the first time her hair looked good. “Suddenly boys very much had an interest in me. But it was underscored by this fascination with being with a black girl, this perception that black girls were easy, or that it was going to be some sort of experience.”

In the book Dabiri writes eloquently about the determining factors of blackness around the world, and argues that hair “texturism” is part of the same anti-blackness as colourism. “I thought when I got to America it would be very apparent that I have white European ancestry and I’d get loads of shit” she laughs again. “But that's where I was first properly introduced to colourism and it was very, very shocking to me.”

She went on to explain her confusion when she was lauded for her complexion, but also the disorientation at being judged for her tightly coiled afro hair. She had grown up with white people hating her hair but had never imagined she would encounter similar attitudes in a black community. “I didn’t know there was value attached to different textures” she says as she recalls her time in Atlanta. “ Growing up in a very white environment I assumed most mixed people had hair like mine. When I took my braids out, I was seeing this guy at the time, and he was just disappointed with my texture. I quickly learnt there was this expectation that someone who looked like me would also have “good hair.”

Years of using chemical relaxers followed, until Dabiri moved to London to read, and later teach, African Studies. She eventually ditched the chemicals, an act she believes aligned her hair and politics. In the book, Dabiri underscores the idea that today’s black feminist thought should extend far beyond the hegemonic culture of beauty. She deconstructs our social value systems, and with it, the idea that beauty is all about the visual with thinking from Nigerian feminist scholar, Oyèrónkẹ́ Oyèwùmí. Anti-capitalist thinking around the short-comings of the Black Is Beautiful campaign of the 1960s, and the natural hair movement is also interesting.

“It’s 100% helped, god yeah,” Dabiri says, of the social media-led discourse around black hair over the past few years. “But sometimes I think nuance is lost on the internet.” Don’t Touch My Hair explores the cultural significance and global influence of black hairstyles, arguing that before our braiding patterns were co-opted by the Kardashians, they were shaped by African fractals and architectural maps, and even used to transport secret messages between slaves. Dabiri’s writing challenges Western notions of black inferiority in Africa and reinvigorates the way we, as black people, think about our hair; the time it takes, the value we place upon it.

Colonialism has stripped the continent of a rich and vivid history, and our hair is increasingly seen as arduous and time-consuming, but as Dabiri argues, if we can reclaim that time and enjoy the process, we can further liberate ourselves from oppressive thinking. “The time it takes to do black hair is, quite frankly, the time it takes to do it” she says in the book — a phrase which really stood out to me. It’s interesting, I note, that whilst black hairstyles are in some ways seen as timeless and precious, we’re all moan about getting them done in the salon.

“Traditionally in Africa, time wasn’t imagined with the same linearity as it is within Judeo-Christina culture,” Dabiri explains. “Our hair is time-consuming in an imposed capitalist system where the priority is the maximisation of profit. There isn't much time to do the maintenance for Afro hair, but that's not because our hair is deviance, it’s because the system that we live under has been organised with different priorities.”

It’s easy to see how Dabiri has become well-known in the media, with a range of TV and radio presenting gigs under her belt. And she’s made a point of wearing natural, black styles when on-screen in order to normalise them. When I ask her about being recognised she explains that her hair still provokes a lot commentary. “It's often lovely, like, I'm not complaining about it at all” she starts. “But it's being remarked on with such frequency that it's still not normal. I'm not going to see that many people with hair like mine walking down the street.”

This is true. But we both agree that attitudes are slowly changing. “There’s conversations happening now that were not happening ten, or twenty years ago” she notes. Another book is on the cards she confirms, but first her PhD needs to be finished: “hopefully this year”. In-between that, as Dabiri is pregnant, there’s the whole having a baby thing to do, too. She doesn’t seem phased by any of it. It doesn’t look like she’ll be slowing down any time soon.

More like this
What The UK Blocking Scotland’s Gender Recognition Bill Means
By Sam Ramsden
Gen Z Are Twice As Likely To Identify As Queer, According To New Data
By Sam Ramsden
This Dark Humpty Dumpty Theory Will Haunt You
By El Hunt
Ben & Jerry’s New Sundae Flavours Are A Chocoholic’s Dream
By Sophie McEvoy
Get The Very Best Of Bustle/UK
Sign up for Bustle UK's twice-weekly newsletter, featuring the latest must-watch TV, moving personal stories, and expert advice on the hottest viral buys.