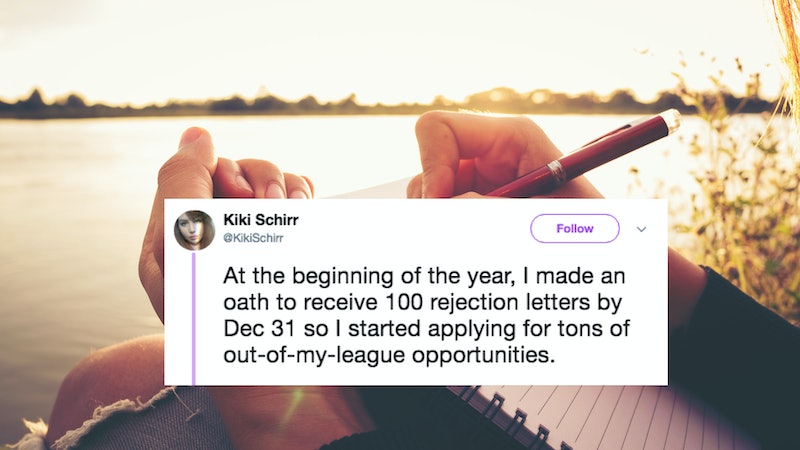 No one likes to talk about rejection. It’s painful and personal and typically tied to shame. However, when writer Kiki Schirr shared her “rejection goal” on Twitter, it opened up a conversation about success a lot of people didn’t realize they needed to have.

“At the beginning of the year, I made an oath to receive 100 rejection letters by Dec 31, so I started applying for tons of out-of-my-league opportunities.” Schirr (@KikiSchirr) tweeted, adding that a handful of her expected rejections actually turned into acceptances. She ended the tweet with three simple words: “Take more chances.” The tweet quickly went viral and has since been liked and retweeted tens of thousands of times.

I started to apply to opportunities that I considered beyond my reach.

In the spirit of her viral tweet, Schirr spoke to Bustle about rejection, acceptance, and using both as a measure of success.

“As the end of last year was approaching, I was in a dark place professionally,” Schirr shares over email, mentioning the video chat startup Wekiki.party she founded and was dedicating most of her time to. “I wasn’t bringing in a lot of money and I wasn’t sure what I wanted to do with life in general. ...and that’s a doozy to think about!”

When we feel in a rut professionally, it can be hard to find our way out. Not knowing where to start can be stressful not to mention scary. (Schirr says this experience also caused her anxiety, personally.) Schirr says she initially tried reframing the situation in her head, thinking of each new opportunity she could apply for as one small piece of a larger puzzle. “But even that seemed daunting.”

“So I told myself that it wasn’t about acceptances at all,” Schirr says, and so she began “collecting” rejections.

“This had a slightly unintended consequence in that I started to apply to opportunities that I considered beyond my reach,” Schirr says, admitting she applied for positions she previously wouldn’t have, opportunities that seemed so unattainable she wouldn’t have given them a second thought. While few of those long-shot applications may have panned out, other opportunities did end up coming her way because of her failure-based experiment.

“One thing that I didn’t make clear in my tweet or even my Medium post [explaining the experiment] is that while applications are great for jobs that exist, it would seem that many opportunities never have an application process, but instead, are directly offered to people who are known to be looking,” Schirr says.

One of the biggest parts of finding ways to progress in your career is putting yourself out there. A piece of career advice everyone should abide by is, quite simply, don’t say no to yourself before you’ve given someone else the chance to respond. Don’t let your default assumption be that you’re too unqualified or not a good fit if it’s an opportunity you’re excited about. Basically, don’t preemptively reject yourself.

“If you begin to put yourself out there, many opportunities begin to arise seemingly out of the blue,” Schirr says.

This rejection project came with its own set of flaws and failures. In her Medium post, Schirr details some of the caveats to the project. For example: “If you apply to 100 colleges, you’ll likely go broke.” Schirr recommends prioritizing certain goals based on finances or counting applications rather than just rejections if you work in an industry where not hearing back happens frequently. “If I had it to tweet over, I would, but maybe with my flaw list attached,” she says to Bustle. “The last thing I want is for my idea to cause people stress!”

A couple other amendments to keep in mind: “The number of rejections doesn’t correspond to the amount of success received in return, which will vary person to person, country to county, and industry to industry.” Schirr also admits to Bustle, “It’s kind of tiring, and when you’ve reached a good stopping point, you shouldn’t blame yourself for not reaching 100.”

Schirr admits that not all the responses have been positive, with some critiquing her tweet as a “humblebrag” or that her individual circumstances have benefited her in this process. “To varying degrees, these aren’t unfair criticisms,” she tells Bustle. However, the overwhelming number of positive responses and messages saying how much her story encouraged others to put themselves out there “have more than made up for any sting the criticism caused me.”

As much of Schirr’s work involves ghostwriting for crypto firms, she isn’t able to namedrop specific successes. However, she shares, “I just recently put in an application to my dream job and yesterday they asked me for my salary expectations! So there’s a chance that I’ll soon be writing for my ideal outlet!”