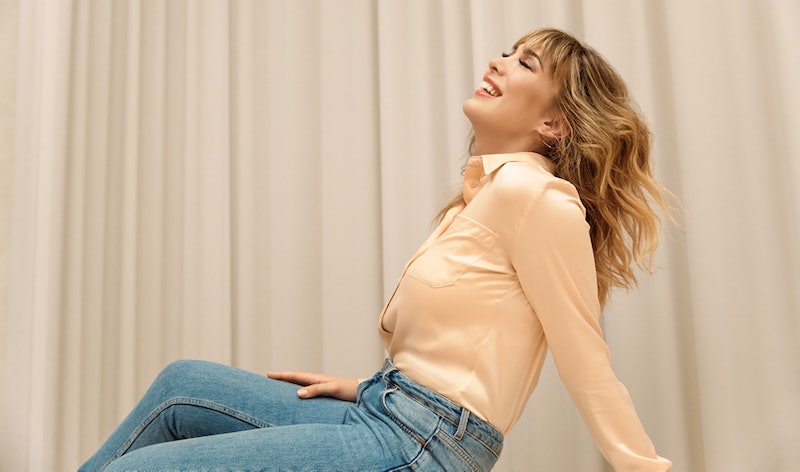 Whether you’re a fan of the full glam look or are more neutral about beauty, you can’t deny that how you look can play a massive part in the way you feel. The newest member of the Pantene Power Squad knows how a new haircut or colour can transform your sense of yourself. I spoke to writer and activist Paris Lees about the power of hair and why representation really matters.

When you look at Lees’ career it’s hard not to think she’s spent the entirety of it smashing glass ceilings. Using her platform to discuss trans rights and the right to express yourself, she’s written for the Guardian, Vice, The Independent, and appeared on Channel 4 News and Question Time. In 2018 she was appointed Vogue's first transgender columnist and used her first piece to talk about the life-changing power of going blonde.

Even a decade ago people wouldn’t be able to switch on their TV and see a trans person representing a beauty brand and it’s this kind of representation that Lees says truly matters. I spoke to her about growing up trans and working class, the bullying she’s experienced, and how important her hair is to her.

Alice Broster: How did you feel when Pantene asked you to be part of the Power Squad?

Paris Lees: I was so happy because I spend a lot of time looking after my hair. It’s a bit of an obsession of mine. It felt like the most natural thing in the world for me to do.

When I was growing up, the only time that I saw a trans person in the media they were presented with ridicule, pity, or disgust and that’s really tough when you’re growing up. The idea that we would be in advertising and be celebrated would have blown my mind as a kid.

AB: How important is hair to you?

PL: I held back on going blonde for so long but I knew it was coming. I always resisted the break-up haircut stereotype but my last break-up was really tough and I knew I needed something because I didn’t want to look like his girlfriend anymore. I think hair is a really important part of identity and going blonde marked a new chapter in my life.

AB: How important do you think representation is?

PL: It’s so important. People who are being born today are being born into a world where trans people appear on the front cover of magazines, they win awards, they talk about politics, and they appear in hair campaigns.

People talk about tokenism and brands ticking boxes but I don’t think that’s a bad thing. I’ve had to beg, steal, and borrow to get where I am today so if you can use the thing that’s held your back to your advantage why shouldn’t you?

AB: Do you think the trans community is being better listened to now?

PL: I think there’s been a huge change in the last five years. I feel like I’m hearing more from trans people now that I was a decade ago. The only times you would see trans people on TV were in miserable documentaries about surgery that were framed by people who aren’t trans and made them look to like an oddity.

It scares me sometimes, the hostility towards trans people, but I would rather die than to give in to that bullying. I was bullied violently throughout school and grew up in a house where I didn’t feel loved. I had a really unhappy childhood and I would die fighting so kids growing up now don’t have the experiences that I had.

AB: You’ve spoken very openly about being working class, trans, and the bullying you went through at school, how do you think that’s shaped you?

PL: I often feel like that being working class is more of a barrier or I’m more conscious of it than being trans in 2019. It’s very frustrating because I think often when people see a trans person that’s all they see. When people see me on Question Time they think "that’s a trans person on TV" and they’re not thinking I grew up in a working class home. People forget about that because you can only be one thing at once. I know that for my friends who are trans women of colour that added an extra layer of difficulty that they had to deal with.

AB: What message would you like to get across with the Pantene campaign?

PL: Everybody deserves to have a good hair day and everybody deserves to feel great. On a very basic level I think trans people have been denied the ability to walk down the street and actually feel good about yourself. If you grew up like I was, being told that you’re less than, you’re going to end up hating yourself. I’ve had those days where I’ve been walking down the street with the sun on my face and wind in my hair and I’ve been reduced to tears because I’m so happy. It makes me sound overly emotional but I didn’t always know it was possible to feel like that.

More like this
TikTok’s New Beauty Hack Involves Drying Your Hair With A Pasta Strainer
By Catharina Cheung
Wavy Hair Girlies Rejoice, Rhyme & Reason’s Wave Revival Regime Is Here
By Darshita Goyal
Indiyah's New Boots Beauty Box Is For Heartbreakers Everywhere
By El Hunt
Gen Z Are Twice As Likely To Identify As Queer, According To New Data
By Sam Ramsden
Get The Very Best Of Bustle/UK
Sign up for Bustle UK's twice-weekly newsletter, featuring the latest must-watch TV, moving personal stories, and expert advice on the hottest viral buys.