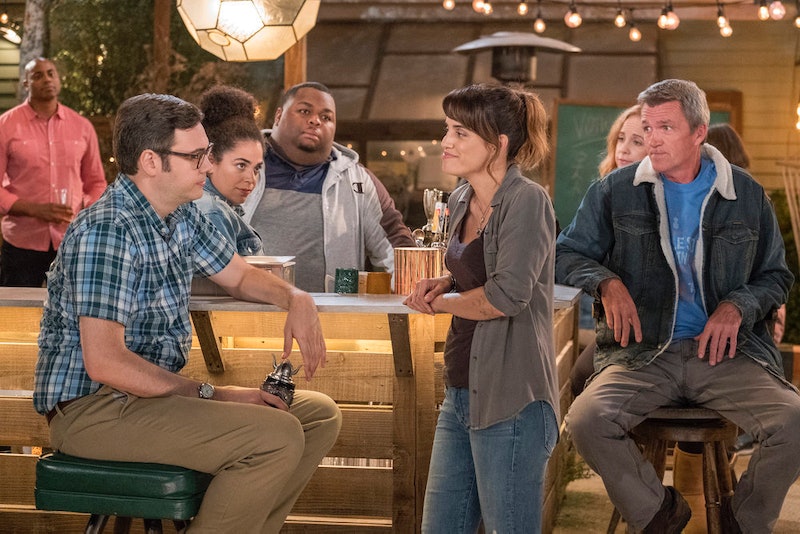 Imagine you're watching a show set in a bar that features a variety of regulars talking about their lives and commiserating over a drink. It's a multi-cam sitcom filmed in front of a live audience. If you're in the late 20th century, chances are you're watching Cheers, but if you're in 2019, you're probably watching NBC's new show Abby's. The series has already drawn numerous comparisons to Cheers, and rightly so — it has a similar feel. But as much as the comedy will remind you of classic sitcoms, it also breathes new life into the genre. Basically, it's a show for anyone nostalgic for TV's so-called "golden days," but who also wants something more suited to the era we're actually living in.

The multi-cam sitcom may not be as popular as it used to be, but the genre never really went away. While many shows these days follow a single-cam format — Modern Family, The Good Place — that doesn't mean it's the only thing that works. Long-running shows like The Big Bang Theory and reboots like The Conners and Will & Grace are proof that familiar multi-cam properties are still successful on network television. And though Abby's isn't directly inspired by Cheers, the show's team welcomes the comparison.

"The Cheers comparisons have been what everybody talks about, and listen, we’ll take it," Abby's star Natalie Morales told The New York Times. "That being said, there have been a lot of medical shows, a lot of law shows, and people hang out in bars a lot. So we were like, 'I think it’s fine to do another bar show.' The differences between the two are plentiful, as Abby's doesn't take place in a Boston pub, but instead a backyard patio that has been turned into a beer garden. Abby's doesn't just take a familiar bar setting outside, it also takes the entire production outside in front of an audience assembled to watch the outdoor filming of the show. It's a new spin on the old multi-cam sitcom formula, and allows the show to stand out."

Abby's creator Josh Malmuth also joked during a Television Critics Association Q&A that "it's a nice comparison" but he thinks their show "is much better." "I think it will have much greater cultural impact," he quipped, according to Deadline. And executive producer Mike Schur, also known as the creator of Parks & Recreation and The Good Place, revealed that they stopped "trying to outflank that inevitable comparison ... There is no way to beat that show. If you can get in the conversation with that show it's a dream come true."

Yes, there are some similarities between Abby's and Cheers — it has a live audience, it's set in a bar — but there are also several marked, important differences. The show centers around a single woman running her own business, which would have been a novelty when Cheers aired, but fits the present moment. And moreover, the titular character is a queer Cuban woman. Let's be real: that never would have happened on Cheers.

The show definitely has the same relaxed, familiar vibe that made Cheers so beloved, but it brings something different to the table, too. So if you love a good throwback but are in need of something a little more new and modern, Abby's might be the perfect thing to add to your watchlist.

More like this
Shonda Rhimes' Net Worth Makes Her One Of The Wealthiest People In TV History
By Hugh McIntyre
The Best 'Grey's Anatomy' Intern Moments, From MAGIC to Glasses
By Grace Wehniainen
Kidnapping Victim Jan Broberg Is Prepared For A Friend Of The Family Criticism
By Brad Witter
'The Rings Of Power' Episode 7 Will Feature An “Unlikely Pairing Of Characters”
By Grace Wehniainen
Get Even More From Bustle — Sign Up For The Newsletter