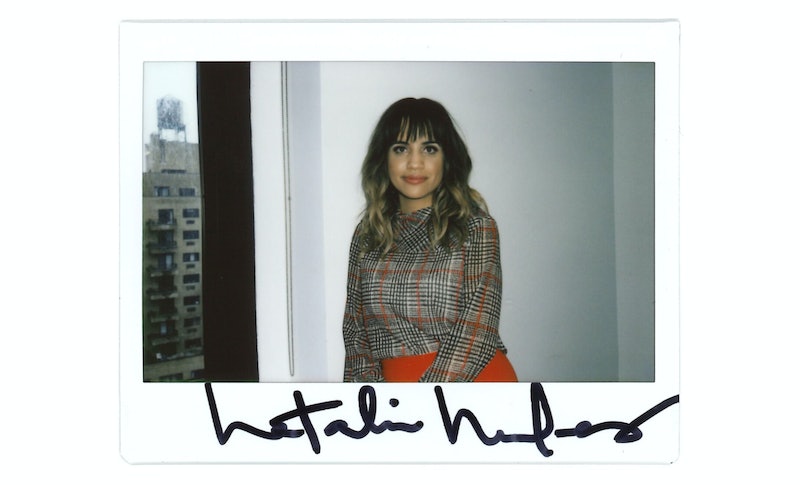 When celebrities hang out with Bustle writers, we want to give them the chance to leave their mark. Literally. So we hand them a pen, a piece of paper, a few questions, and ask them to get creative. The rest is up to them. This time, Abby's star Natalie Morales is leaving her mark in the Bustle Booth.

Abby's is open for business when the NBC sitcom premieres on March 28. The main bartender behind this backyard institution is none other than Abby herself — a bisexual, Marine veteran of Cuban descent — played by Natalie Morales. Morales has been popping up in shows like Girls, Parks and Recreation, The Grinder, and Santa Clarita Diet for years, but now it's her turn to run the bar and the show. And the significance of being a Latina starring in a major network sitcom is not lost on her.

"It's nice to see the world around us reflected on television. It's a huge deal for me," Morales tells Bustle. "I didn't really see anybody like me growing up on television. I loved Princess Jasmine cause she kind of looked like me the most and I was like, 'I can relate to that.' So it's really cool."

Besides her ethnicity, Abby's sexuality makes her an anomaly in the sitcom world. Morales says Abby's creator Josh Malmuth wanted to make Abby's sexuality "one of the many things about her life." She adds that showing a multifaceted person and not just focusing on specific traits "makes for a more interesting character, and it's more realistic, and it normalizes it so much more."

Part of the normalization comes from how Abby's customers/friends treat her. While newbie Bill (Nelson Franklin) needs a moment to adjust to her sexuality, the other regulars — Neil Flynn's Fred, Jessica Chaffin's Beth, Leonard Ouzts' James, and Kimia Behpoornia's Rosie — simply accept Abby for who she is. "That's what happens in the world and that's how it should be," Morales, who is bisexual, says. And this acceptance of the bargoers' "chosen family" onscreen reflects the actors' real-life bond.

"We rehearse together all day long all week and then we put on a show together, so we're a really tight cast," Morales says. They even sing "Bohemian Rhapsody" as a preshow ritual. "The camaraderie you see in the show is very real. We do have each others' backs," she says. "It wasn't a stretch to play [someone] wanting to take care of these people, because I care about them very much."

The live audience gets to be involved, too. Spectators sometimes can chitchat with the cast in between takes while they get to watch the show. And since Abby's is shot outdoors, that meant sometimes being interrupted by a rogue skunk or the Universal Studios tour passing by. "You kind of all feel like you're in it together," Morales says.

The tight-knit feeling of Abby's also comes from the regulars following Abby's strict set of 162 bar rules. Morales appreciates these rules — particularly, no blended drinks and no cell phones. But before you start thinking the actor is exactly like Abby, she notes they have one major difference. "I would never, ever want to have a bar in my house," she says. "That sounds like a nightmare to me."

To learn more about the real woman behind Abby's bar, check out Morales' answers to our Bustle Booth questionnaire below.

More like this
On 'The Handmaid’s Tale,' Christine Ko Fights Back
By Gretchen Smail
Lauren Lyle Is Keeping The Contents Of Karen Pirie’s Bum Bag A Mystery
By El Hunt
'Grey's Anatomy's New Intern Got Advice From Dr. Bailey Herself
By Grace Wehniainen
Constance Wu On Self-Doubt, Family Drama, & Her Sister's Unwavering Support
By Constance Wu
Get Even More From Bustle — Sign Up For The Newsletter