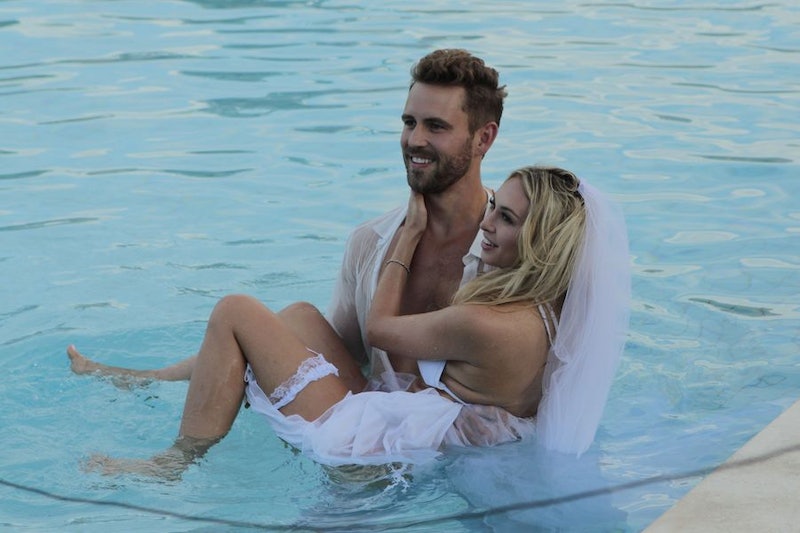 Oh, another season of The Bachelor, another round of slut shaming on the Internet and in America’s living rooms. The victim this time is Corinne a 24-year-old from Miami who helps run her family’s business and once said she has a "platinum vagine." Corinne is very sexually confident, much to the chagrin, it seems, to the other women on the show, and Corinne is forward in her sexual attraction to Nick Viall. I’m here to remind everyone, though, that Nick can choose a Bachelor wife who embraces her sexuality and everything will be just fine. Because, despite what Vanessa made it sound like in her talk with Nick, "wife material" and "openly sexual" are not mutually exclusive.

Corinne has been flaunting her sexuality since the show started, and this has led to many Internet (and fellow contestant) comments of, “why does Nick want someone like that, I thought he wanted a wife" and rumblings that Corinne isn’t wife material because she took her top off in a pool and likes to make out with Nick.

Here's the thing though, Corinne is free to act as she pleases, and it doesn’t somehow negate her from getting married or being “chosen” by Nick as a wife. Corinne can like sex and be wife material, you guys! Unfortunately, many in the Bachelor canon don’t think this way. Even Sean Lowe pushed this line of thinking while watching Corinne on The Bachelor and live-tweeting about it.

There is nothing wrong with Corinne being sexual and wanting to get married. It’s funny that people view women who are sexually open as the antithesis of being wifely, because what is a large part of any marriage, in any culture? Having sex, that’s what. If marriage goes as most marriage is intended, you are having sex with one person for the rest of your life, so you better keep things interesting (if you’re into that sort of thing). Sex is a natural and important part of the marital relationship.

I may not agree with all of Corinne’s antics, but being comfortable with her sexuality is not a reason to condemn her nor to discount her as someone worthy of Nick’s emotions on The Bachelor.