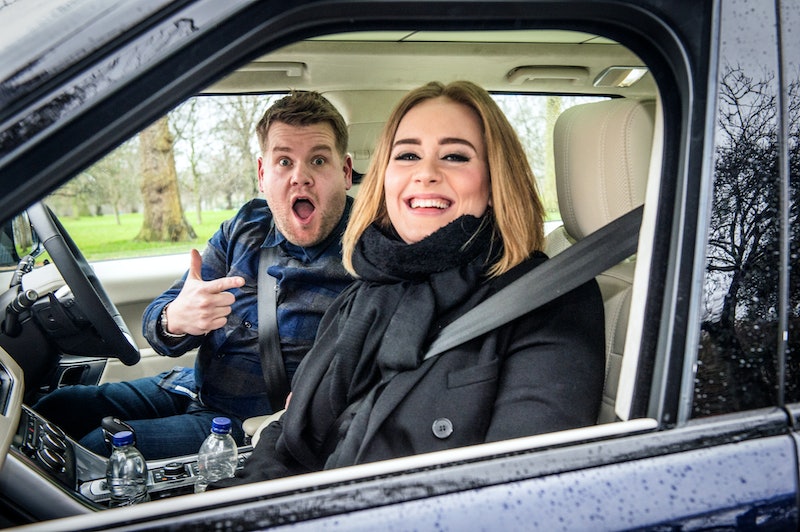 Don't believe everything you see. Believe it or not, James Corden does drive in "Carpool Karaoke," despite the viral video that was tweeted by @zolihonig on Jan. 22 showing Corden and Justin Bieber's car for their upcoming "Carpool Karaoke" segment being pulled by a truck. In a statement sent to Bustle, The Late Late Show with James Corden said, "James always drives during 'Carpool Karaoke.' However, on the rare occasion when there is a stunt component and the producers feel it is unsafe to drive, we will use a rig (tow)."

It's unclear what the "stunt component" entails, but we'll just have to wait until the segment airs. Prior to The Late Late Show's statement, Zoli and other fans expressed shocked over the footage. Zoli tweeted, "Saw James corden and Justin Bieber filming carpool karaoke and this is why I have trust issues — he isn't even driving!" Other fans were surprised that celebs have kept quiet about Corden's apparent dirty little secret. Twitter user @Kerri_may posted, "The thing I’m shook about is how many celebrities maintained this car pool karaoke lie for James Corden. Can we ever trust anyone again? I’m looking at you @MichelleObama."

Based on the footage, it certainly seems that Corden doesn't drive, but that doesn't mean that he's doesn't ever drive. There's also plenty of other evidence supporting The Late Late Show's confirmation that Corden very much does drive during "Carpool Karaoke," as seen below.

According to Jane Krakowski, who appeared in a special Broadway "Carpool Karaoke," Corden does drive during the segment. She told Yahoo Style in June of 2016, "We drove around a few block in midtown Manhattan, over and over again. James Cordon is really driving — he’s a very good driver! — and we're all strapped in. And he's very strict about that."

He Drives Under 20 MPH

Late Late Show executive producer Ben Winston told Vulture in January of 2016 that Corden doesn't "take routes that are difficult." Plus, there are two cars ahead of him and then three behind him. "So he’s moving at under 20 miles an hour, and we don’t let any other cars around him," Winton said. "The second thing is, the cameras are tiny. They’re about the size of your knuckle, and they’re [stuck on] the windshield. So it doesn’t really distract his view."

There are times in various segments when you can see that Corden is definitely in a parking lot for at least some of the filming. For example, around the four-minute mark during his June 2018 "Carpool Karaoke" with Shawn Mendes, the two are on the road discussing Harry Potter and then, like magic, the video seamlessly transitions to them chatting in a parking lot. But, Corden is still driving.

He Often Pulls Over

If you've noticed, during certain segments, Corden parks the car on the side of the road to chat or sing with guests, like when he carpooled with Michael Bublé (around the 5:40 mark). He wouldn't need to do this if he wasn't actually driving on a real road.

This Person Saw Him Driving Before

According to Twitter user @nikkitbfh, they saw once saw Corden driving when filming "Carpool Karaoke" with One Direction in 2015.

So, yeah, maybe Corden isn't driving all the time, but he's definitely behind the wheel.