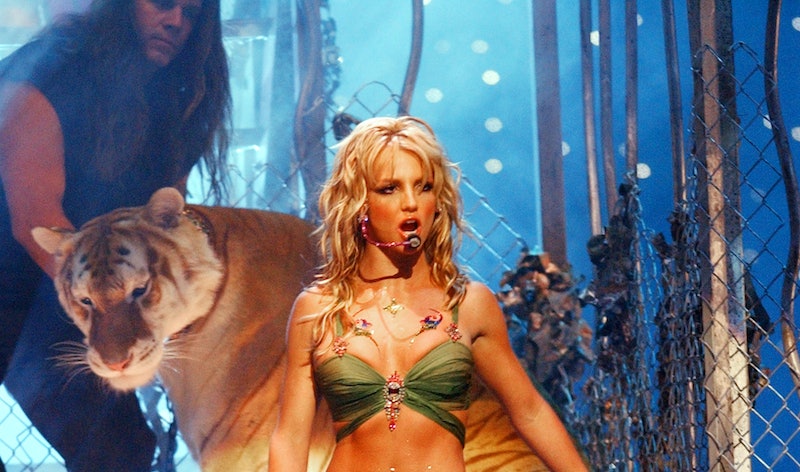 If you haven’t been watching Tiger King recently, then frankly you haven’t been making the most of your quarantine period. This outrageous Netflix show follows the lives of big cat collectors, including Joseph Maldonado-Passage (otherwise known as Joe Exotic) and Mahamayavi Bhagavan “Doc” Antle. While viewers quickly come to learn that Exotic has a passion for being in front of the camera, what they may not know is that this isn't Antle first rodeo either. In fact, Tiger King’s Doc Antle once appeared onstage with Britney Spears during her iconic "Slave 4 U" VMA performance.

Yes, eagled-eyed internet have spotted what is perhaps the best crossover in history. Sporting dark flowing locks, a much younger Antle can be seen in the background of the 2001 performance handling a fully grown tiger in an open cage while Spears steps forward holding that jaw-dropping snake. While Spears is dancing her heart out, Antle can be seen throughout the performance petting the big cat behind her with ease – even going as far as to crouch down beside the tiger at one point to share a cheeky kiss. Show off.

This is one of many instances in which Antle has worked with celebrities, having spent time on film and music video sets that required expert wildlife handlers. According to IMDB, Antle has worked on both Ace Ventura films, The Jungle Book 2 and Mighty Joe Young and has appeared on many chat shows over the years, bringing various wild animals in front audiences all over America.

One of Exotic's former mentors, Antle owns a popular wildlife reserve in South Carolina that has gained criticism over the years for its caging of tigers and lions. Despite this, the safari spot has remained an attraction amongst celebrities including Floyd Mayweather and Shaquille O'Neal, along with the general public who continue to buy tickets every year to visit the wild animals.

You can watch Antle along with Exotic and the rest of the eccentric Tiger King crew on Netflix UK streaming right now.

More like this
You’ve Got 'Love Island’s Farmer Will All Wrong
By Jack Orenstein
Joey Essex Is Rumoured To Be Dating A 'Love Island' Favourite
By Sam Ramsden
Molly-Mae & Tommy Fury Revealed Their Baby Girl's "Really Unusual" Name
By Sophie McEvoy and Sam Ramsden
Barney Walsh Has Been Linked With This Famous Miss World Winner
By Sophie McEvoy
Get The Very Best Of Bustle/UK
Sign up for Bustle UK's twice-weekly newsletter, featuring the latest must-watch TV, moving personal stories, and expert advice on the hottest viral buys.