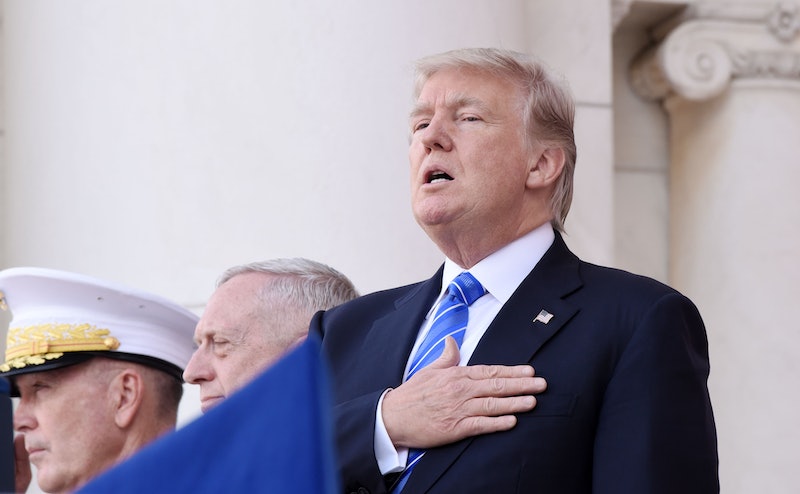 Shortly before delivering remarks to a Memorial Day crowd at Arlington National Cemetery, President Trump raised his hand and placed it on his heart during the National Anthem. No problem there — except Trump sang along to the national anthem as well, and did so in a manner that was perhaps a bit too jovial for a holiday devoted to the somber remembrance of America's fallen soldiers.

Standing next to Defense Secretary James Mattis, Trump started mouthing along to the Star-Spangled Banner right around the " ... rockets' red glare ... " line. He kept right on going until the end, gently rocking back and forth to the music as he lip-synced the lyrics. A good number of people on Twitter found this inappropriate, and took issue with Trump adopting what appeared to be such a celebratory, joyous attitude during a Memorial Day event.

"Trump is swaying back and forth, tapping his hand on his chest & mouthing the words to the national anthem while others stand solemnly," observed Liam Stack, a reporter for the New York Times.

"Trump belted out the National Anthem at Arlington like he was singing a Cher tune in the shower," documentarian Jeremy Newberger wrote. Some speculated that the president was fidgeting out of sheer impatience, while others even accused him of "dancing" to the national anthem, although to my eyes, his actions fall a bit short of a dance.

However you want to characterize it, Trump's behavior during the ceremony wasn't universally mocked. Some on the right chimed in shortly after the brouhaha erupted to defend the president and, just for good measure, mock the people criticizing him.

"I absolutely love it during the national anthem you could see Trump singing the words," wrote Twitter user @nationdivided. "I don't even think Obama knew the words. Trump rocks!"

Some, such as Washington Free-Beacon reporter Alex Griswold, accused liberals of getting upset with Trump merely for singing the national anthem, but that's not quite right. By and large, those who criticized Trump took umbrage not with what he did, but how he did it.

While Memorial Day is an appreciative and optimistic holiday, it's not meant to be a fun one. The point is to be thankful for all of the American soldiers who've died in combat — but "thankful" is a lot different from "happy," and Trump appeared a lot happier while singing that tune than many found appropriate.

This isn't the first time Trump has failed to grasp the emotional nuances of honoring American veterans. In April, he "congratulated" an Afghanistan war veteran for receiving a Purple Heart, the distinction given to military members who are injured or killed during their service. Once again, there's a big difference between paying thanks and celebrating an achievement. That difference often appears to elude the president.

More like this
Juneteenth Is Now A Federal Holiday — Here's What That Means
By Lani Seelinger and Syeda Khaula Saad
21 Funny Memes To Text Your Dad On Father's Day
By Chelsey Grasso, Syeda Khaula Saad and Siena Gagliano
How To Fight For Reproductive Rights, Based On How Much Time You Have
By Courtney Young
How 5 People Upended Their Lives To Fight For Abortion Rights
By Hannah Smothers
Get Even More From Bustle — Sign Up For The Newsletter