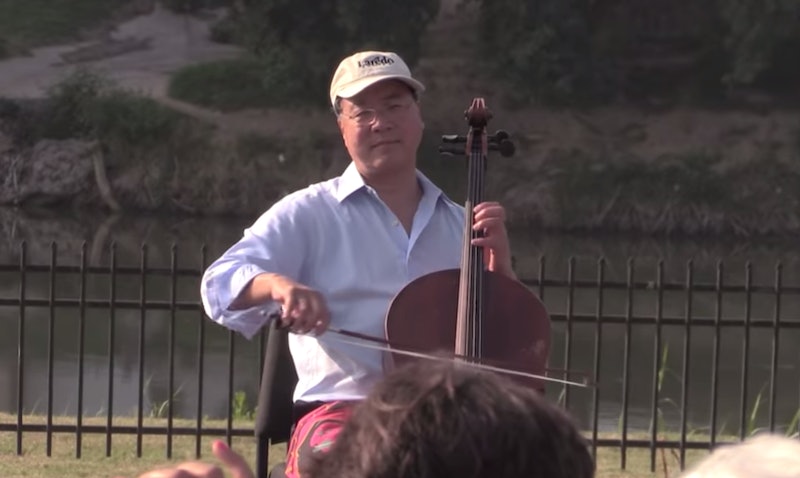 Instead of a packed concert hall, esteemed cellist Yo-Yo Ma performed at the U.S.-Mexican border on Saturday in the towns of Loredo, Texas, and Nuevo Laredo, Tamaulipas. He was welcomed by mayors of both towns and brought a message of unity to the crowd, expressing views that the United States is not "full" — a reference to the president's recent anti-immigrant statements. Texas Public Radio captured the appearance on film.

"As you all know, as you did and do and will do, in culture, we build bridges, not walls," Ma told the crowd in the video. "I've lived my life at the borders. Between cultures. Between disciplines. Between musics. Between generations."

The cellist also read from the plaque on the Statue of Liberty. "I want to read you something," Ma told the crowd. "'Give me your tired, your poor, your huddled masses yearning to breathe free, the wretched refuse of your teeming shore. Send these, the homeless, tempest-tossed to me, I lift my lamp beside the golden door!'"

The music he chose to play, "Suite No. 1 for Unaccompanied Cello" by Bach, allowed for the appearance to fit into Ma's Bach Project. Through the program, Ma has the goal of performing in 36 locations around the world.

The program's website describes Ma's goal as using Bach to talk to our "common humanity at a time when our civic conversation is so focused on division." In March, Ma was in Puerto Rico and Mexico City. Later in April, he will be in Lima, Peru. You can log on to his website to see where all the upcoming performances are.

"The shared understanding that culture generates in these divisive times can bind us together as one world, and guide us to political and economic decisions that benefit the entire species," Ma is quoted on the program's website. "We are cultural beings  — let's explore how culture connects us and can help to shape a better future."

On the border, under the bridge separating the two towns, both mayors spoke. "Although people may perceive us as being so different, we’re not," Loredo Mayor Pete Saenz said. "Here the border is extremely unique in that it’s one organism. I’ve always said we’re interdependent, interconnected. We survived because the border side survives, especially here on the border area."

Texas Public Radio reported that Ma was initially supposed to perform on the international bridge that connects the two Laredos, but in the end, fears about traffic backing up led the planners to settle on two performances. The video taped performance was on the Texas side of the border, near the Rio Grande and next to the bridge. The Nuevo Laredo performance was in Plaza Juarez in Nuevo Laredo, a few blocks away.

In advance of his performance, Ma took to Twitter to talk about the U.S.-Mexican border performance and shared an article about an art project happening along the U.S. border fence. French artist JR has put a picture of a baby on scaffolding near the fence that, seen from the American side, looks like the baby is trying to peer over.

Though Ma's performance and words focused on culture, politics are never far off.