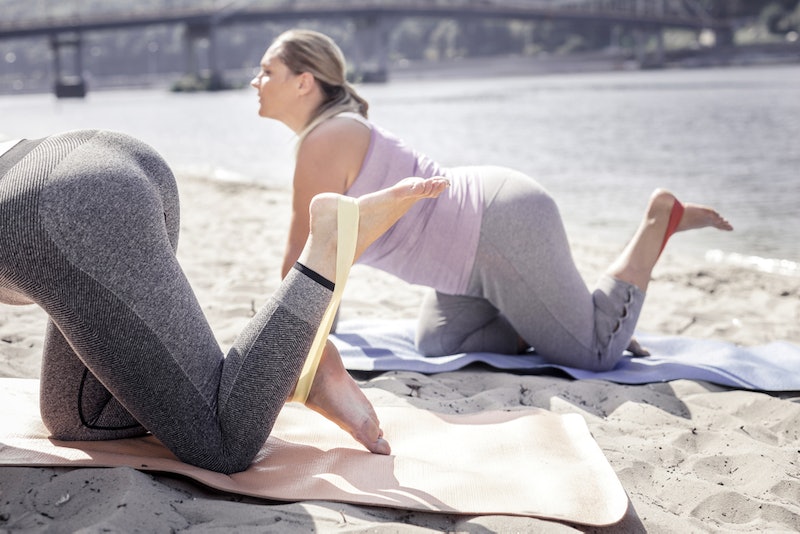 Yoga and meditation are often seen as a fad, but there's lots of science to show that these practice have physical and mental health benefits. In fact, you might think about them as being pretty much, no-holds-barred great for you. However, findings from a large analysis on the effects of yoga and meditation on your health may surprise you more than anything — especially the link between these practices and your sleep.

The analysis, conducted by the fitness product review site FitRated, sourced data from the CDC's 2017 National Health Interview Survey. This annual survey collected responses from nearly 27,000 people across the U.S. about a wide range of health- and wellness-related topics. For the purpose of their analysis, FitRated compared the findings of four main groups: People who practice yoga, people who practice mindfulness meditation, people who practice both, and people who don't practice either.

A marked takeaway from the survey was how many participants said that these two wellness practices improved various aspects of their health. Close to a third of people who meditated and did yoga claimed that their overall health was better than the previous year. This is nothing new: As TIME reported, studies have shown meditation and mindfulness (which is a large component of yoga) may help with stress-related conditions. Considering stress can negatively impact your most aspects of your health for even after a decade after the fact, adopting practices that combat it in the long run is never a bad idea. FitRated noted that these reported health benefits could be partly due to the placebo effect, but still.

Moreover, the analysis revealed somewhat unexpected connections between yoga, meditation, and sleep quality. As John Hopkins Medicine reported, there are some studies that have linked improved sleep to yoga. What's more, according to Harvard Health, research has shown mindful meditation can help fight insomnia. Despite this, FitRated found that there was little difference between sleep quality of people who practiced yoga and meditation, and those who did not.

In fact, people who reported only meditating had the most difficulty falling and staying asleep, followed by the survey participants who reported practicing both yoga and meditation. However, that doesn't mean you should put your daily mindful meditation or yoga practice on the back-burner. As FitRated shared in their analysis, "Perhaps [...] meditators and yoga enthusiasts have adopted these practices to treat a pre-existing problem."

The link between these wellness practices, sleep, and mental health may be a little surprising to some. Though it's somewhat inconclusive — and the likely answer is that more people experiencing these problems are just turning to these wellness practices to help them — more research needs to be conducted to determine why the link exists. What is clear is, both yoga and meditation come with very little health risks (if any), and still boast a ton of benefits. If you're into it, go for it!

More like this
The Best Summer Workout Gear Of 2022
By Carolyn Steber
How To Get Energy Before A Workout, According To Experts
By Carolyn Steber
Watch Emma Raducanu’s Incredible Response To Her Early Wimbledon Exit
By El Hunt
What Forest Bathing Is & Its Benefits, Explained
By Carolyn Steber
Get Even More From Bustle — Sign Up For The Newsletter