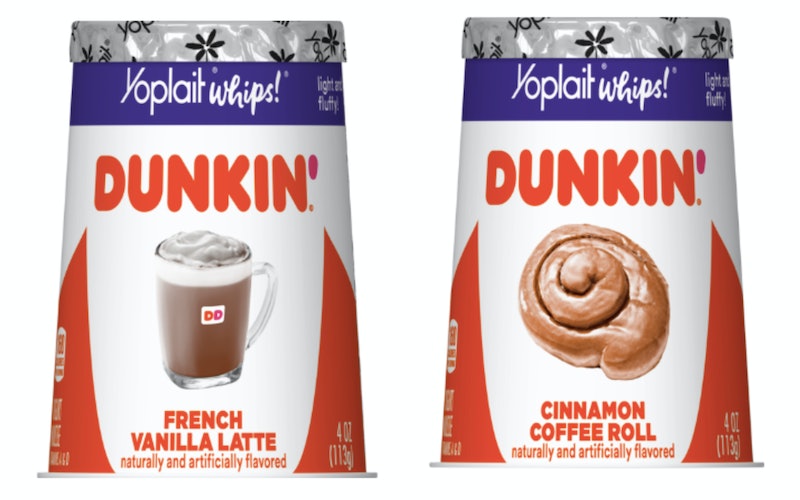 It's already been quite the year for Dunkin' fans, between all of the delicious menu additions and the shedding of the word "Donuts" from its moniker. But one curveball from the chain is coming it right under the wire for 2018 and, to make it even more unexpected, you'll find it in the grocery store refrigerated aisle: Yoplait launched Dunkin' flavors in stores, based on the chain's most iconic desserts and drinks.

The yogurts were first spotted on shelves at Walmart by food Instagrammer @thethreesnacketeers, where they snapped three of the limited edition flavors: Apple Fritter, Boston Kreme Donut, and Cinnamon Coffee Roll. While the collab doesn't seem to be posted on Walmart's website yet, images from Instacart reveal that there is also a French Vanilla Latte flavor that appears to be sold at Food Lion. So we can deduce that these flavors, while not officially on the roster yet, will probably be rolled out in stores nationwide, and aren't exclusive to any particular chain — good news for anybody else who just started uncontrollably drooling on their keyboards.

While there aren't any reviews of the product online to get a sense yet of how it tastes, the photos make it look worth a venture to try it. Truly, when has anyone ever regretted buying a seasonal yogurt?

Interestingly, some of these are Yoplait Orginals — the Apple Fritter and the Boston Kreme Donut — while the other two, Cinnamon Coffee Roll and French Vanilla Latte, are Yoplait Whips. If you haven't tried the Whip version of Yoplait before, it gives the yogurt more of a lighter mousse kind of feel that melts in your mouth. I suppose it makes sense to Whip some of these flavors over the others, although I am curious what the deciding factor is on that, and if there are more still that the internet hasn't yet managed to dig up.

Speaking of yogurt collabs, if you weren't already aware, Yoplait has a similar thing going on with Girl Scout Cookies. Right now Yoplait's website features a Whips flavor called Peanut Butter Chocolate that was inspired by Tagalongs, a Caramel Coconut in Original inspired by Samoas, and a Whips flavor in Thin Mints inspired by, well, Thin Mints. Hopefully that will tide some of us cookie monsters over until Girl Scout Cookie season is finally upon us in 2019.

In the meantime, if you can't find these Dunkin' inspired yogurts yet, odds are they just haven't fully rolled out and it will only be a matter of time until you see them on shelves. Until then you can nurse the ache by heading to your local Dunkin' (NOT Dunkin' Donuts — she is canceled!), choosing the doughnut of your choice, and smushing it into some yogurt, which may sound unappealing in a sentence, but I can tell you from personal experience is quite a delicious way to enhance your dessert. Either way, it looks like we can all look forward to some extremely delicious Dunkin'-inspired snacking come 2019.