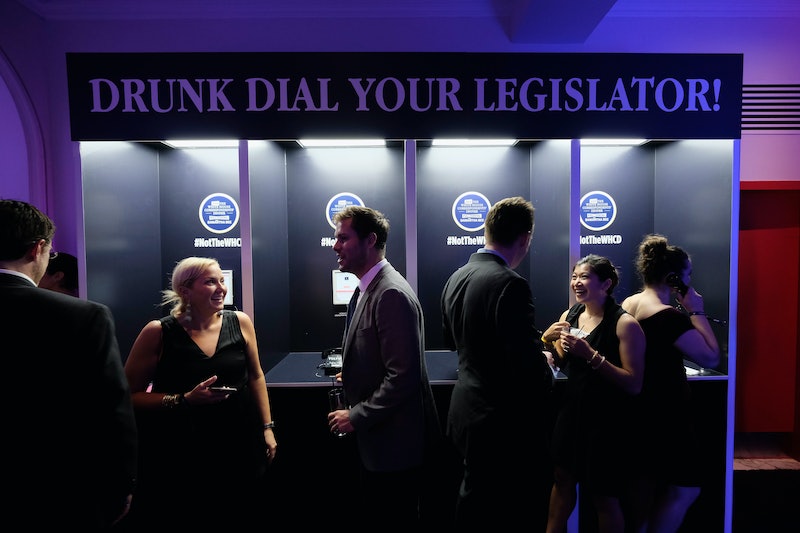 Samantha Bee's TBS special Not The White House Correspondents' Dinner will feature the comedian's trademark biting wit and political commentary, which has propelled Full Frontal to much success in late night TV. Bee and her writing staff's sense of humor carried over to the post-special celebration with a booth called "Drunk Dial Your Legislator" at the after party for Samantha Bee's White House Correspondents' Dinner special. It's so hilarious — and useful — on so many levels. Combining the modern phenomenon of the "drunk dial" with the current push to get our voices heard by our representatives is just genius.

You know what drunk dialing is — nearly everyone has been guilty of making that ill-advised, drama-causing text or (gasp!) phone call to an ex during the late night hours. But in the case of "Drunk Dial Your Legislator," the party is trying to channel that inebriated urge to reach out and contact someone in a positive way at the event, co-hosted by New York magazine and Vulture. Based on social media snaps from the party, the booth has old school phones and tablets, on which the person enters their phone number and zip code before doing the socially conscious deed. The booth looks to be the work of Phone2Action, a digital advocacy and technology engagement company.

And from the looks of those snaps, the booth was also the star of many selfies.

Here's a closer look at what "Drunk Dial Your Legislator" involves.

Party attendees seemed to really enjoy it — and do some good while having a fun time.

Even politicians themselves got in on the action. According to a tweet by Phone2Action, Georgia Rep. Scott Holcomb decided to give himself a call while sober at the party.

It's such a fun way to combine that pesky part of a night out with the political action we should all be taking every day.