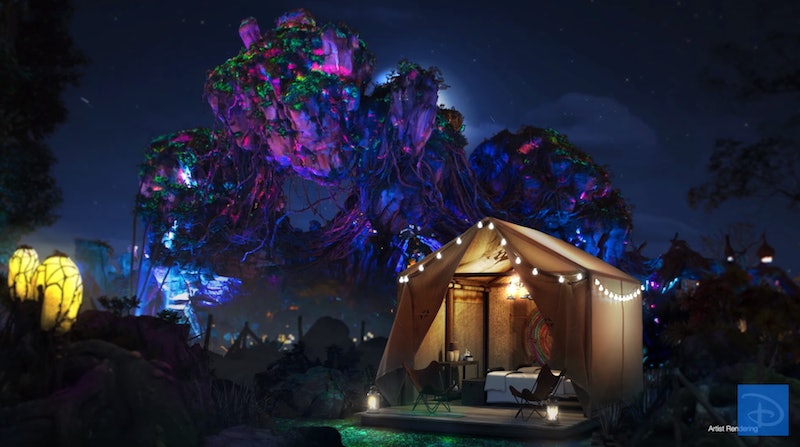 “Glamping” — a portmanteau of the words “glam” and “camping” — elicits strong reactions from most people: Some adore it, while others thing it’s the worst thing ever to happen to the great outdoors. If you fall into the former category, though, good news: Between now and June 21, you can win the chance to go glamping at Walt Disney World via the "D-Camp" contest the resort is currently running. Specifically, you’ll be glamping in the Pandora — The World of Avatar section of Animal Kingdom at the Orlando resort, and, I mean… who wouldn’t want to do that? It’s as close as you’ll get to actually visiting the fictional planet on which the 2009 film Avatar takes place, which sounds truly magical, indeed.

First announced in 2011, Pandora — The World of Avatar spent several years in development before ground was broken to begin construction in 2014. When it finally opened in the spring of 2017, guests discovered a lush, immersive environment that allowed to explore the planet of Pandora as it might look about a generation or so after the events of Avatar. There are only two rides in this area of the park, the Na’vi River Journey and Avatar Flight of Passage; however, the land itself is interactive, responding to visitors who are daring enough to explore it, and changing up in major ways at night. (There are also, of course, restaurants and shops, too.) Pandora became exceedingly popular as soon as it opened, with lines for the rides lasting as long as four hours, according to the Washington Post.

As such, it’s not hard to see how a glamping experience in Pandora might be literally out of this world — and it’s also not a surprise that you’ll have to work to get it: In order to enter the contest, you have register as a Disney.com member, then shoot and submit a two-minute video of yourself explaining exactly why you want to go glamping in Pandora. There are a whole slew of requirements the video has to satisfy, though, according to the lengthy rules document: You’re not allowed to include any personally identifying information, like last names or where you live; you should make sure to shoot your video in landscape mode with good lighting; and you absolutely need to have an original entry.

You also can’t have anyone else in the video with you (and you have to be 18 or older to submit one); you’re not allowed to show any brands or logos anywhere in the video; you can’t use any copyrighted music or sound effects (so, no backing your video with the Avatar soundtrack); and you can’t be “rude or profane” or “wear revealing clothing or display suggestive movements.” Your video should be no longer than two minutes in length and no bigger than 200 MB, although you can submit it in a number of formats: .avi, .mov, .3gp, .mp4, .mpg, and .m4v are all acceptable.

You’ve got between now and the end of the day on June 21 to submit your entry — but then there are a few other hoops you’ll have to jump through, too: Between June 22 and June 28, the first round of judging will occur, determining the finalists for the contest; between July 9 and July 10, the finalists will interviewed by the judging panel via the phone or Skype; then the second round of judging will occur between July 10 and July12, which will determine the Grand Prize Winner. Additionally, four finalists will win $100 Disney Gift Cards as First Prize Winners. Worth noting: The Grand Prize trip itself must occur between July 28 and 31, 2018, so make sure you’re available during that time before you enter; if you’re not, your prize is forfeit and an alternate Grand Prize Winner will be chosen.

If that sounds like kind of a lot, it is — but prize sounds very, very worth it: If you manage to snag the Grand Prize, you’ll win a four-day, three-night trip for yourself and one other guest to Walt Disney World, consisting of roundtrip airfare, transport between the Orlando International Airport and Disney world via Disney’s Magical Express Service (which, speaking from experience, really is magical — you get to bypass the baggage claim and head directly to a bus, which will drop you off at the Disney Resort Hotel you’re staying at… and then your bags just magically appear in your room when you check in. It sounds like a little thing, but it is fantastic), two nights’ accommodations in a standard room at a Walt Disney World Resort Hotel chosen by Disney Online, one night of glamping in the Pandora — The World of Avatar section of Disney’s Animal Kingdom park plus an “exclusive VIP after dark experience,” two four-day Magic Your Way Parkhopper tickets, and a Disney VIP Tour Guide at your service for eight hours on each day, among a few other bells and whistles.

The glamping, of course, is the most exciting part about all of that (although to be honest, two nights comped in a Disney hotel plus free Parkhopper admission is plenty exciting all on its own) — so it would figure that details are scant on what that whole experience will involve. And, I mean, that’s kind of fair; especially since the rules document specifies that portions of the trip might be filmed and used for promotional purposes, you want the winner to be astonished and amazed at each new experience, right? What we do know is that, in addition to being able to explore Pandora at night, the winner will also be privy to “unique experiences and surprises along the way,” including “bespoke drum ceremonies, uniquely catered dishes, a bioluminescent night hike, and surprise guests,” according to the D-Camp website. So, y’know… there’s that.

Disney is well known for offering singular spectacular experiences as contest prizes; periodically, for example, an overnight stay in the Cinderella Castle Suite (which, yes, is located directly inside the castle in the Magic Kingdom) will be up for grabs, although these chances are few and far between. Originally built as a place for Walt Disney and his family to stay onsite while the park was being built — not unlike the apartment above the Main Street Firehouse at Disneyland in California — the space was never used for its intended purpose due to the fact that Walt died in 1966, about five years before Walt Disney World opened to the public. For decades, it primarily existed as a storage space; however, in 2006, the Walt Disney Company decided to renovate it, making it into a decadent suite that only contest winners and folks who receive private invitations can stay in.

Right now, it’s not known whether the Pandora glamping experience will be offered again in the future — but if you want a shot at it, get working on those entries now. Good luck, my friends — and if you win, please send pics so I can live vicariously through you.