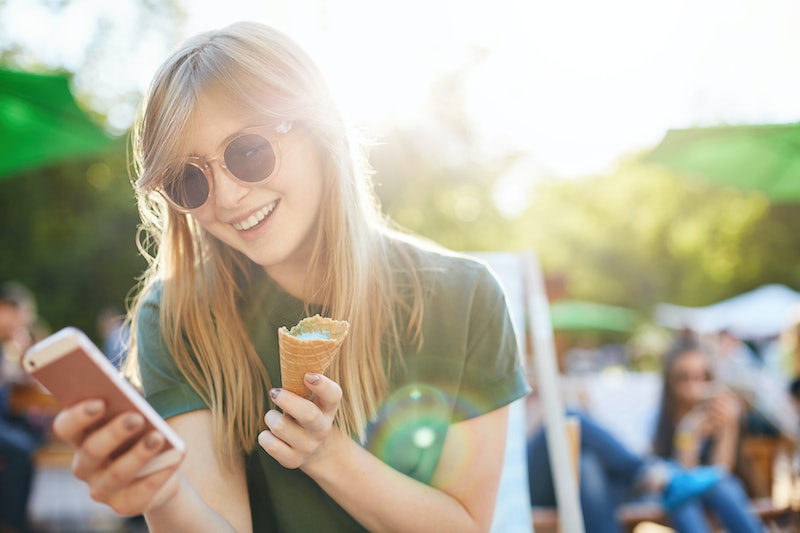 Last summer I received a Facebook friend request and then a "hey, how's it going?" text from a guy I met on a dating app (but never IRL) three years prior. Three years! We talked briefly, exchanged numbers, but never ended up meeting up or talking again — which isn't rare at all for someone you "met" on an app. Confused but also kind of curious as to why he was contacting me out of the blue several years later, I agreed to a date and immediately asked what was up.

"I asked you out after I saw that video of you on a treadmill."

He was referring to a Boomerang I posted on Facebook where I was waving at the camera from a treadmill desk. According to him, he felt like he saw my personality through that 8-second clip.

It's no secret that humanizing our dating app matches/potential matches doesn't always come easily on dating apps. We see a couple (well-selected) photos, a brief line or bio (maybe), and where they went to school or their company's name. We see them on paper, but depending on the app or how well they've filled out their profile, there's not always depth. And many times, how someone comes across in their profile is nothing like how they are when we end up meeting them IRL. But now, Hinge, the relationship app, is looking to change all of that with a new feature that no other major dating app has: video.

"On Hinge we encourage our members to be authentic with one another because we know that leads to the best connections," Hinge CEO, Justin McLeod, tells Bustle. "Our profiles already do a great job, but video creates the opportunity for our members to learn about potential matches in a way that simply can’t be captured with still photos and text."

"Hinge is now 5x more effective at turning connections into conversations. Video adds another dimension to profiles, so I expect to see the number of meaningful conversations increase even further."

Starting June 27, Hinge is letting Members swap any of their six photos with videos in hopes of adding another layer to profiles. And no, these clips aren't meant to be testimonials where you talk in length about what you're looking for (no, please no), instead these are the memorable videos that you've probably shared on Instagram, Facebook or sent to your friends from your camera roll.

Last October, the former dating app ditched the swiping games and became a relationship-oriented app, giving users a totally new platform with social media-inspired profiles and fun questions, like "Next vacation I want to go on" and "Go-to karaoke song", and the app has already seen success. "We’ve designed Hinge profiles to give a full picture of who our Members are, and it’s working," McLeod says. "Hinge is now 5x more effective at turning connections into conversations. Video adds another dimension to profiles, so I expect to see the number of meaningful conversations increase even further.

But it won't stop here. The app says it'll continue to add features to profiles that showcase singles' true personalities. "We’ve heard from our Members that they’re sick of mindlessly swiping and ending up on bad dates that were solely based on physical appearance," McLeod says. "We will continue listening and building out more content on profiles to help our Members make deeper connections, go on better dates, and get into successful relationships."

Now, for the hard part — finding a pool, skateboard, or treadmill desk to shoot the perfect Boomerang.