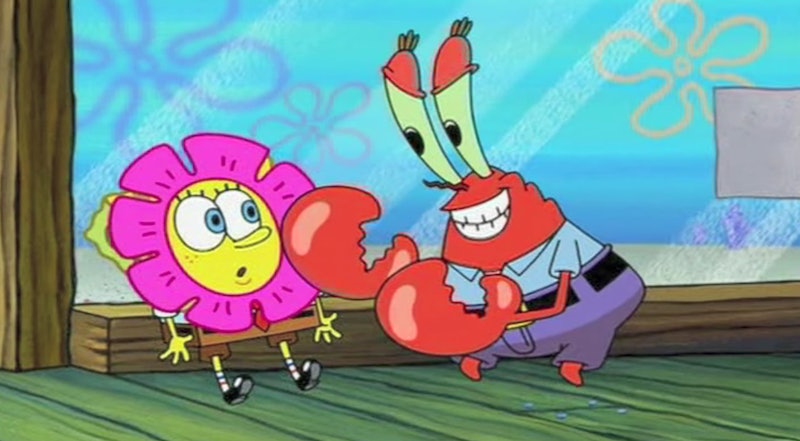 If you'd assumed that the Krusty Krab restaurant owner was voiced by an out-of-work pirate, I have some surprising news for you: the guy who voices Mr. Krabs is an actor that you would recognize. Because it's the same actor who played Captain Byron Hadley in The Shawshank Redemption, aka Clancy Brown. This fact makes the phrase "life is a rich tapestry" finally ring true.

If you're wondering how you can live in a world where an actor can flit from playing an abusive prison guard in an Academy Award-nominated drama to a materialistic (but ultimately harmless) cartoon crustacean in a show for kids, then I guess this just proves actors truly do have the best lives. If you'd been connecting the dots and arguing that it isn't so random, because both Hadley and Mr. Krabs are antagonist figures, then you should know that Brown himself disagrees with you.

In a Reddit Ask Me Anything interview with the Mr. Krabs voice actor, one person referred to the crab as a bad guy. Brown was quick to defend his character:

“No, he's not a bad guy! He's a good guy. He's just a little pre-occupied with money which is not unusual in this day & age. It's been a preoccupation for most of my adult life, society has been preoccupied with that forever, to the detriment of a lot of things."

He continued, "He's not a bad guy, just like your local banker or businessman. He just loves money what are you going to do? He loves Pearl too!"

If you're wondering if this means that secretly, despite being cast as antagonists as varied as Darth Maul’s brother and Doctor Neo Cortex in a Crash Bandicoot video game, this means that Brown is a sucker for a character who's nursing a hidden sweet side, you'd be wrong. While speaking to Matt Gourley in his podcast I Was There Too about his audition to play Captain Hadley on The Shawshank Redemption, he revealed that part of the character's appeal to him was the fact that he's basically human garbage.

When Gourley reminds him of how the prison guard is introduced, as "the hardest screw that ever walked a turn at Shawshank State Prison," he replies "Who doesn’t want to play someone like that, a hard screw?" He also explains that he’s personally responsible for one of the foul one-liners, having developed “Bunch of ball-washing b*stards!” himself.

But if, at this point, you’re feeling deeply uncomfortable with the idea that the voice of Mr. Krabs may or may not have an affinity with evil, don’t despair. Later in the interview, he explains that his audition for The Shawshank Redemption went terribly. When he had to do the scene where he said things like “You eat when we say you eat, you sh*t when we say you sh*t”, he found he would have to say those words to Deborah Aquila, “this very sweet, young casting director, dressed in something very colorful and frilly and she “smelt nice” and he “could not get those lines out.” He ended up apologizing and explaining, “I can’t say this sh*t to you… I can’t do this sh*t to Deb, because she smells too good.”

This worked out great; they hired him because he’s a guy who could come off as an asshole, but who ultimately has a soft gooey center. So, maybe his Shawshank Redemption role isn’t as far from Mr. Krabs as you might think. Unlikely as it seems, both roles required Brown to be two things at once: awful and a decent guy. And that, my friends, is the greatest acting trick of all.

More like this
Every Horror Movie Reference In The 'PLL: Original Sin' Premiere
By Alyssa Lapid
Everything To Know About 'Evil' Season 4
By Meguire Hennes
Does 'Locke & Key’s Ending Mean There Could Be A Season 4?
By Sophia Moore
'The Simpsons' Will *Finally* Address How They “Predict The Future”
By Sam Ramsden
Get Even More From Bustle — Sign Up For The Newsletter