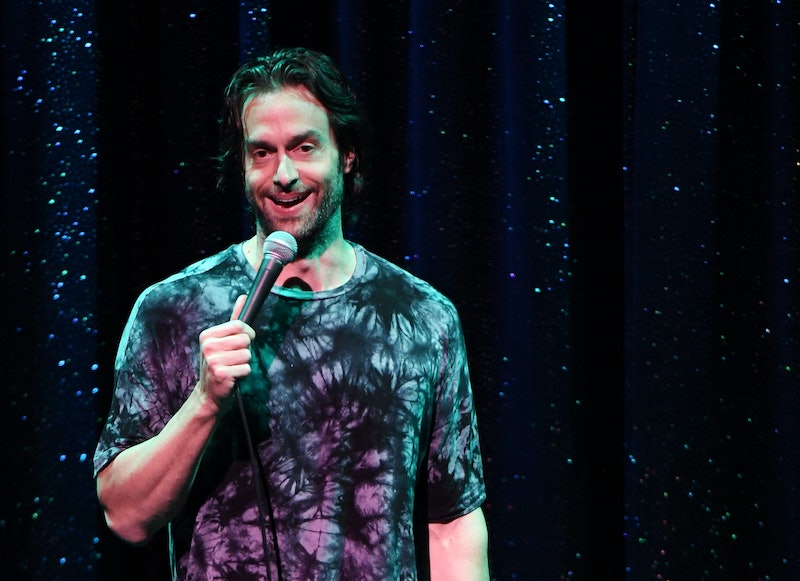 The YOU-niverse is expanding in some more mysterious ways. On Tuesday, Deadline reported that actor and comedian Chris D'Elia is joining You Season 2 for a recurring role. While many details about his character remain under wraps, he's already shaping up to be someone Joe could be best friends with. Or, someone he'd potentially even kill. But then again, who isn't?

So far, it's been revealed via Deadline that D'Elia's You character Henderson is a "designer-hoodie, black Ray-Bans, expensive sneakers-wearing famous comedian with a 'hard-life-lessons man-of-the-people' thing working for him." While it's uncertain if he'll be a friend or enemy or frenemy of Joe's (Penn Badgley), chances are he'll be sticking around longer than poor Benji did in Season 1 given that he has a multiple-episode recurring role for the sophomore season.

While D'Elia is excited about the news, he's even keeping things pertaining to his character a secret. On Tuesday, the actor kept his Instagram post about his casting brief and without details, writing, "We are thankful today! I’m excited to get to work on one of my favorite shows @younetflix! Catch up on the first season on @netflix so you’re ready for season 2!" One thing is certain, the Undateable alum and stand-up professional definitely has the comedian thing down pat for the role.

The first season of YOU was based on Caroline Kepnes' 2014 thriller of the same name. Deadline also reported that Season 2 is "loosely based" on Hidden Bodies, Kepnes' second book in the series which was published in 2016. From what's been revealed already, Season 2 has some similarities to Hidden Bodies. Like the book, Joe will take his sociopathic endeavors all the way across the coast to LA. Also like Kepnes' book, he meets and falls for a woman named Love.

In Season 2, Love Quinn (Victoria Pedretti) is an aspiring chef that isn't nearly as social media-obsessed as Joe's former victim Beck was. Already, this could provide some more obstacles for him next season. (Let's hope.) This is also a slight change from Hidden Bodies, in which Love is a producer/actress/writer/trust-fund-baby, according to Entertainment Weekly. EW's book review also explained that Joe embarks out to the west coast "on a mission of revenge [in] Los Angeles, where his excessive narcissism allows him to fit right in among the Hollywood grotesques." Whether or not his motivations remain the same in the show (and why he'd be on a "revenge mission") remain to be seen. Still, Hidden Bodies could be indicative of how things, namely murders, are going to unfold.

In addition to D'Elia, there's been a group of more talented actors joining YOU's second season. According to ComingSoon.net, Lady Bird actor Marielle Scott has joined the series to play Lucy. Lucy's been described as "an edgy-chic literary agent with a deadpan wit and a sense of humor about her own LA-ness." Further, "Her career-driven nature is balanced by her earthy partner Sunrise and their toddler." Literary agent, eh? Maybe Joe's on damage control for Beck's (Elizabeth Lail) sad demise?

And of course, Victoria Pedretti will play Joe's new love interest, returning to her Netflix home since appearing on The Haunting of Hill House. More new cast members include Jenna Ortega (Jane the Virgin) and Heathers actors Adwin Brown and James Scully. Another familiar face returning to YOU's next chapter is Ambyr Childers, who played Joe's (maybe deceased) ex-girlfriend Candace, so audiences will likely be learning more about their past. And until we learn more, let's hope one of these new characters has what it takes to catch this guy for good.