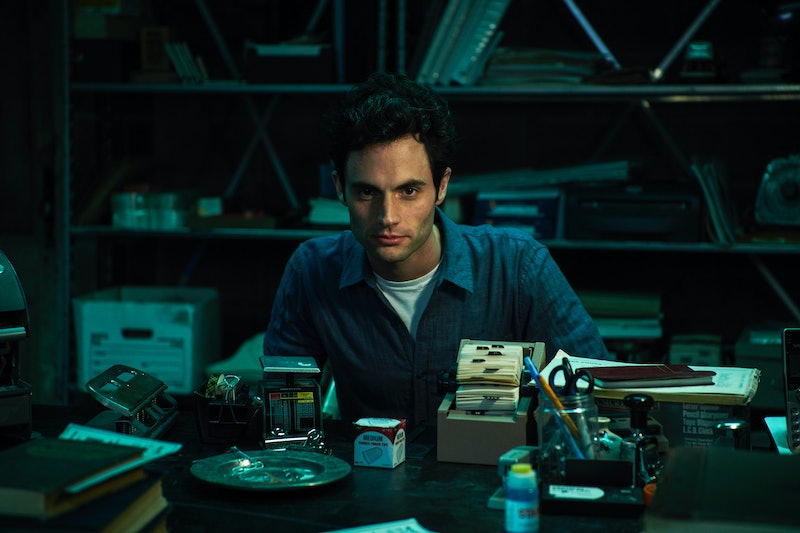 Spoilers ahead for You Season 1. You was an intriguing, twist-filled thriller from the moment it first debuted on Lifetime, and now it's found new life — and renewed interest — on Netflix. Penn Badgley is chilling as Joe, a sinister stalker who ultimately led the show's protagonist, Beck, to her demise at the end of Season 1. But even though Beck's story is over, Joe is still very much on the prowl, and co-creator Sera Gamble says You Season 2 will answer all of your burning questions about his past.

The major cliffhanger people can't wait to see resolved? What happens between Joe and his ex-girlfriend, Candace, who pretty much everyone assumed was dead. Her arrival in the Season 1 finale threw Joe for a loop, and it could change everything moving forward. "You will see what happened in the wake of that cliffhanger fairly quickly in Season 2," Gamble tells Bustle. "Stuff that she says to Joe, that she does to Joe, impacts him to the core in the coming season."

The fact that Candace is still alive is a huge departure from the books by Caroline Kepnes, on which the show is based, but Gamble says they wanted to keep viewers — and Joe — on their toes. "[Her return] came about for two reasons," she explains. "One is that we like to make life difficult for Joe, and the other is just that people wouldn’t expect it."

Still, Candace's reappearance doesn't mean fans of the books will be completely lost from here on out — Gamble confirms that Season 2 will follow Joe to Los Angeles, and "you'll see a lot of characters you love from the second book." But there will definitely be changes that'll keep people on the edge of their seats, even if they're familiar with the original story. "I would say if somebody were to do a scientific analysis, you would probably say that Season 2 diverges from the book more than Season 1," she shares. "But fans of the book know we already changed some key plot points, like what happened to Candace, and changes beget changes beget changes."

The show will also continue to expand upon Joe's past through flashbacks, like it did in its first batch of episodes. "We’re going to explore his backstory further... Something influenced Joe early on. Many things influenced Joe early on. You don’t become Joe Goldberg in a vacuum," Gamble continues. These scenes will explore how Joe became who he is now, but Gamble says You isn't trying to excuse his behavior.

"The conversation in the room inevitably goes to: 'Well, we all know people who had really, really sh*tty childhoods and grew up to kill absolutely no humans,'" she continued. "So I'm definitely not trying to say that if your parents were sh*tty, if you lacked guidance from a guardian, then you'll grow up to kill people, because that's something Joe does that most people never will."

Joe's charm and ability to wriggle out of tight situations make him all the more terrifying: the end of Season 1 saw him bypass all consequences for the murders of Beck, Peach, and Benji, instead pinning it on Beck's therapist, Dr. Nicky. But while Joe is a dangerous and formidable predator, Candace seems hell-bent on stopping him. Only time will tell if she'll escape the fate that befell so many others, or if she'll be another casualty on his list.