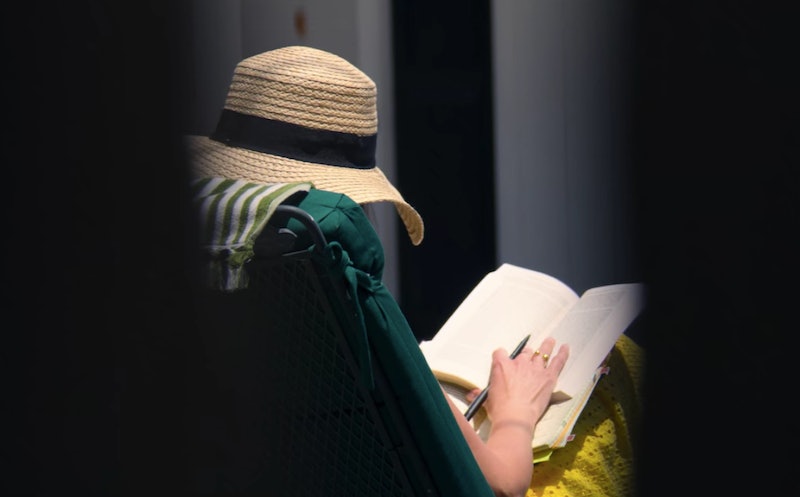 In the final moments of YOU Season 2, Joe Goldberg — now resentfully settled in suburbia and expecting a child with Love — peers into his neighbor's yard and sees a ~mystery woman~ reading. Fans of the show have since put forth the theory that it's Joe's estranged mom sunbathing on the other side of the fence, but YOU star Penn Badgley is here to put it to rest. "She's definitely not his mom," he tells Bustle. "I can say that."

So who could it be? Is it someone else from Joe's past? Someone connected to one of his victims? Yet another complete stranger he'll obsess over and inevitably kill? Let's weigh the options.

Despite all the very clear evidence that Beck is really, truly dead, some viewers still aren't convinced. Reddit user AlbinoStepchild speculates that it could be Beck under a new alias, as this woman — like Beck — is a fervent reader. Among the books stacked next to her chair are Brave New World by Aldous Huxley, Kafka's Selected Stories, and A Guide to Jane Austen.

Another Redditor pointed out that in YOU Season 1, we briefly learned about Beck's sister, Anya. Has she, unbeknownst to Joe, come to SoCal to exact her revenge on him? Beck's mother, stepmother, and stepsister are also out there somewhere, so the mysterious woman could be any number of her relatives, if we're going this route.

Love claims that she killed the young woman who was taking advantage of her brother, but is that really true? Perhaps she survived, like Candace.

Redditor altforlaughs thinks the lady might be Dr. Nicky's wife, ready to avenge the therapist's wrongful conviction. As many fans pointed out, her hands look like they belong to a slightly older woman, so this would track.

A Figment Of Joe's Imagination

"Maybe [Joe] was just hallucinating again and there wasn't actually anyone there," ImProlificSoGifted theorized. "Next season Joe might be a changed man and leave his past in the past." It's not likely, but wouldn't that be nice?

Redditor hearts-and-bones theorized she might be an English teacher (hence the notebook and books). But whoever this mystery woman ends up being, she'd better seal up her fence, stat — or at least beef up her home security. With Joe on the loose, the suburbs aren't so safe after all.

More like this
These 25 International Horror Movies On Netflix Prove Fear Is A Universal Language
By Bustle Editors
Twitter Is Pouring Out Some Zhampagne As ‘Schitt’s Creek’ Leaves Netflix
By Brad Witter
Shonda Rhimes' Net Worth Makes Her One Of The Wealthiest People In TV History
By Hugh McIntyre
'Firefly Lane' Season 2 Will Be The Show's Last — But There's A Twist
By K.W. Colyard and Grace Wehniainen
Get Even More From Bustle — Sign Up For The Newsletter