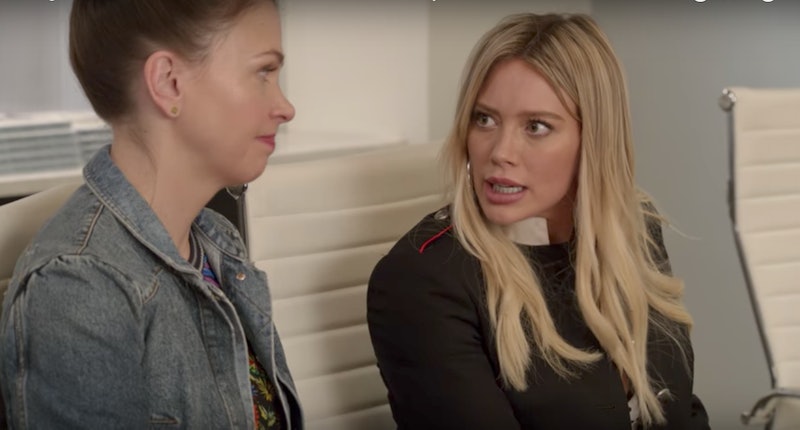 The last season of Younger left fans with many questions. Are Liza and Josh done for good? What will become of Liza's romance with Charles? And, most importantly, will Kelsey and Liza be able to stay friends after her big reveal in the season finale? The cast of TV Land's surprise hit gathered for a panel at the ATX Television Festival to tease the show's 4th season, and the stars dropped a few fun Younger Season 4 spoilers. According to Entertainment Weekly, the show's cast and producers revealed Kelsey and Liza won't make up anytime soon on Younger. The strong friendship between these characters is one of the major draws of the series, but given the circumstances, it makes sense that their reconciliation will take time.

For a bit of background info on Younger, protagonist Liza is a 40 year-old woman who pretends to be 26 in order to land her dream job in the publishing industry. The lie takes on a life of it's own, and soon she's deceived co-workers, friends, and even her own boyfriend. Liza's secret is slowly revealed to those around her, and when the show left off, her best friend Kelsey had just discovered the truth. The ATX panel featured producer Allison Brown and major cast members Nico Tortorella, Miriam Shor, Peter Hermann, and Molly Bernard, EW reports.

The main question on everyone's mind was definitely Kelsey and Liza's friendship. Peter Hermann, who plays' their boss Charles, gave away that some forgiveness might be in the character's future, but not before a period of fighting. "It was really uncomfortable on set when Sutton and Hilary were at odds," Hermann said, according to EW. "Because they’re always like this [gestures with his hands close together] and it was like the kid when you’re parents are fighting. But we were all really happy when further along in the season..."

The producers reportedly cut him off before revealing too much, and while his comments suggest their friendship survives, it's not without a struggle. "The writers did an amazing job not letting Liza off the hook in terms of Kelsey forgiving Liza,” Molly Bernard, who plays Lauren onscreen, told the audience. “It takes a long time. I don’t even know that forgiveness is — something else happens — but Liza is in a dark place for awhile there. Liza has real consequences."

It's not clear what mysterious incident might bring Liza and Kelsey back together, but one has to wonder if it has anything to do with the action packed trailer for Season 4. The sneak peak shows Kelsey bonding with Liza's ex-Josh, and these two are going to spend a lot of time together in the new season. The stars remained tight-lipped over whether or not a romance was in the works, but clarified that they would find comfort in each other. “I think both of our hearts really have been broken by Liza,” Tortorella, who plays Josh, said. “It makes sense that these two characters find each other because they have nobody else that they can talk to about this."

It's a relief to see Liza finally recognize how her secret impacts her friends and family, and hopefully Kelsey will appreciate her honesty and be able to forgive. However, the future of Kelsey and Liza's relationship wasn't the only spoiler that the cast revealed at ATX. According to EW, the characters will also take a trip to Ireland, Lauren will face some challenging times, and the show will delve into Kelsey's backstory.

Show creator Darren Star insisted that this would be the most eventful season yet: “More happens of consequence in Season 4 than almost all the seasons before it,” he told EW. “There’s a lot of growth and surprises that are in store for all the characters.” If the details from the cast at ATX are any indication, then Star might just be telling the truth. After all, deception does have consequences.