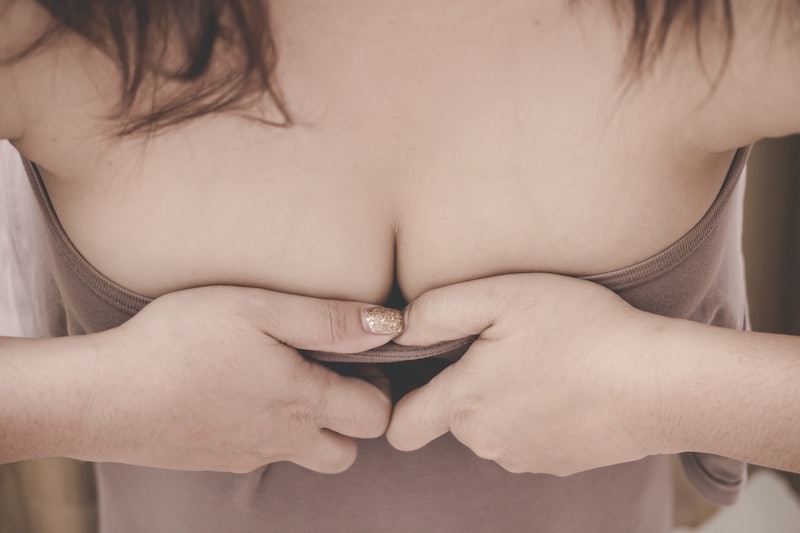 When our breasts feel weird, we often jump to the worst possible conclusions: Does breast pain mean that I have breast cancer? Or are my boobs sore because I'm getting my period — or because I'm pregnant? Am I going to have to appear on one of those I Didn't Know That I Was Pregnant shows now?

Here's the good news: Breasts feel sore for all different kinds of reasons, most of which are nothing to be concerned about. And despite the paranoia that can take hold when anything in our chest area feels off, breast pain is rarely a breast cancer symptom. In fact, the only form of cancer linked to breast pain is inflammatory breast cancer, an uncommon form of the disease which, according to the National Cancer Institute, only accounts for one to five percent of the breast cancer diagnoses in the United States. So unless your breast soreness is accompanied by other symptoms or signs, you're probably in the clear.

But just because you're likely not in danger, that doesn't mean that you should just ignore any aches, soreness, or other unusual feelings in your breasts. When your breasts feel strange, they're usually trying to communicate something. And yes, sometimes, what they are trying to tell you is that your eggo is preggo. But more often, they're communicating subtle messages about your body, your hormones, and even your clothes that come up over the course of your day-to-day life. Join me, as we discover the secret reasons that your boobs feel weird.

1. You're About To Get Your Period

This is likely the most common form of breast pain, and is tied to the body's hormonal schedule. Production of progesterone, a hormone tied to menstruation, peaks in the week before you get your period (around day 21 in a 28-day cycle). This can cause expansion of the milk ducts, small "tubes" located inside the breast, and lead to pre-menstrual breast tenderness. There's no medically proven way to prevent this kind of breast pain, though taking an over-the-counter pain reliever or using a heating pad might help dull the pain after it begins.

According to Johns Hopkins University Medicine, this is what is called a "cyclical" form of breast pain, meaning that it occurs on a regular schedule tied to your periods. If you're getting it every month, right around the same time, you don't need to be concerned — it's normal. Crappy, but normal! In fact, if your cycles are super regular, you can use this breast soreness to actually feel when your period is on its way (and choose which underpants to wear accordingly, maybe). There are definitely some period symptoms you shouldn't ignore, but this one, at least, is business as usual.

2. You're About to Stop Getting Your Period Forever

According to the Mayo Clinic, random breast pain can be a sign of perimenopause —the first stage of menopause, a bodily process in which certain hormones related to reproduction stop being produced. Perimenopause usually begins in one's 40s, but can start as early as your mid-30s — so if you're in that age demographic and are beginning to also experience other symptoms, such as irregular periods, it's worth chatting with your doctor.

But if you're younger, don't freak out that you're somehow going into early menopause if your boobs seem to suddenly be aching at all different times of the month — premature menopause is rare, and the odds that you have it, especially absent any of the other symptoms (like not getting your period) or common causes (like ovary removal), are very, very low.

Progesterone — the same hormone that causes breast soreness during your menstrual cycle — also jumps in production in the early days of a pregnancy. This is why, for many people, breast soreness is a major sign of pregnancy — in fact, according to the American Pregnancy Association, 17% of pregnant people say breast tenderness was the first pregnancy symptom they experienced.

In the event that this information scares the hell out of you (it certainly scared the hell out of me), take comfort in the fact that many pregnant people say that there are differences between pregnancy breast pain and period breast pain — according to Cleveland Clinic, the former is often more intense, and is usually accompanied by other early pregnancy symptoms, like nausea. That said, there are other subtle signs that you may be pregnant to watch out for, so if you're experiencing that in conjunction with breast pain, it might be worth getting a test.

4. You Need A Better Bra

According to Johns Hopkins Medicine, an improperly fitted bra can cause breast pain — a too-small bra can pinch or poke, while a too-large bra might inadequately support your chest buddies, leaving them feeling sore at the day's end.

The good news is that this pain has an easy fix: get a professional bra fitting at your local bra-specialty shop or department-store lingerie section. At a fitting, specially trained salespeople measure your breasts, tell you that you've been wearing the wrong size for years, and then demand that you throw your stretched-out Victoria's Secret Angel bra in the garbage right now. It's honestly a great way to spend an afternoon.

A 1989 study in Nurse Practitioner found that consuming large amounts of caffeine can increase breast pain, especially for people with fibrocystic (read: lumpier) breasts, which are often more vulnerable to breast pain to begin with. Though no follow-up studies seem to have found the same results, the Mayo Clinic reports that many people anecdotally report that cutting down on caffeine lessens their breast pain, especially for folks with breast cysts.

6. You Have An Infected Breast

Breast infections like mastitis almost exclusively effect people who are actively breast-feeding. According to the U.S. National Library of Medicine, those infections usually also involve other symptoms in addition to breast pain, like breast swelling, nipple discharge, swollen lymph nodes, and flu-like symptoms.

The condition can usually be easily treated with antibiotics, so make sure to see a doctor if you suspect you might have a breast infection. Lack of treatment can lead to abscesses on the breast, and other complications that make aching pre-period breasts sound like a free trip to Disneyland.

Physical activities that engage the pectorals — like playing rugby, shoveling snow, or trying to lift a huge chair over your head to win a bet — can strain chest muscles, like the pectoralis major. This strain, which can feel like it's emanating from inside the breast, is actually in the muscle below the breast tissue. While it's a fairly rare injury, it can require surgery to heal in some cases, so please, see a doctor if you think you may have sprained your boob.

This article was originally published on Oct. 3, 2014