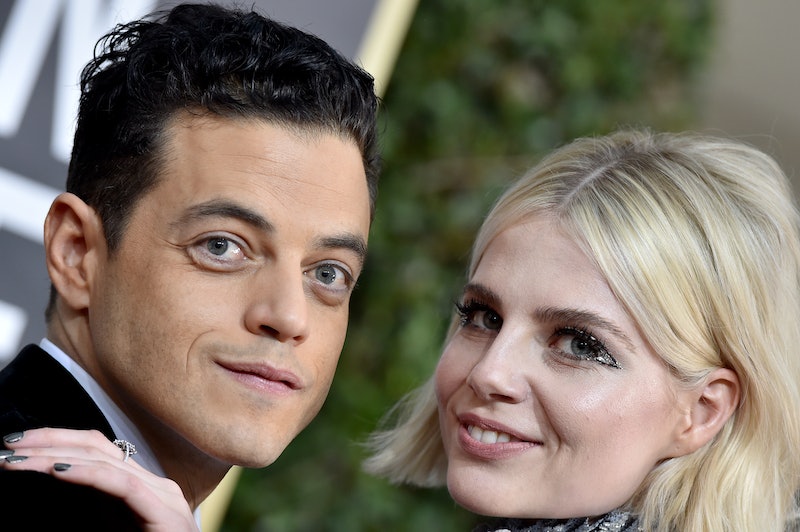 Rami Malek and Lucy Boynton are making their way through their second awards season as a couple. Last year, the Bohemian Rhapsody stars were by each other's side at every ceremony and red carpet; when Malek won Best Actor at the Oscars for his role as Freddie Mercury, Boynton was there to cheer him on from the audience and give him a big, congratulatory kiss.

Malek will return to the Academy Awards on Sunday, Feb. 9 — this time as a presenter, to hand out the Best Actress win — assumedly with Boynton once again at his side. When, earlier this year, Malek was up for Best Performance in a Television Series – Drama at the Golden Globes and Boynton's show The Politician was nominated in the Best Television Series – Musical or Comedy category, they were there together hand in hand.

During their first awards season together, however, the two had been together just under a year (at least publicly). Now that they've been dating for quite a while — and with an Oscars appearance right around the corner — it seems like an apt time as any to take a deep dive into Malek and Boynton's relationship timeline.

More like this
Gemma Atkinson & Gorka Márquez Are Strictly The Sweetest Couple
By El Hunt
John Corbett's Wife Bo Derek Once Revealed If She's Team Aidan Or Team Big
By Alyssa Lapid
Who Is Allison Williams Dating After Her Divorce? She’s Engaged With A Child
By Jake Viswanath
Here’s What Happens To Bill & Frank In 'The Last Of Us' Video Game
By Brad Witter
Get Even More From Bustle — Sign Up For The Newsletter
From hair trends to relationship advice, our daily newsletter has everything you need to sound like a person who’s on TikTok, even if you aren’t.