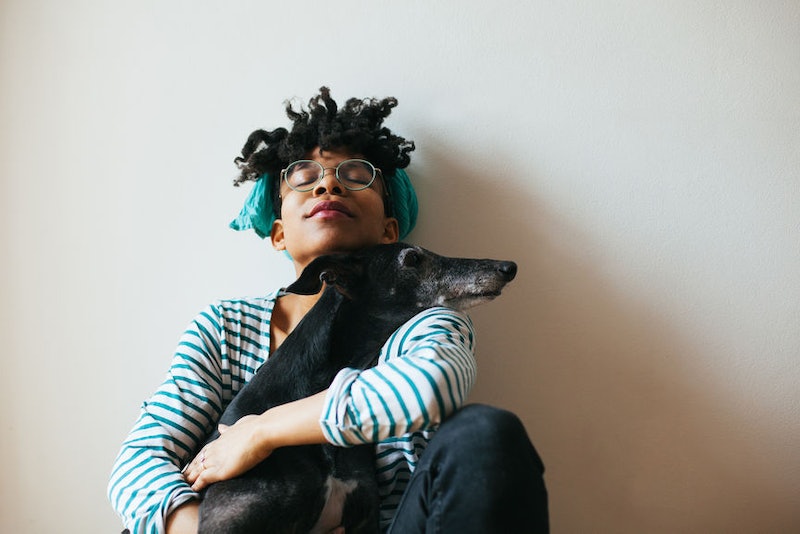 Dogs are pure, sweet angels placed on this nightmare earth to make it a fraction more tolerable, and every new study proves that irrefutable truth a little more. If you ever doubted for one blasphemous second that your dog is a precious ball of love and feelings, please take note of this new study: your dog gets stressed when you do, scientists say — but that might go down if you hug them more.

Researchers at Linköping University investigated "long-term stress synchronization" between dogs and their owners, assessing stress levels in both by measuring the concentration of cortisol, a stress hormone, in samples of their hair. The researchers examined 58 dogs and their owners (all the owners were women, incidentally): 25 border collies, and 33 Shetland sheepdogs. Let's hope they took at least one team photo.

Two hair samples were taken from both dogs and their owners, with a few months between each sample. The researchers recorded how much physical activity the dogs undertook with an activity collar, since being active can increase cortisol levels; they also asked the owners to complete personality questionnaires for both themselves and their dogs, to determine whether certain personality traits influence stress levels.

The dogs' personalities did not have a significant impact on their long-term stress levels, the study authors found — but the owners' personalities did. Lina Roth, a biologist and senior lecturer at Linköping University and the study's principal investigator, said in a press release, "This has led us to suggest that the dog mirrors its owner's stress."

In particular, owners with high levels of neuroticism had dogs with lower levels of cortisol. "There is some indication that humans scoring high on Neuroticism form a strong attachment bond to their dogs and that these individuals, to a greater extent than others, use their dog as a social supporter whilst also simultaneously functioning as a social supporter for their dog," the study authors wrote. "This, in turn, may lead to a positive modulation of the stress response for both parties."

Future research is needed, the study authors point out, to cement the association between owner and dog stress levels. Border collies and Shetland sheepdogs are both herding dogs, for one, meaning they're disposed to "collaborate well with humans"; a more indpenedent type of dog, like a hunting dog, might not demonstrate the same emotional connection.

But future research might allow us to pick the perfect breed of dog for both pup and owner, Lina Roth explained. "If we learn more about how different types of dog are influenced by humans, it will be possible to match dog and owner in a way that is better for both, from a stress-management point of view. It may be that certain breeds are not so deeply affected if their owner has a high stress level," she said.

More like this
Yomi Adegoke On The Offline Diaries & The Power Of Representation
By Jessica Morgan
Meghan Markle’s Favourite Skincare Brand Has Finally Landed In The UK
By Tomi Otekunrin
How To Master Baby Braids, According To TikTok
By Tomi Otekunrin
Coco & Eve’s Just Launched Its First Ever Leave-In Conditioner
By Tomi Otekunrin
Get The Very Best Of Bustle/UK