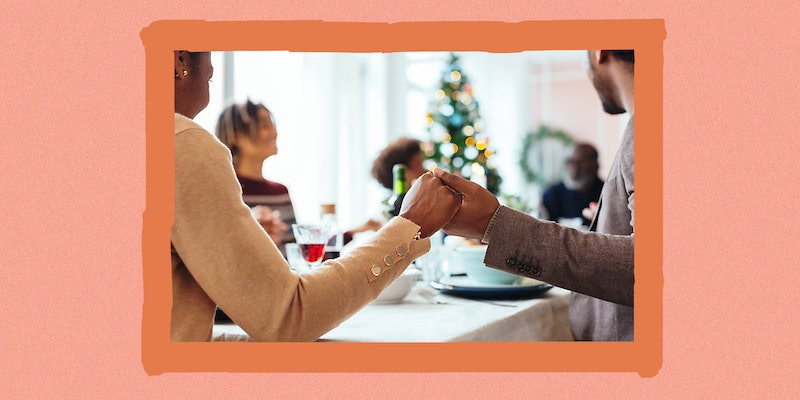 The holiday season is traditionally thought of as a happy, festive time of year, where loved ones get together to exchange gifts, laughs, and memories over food. And while that reigns true for some, not everyone gets that same euphoric feeling during the so-called "most wonderful time of the year" — especially when you've come to expect critical comments about your body from family members.

Since our immediate families are typically the first social institution we come into contact with, there's no question that their ideals on weight, style, or beauty can have major influence on the way we think of our bodies and how we dress, Dr. Afiya Mbilishaka, assistant professor of psychology and researcher at the University of the District of Columbia, tells Bustle. "In terms of our most early memories with families during the holiday time, we can either recall being praised or criticized based on our appearance," she explains. "What larger society values, the family sometimes enforces in a more direct way."

For example, if families are mostly exposed to imagery of little girls with curly hair wearing floral frocks, a child dressed in that manner will mostly likely receive positive attention for their appearance. "That experience gets internalized in terms of feeling accepted and affirmed and wanting to continue to get that reaction," Dr. Mbilishaka explains. "So, [the child may end up] conforming to a certain look."

On the flip side, however, a kid who strays from those ideals may be verbally critiqued for how they dress, which could lead to the development of anxiety when interacting with family during the holidays, the professor says. "Of course, there are families that disrupt those patterns, but that really requires unlearning these unhealthy systems," she adds.

Negative exchanges can also lead to what Dr. Mbilishaka calls "aesthetic trauma," which is a level of distress caused by the critiquing of one's appearance. "I think that these early experiences can set a tone for adolescences or adults that [create] a level of caution in how we present ourselves to our families," the professor shares. She also explains that while people may dress one way during the rest of the year, if they're experiencing this type of trauma when the holidays roll around, they could choose to "reshape their aesthetic" to please their family's ideals and avoid any unpleasant conversations.

But while aesthetic trauma can affect anyone across the spectrum, the idea of conforming to a certain look for the holidays — rather than freely expressing oneself through fashion — can be especially complex for LGBTQ children, editor-in-chief of Everyone Is Gay Kristin Russo explains.

Since most clothing is created with a binary focus, queer or trans children who are already expressing signs of gender dysphoria — and may not have the autonomy to dress themselves at a young age — will likely feel quite uncomfortable, or even confused, wearing specific types of gendered clothing.

"You disassociate from yourself, from your body because you are appearing to the world outside of you as something you don't feel inside at all," Russo says. "It can be serious, it can be really damaging."

And moving into adolescence, when most start to develop their own sense of style, can create another set of challenges as well as for LGBTQ people if they're around family who either are not supportive, or assume their style is tied directly to their gender or sexuality. As a result, LGBTQ teens dressing how they feel most comfortable, or wanting to express themselves through clothing, can ultimately put their emotional or physical safety at risk, Russo explains, even among loved ones.

In addition to this, black and African American families also deal with historical factors that can play a major role in forming perceptions of one's appearance.

"During our enslavement, hair, for example, was something that needed to be controlled or tamed," Dr. Mbilishaka explains. "If your hair didn't have a certain texture, length, or style [similar to whites], either it had to be covered with a scarf or even a wig depending on if you were in the field or in the house."

Thanks to the natural hair movement, the debate of "good" versus "bad" hair isn't as prominent as it once was, but texture discrimination still exists within the black community. A 2015 thesis published by Georgia State University found that people with kinky hair were often underrepresented in the natural hair community in comparison to those with a looser curl pattern. The findings also concluded that even from a social media standpoint, videos and images of people with tighter curls usually got fewer "likes," shares, or positive comments than those with a looser texture.

Colorism is arguably another result of PTSS. And body positive stylist Malia Anderson felt the effects of this first hand. "It wasn't uncommon for people in my family or in our close family space to refer to me as blackie, because I'm extremely dark skinned, or refer to me as darkie or tar baby," she shares. "That made me ashamed of being dark skinned."

But while Anderson says she no longer allows anyone to get away with commenting on her skin tone, the CEO of Style by Malia admits that these comments did have an impact on her personal style when she was younger. "I didn't wear orange or yellow or pink until I was probably 25," she says, adding that she even avoided bright shades of lipstick as well. "That was directly related to people telling me how dark I was ... that I shouldn't shine so much, I shouldn't bring so much attention to myself."

Despite her past experiences, Anderson is now a successful California-based stylist who often has clients come in before a big family event and want to feel good inside and out. What makes the fashion expert unique from her counterparts is that she takes a holistic approach to style, aiming to focus on what her client likes about themselves, rather than what they've been told by others was a problem. "I really start with clients on the inside work, and then build it from there," she says.

The stylist also tells the people she works with that any negative comments they've heard from family about their bodies has nothing to do with them, and everything to do with projection. "It's about who they are and how they feel about themselves," she says.

But ironically enough, while family can be the among the most critical when it comes to how we look, they are also who we inherit our physical features from. This leads Dr. Mbilishaka to believe that families may also be policing appearances our based on their own body insecurities — which can be amplified when food is present. "Often times, the mother themselves has some eating or weight concerns," she says.

Holistic nutritionist Jennifer Sterling has noticed the same trend in her work, and shares that the way people are taught about weight and food's relationship with the body from a young age, whether negative or positive, can result in more than just insecurities — but eating disorders as well.

"If you know that you're going to be around family members who always comment on what your body looks like then you may be more inclined to try and hide your body, or eat [more or] less at a meal based on comments that you've gotten in the past," Sterling explains.

Registered nutritionist Laura Thomas also notes that whether your family is encouraging you to lose or gain weight, any remarks at all can sometimes do more harm than good. "That could create pressure to maintain that weight," she says, adding that these comments can lead to forming unrealistic body expectations. "That disconnect between who we are and who we're trying to be, that is where self-esteem problems thrive."

But while many still struggle with their own body image issues, a 2017 study published by Jama Dermatology proved that beauty standards portrayed by the media are evolving.

From 1990 to 2017, the research found that more people of color, along with older age groups have been included in People magazine's annual "Most Beautiful" list over nearly three decades. Coincidentally, a 2018 thesis from the University of Wyoming determined that over 50 percent of millennials surveyed not only stated that body image was important to them, but also wanted more diversity in ad campaigns. So how can young adults change their own family's views?

Dr. Mbilishaka suggests that while each family has their own set of unique dynamics, engaging in storytelling by asking to see old photos can be an effective way for young people to understand why family members say the things they do. "When we look at some of the pictures of our grandparents or parents when they were our age, [many times] they hadn't mastered their look, or they were dealing with something with their weight," she says, adding that this can be a great way to get a gauge on their experiences in a respectful manner.

For LGBTQ people who don't feel supported by their family, Russo suggests finding community through social media, where one can feel seen and understood. "They have a better chance of recognizing that there is nothing wrong with them," Russo says. She has also created a free holiday e-care package called "Where The Love Light Gleams," that can be a good temporary escape.

But if nothing is working, and year after year, you're leaving these get-togethers feeling uncomfortable, Russo says that there's no shame in skipping the holiday gathering all together. "You are most important, and [you should] want to express yourself," she says. "Being who you are is more important than [worrying about] 'ruining' Thanksgiving."

More like this
An Honest Review of MeUndies Boxers, According To A Non-Binary Person
By Megan Lasher
Androgynous Formal Wear That Will Make You Feel *So* Fancy
By Megan Lasher
Everything You Need To Know About Ephemeral Tattoos
By El Hunt
How To Get Your Hands On The Pat McGrath X Supreme Nail Kit
By Justine Knight
Get Even More From Bustle — Sign Up For The Newsletter